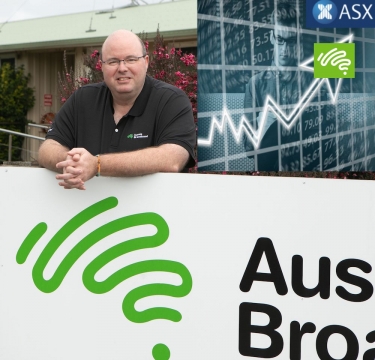 Aussie Broadband is the company that offers "bloody good broadband", so when we looked at its half year results, we thought they were bloody good, too!

If there's anything that will make a competitor's blood boil, it's announcing great results, and Aussie Broadband has been able to do just that in its results that were posted to the ASX this morning.

MD Phil Britt said: “I’m extremely proud of the half year results and the awesome work our team has done."

Britt continued: “In a year with significant disruption to the community and many people and businesses doing it very tough, our team has managed to significantly grow our market share, maintain network performance and further improve our already great customer experience... all during the peak of a pandemic and whilst listing the company on the ASX.

“We have continued to build out critical infrastructure for our network that will shape the quality of our service for years to come, and invested heavily in our Australian team and technology capability, including internal software enhancements and network automation.

“Without the continued dedication of our team, and their commitment to changing the telco game, these results would not have been possible," Britt added.

iTWire interviewed Phil Britt last year in an article entitled: "VIDEO Interview with a Telco Titan: Phil Britt, CEO, Aussie Broadband", and if you haven't seen it, it's definitely worth watching to learn more about the man leading a great Aussie telco and broadband provider.

So, what else did Aussie Broadband report to the ASX?

The company says it "provided 342,634 broadband connections on the NBN and OptiComm networks at the end of the period. The company’s market share of NBN fixed-line and fixed-wireless technologies increased to 4.2%, compared to 2.8% in December 2019.

"Marketing expenses for the period were $9.7 million, 16% lower than forecast in part due to Australia Post suspending some unaddressed mail delivery during COVID-19 lockdowns. Despite the lower marketing expense, the company still exceeded its customer connection targets for the period."

The company explains that since March 2020, "the industry has been receiving COVID-19 CVC relief from NBN which finished in January 2021. CVC usage remains elevated, following highs of 40% above normal patterns during the peak of COVID-19 lockdowns, with Victoria experiencing the highest traffic growth. A similar localised spike in usage was observed during the lockdown of the Sydney Northern Beaches area."

What about Aussie Broadband's fibre rollout?

Here, we're told that "construction on 79km of dark fibre was completed, with 68km connecting 6 data centres and 7 NBN POIs in Victoria, and 11km in New South Wales.

Is there any bad news?

The company notes that "bad and doubtful debts on residential services increased during the period (bad debt expense is $0.5m above forecast), largely due to COVID-19 concessions provided to customers."

How many customers is Aussie Broadband serving?

As noted above, the company had 331,353 "unique" customers on 31 December 2020, so there are obviously over 10,000 customers out there who have more than one Aussie Broadband connection, which is a good sign these customers like the service they are receiving!

What about other product development?

Here, we're told that the company launched its Carbon platform in June 2020, "designed for businesses and managed service providers (MSPs). The platform allows businesses and MSPs to connect, customise and manage services using a fully-automated platform developed by Aussie’s in-house software development team. This has reduced timelines that often used to take months to only minutes.

"The company’s hosted phone system offering has now been integrated into Carbon, making it available to MSP partners and direct business customers. At the end of the period, the company had signed over 300 managed service provider agreements allowing access to Carbon."

In August 2020 the company connected to, and started selling, broadband services on the OptiComm network which primarily services greenfield residential developments. This allows the company to attract and connect customers in new development areas which are not typically connected to the NBN.

A new retail and business mobile offering is expected to be launched in Q4 FY2021 and the company’s existing mobile customers will be offered migration from the current offering to the Optus network. The company will also market to its existing customer base to promote the new mobile offering.

So, what is Aussie Broadband's shared outlook?

The company states that, "as noted by the Reserve Bank of Australia recently, a high degree of uncertainty continues to surround Australia’s economic outlook. The potential exists for further COVID-19 geographic lockdowns as outbreaks occur, with associated bandwidth usage impacting the company’s CVC and network costs. The company expects an impact from the NBN HFC stop sell which has been allowed for in the guidance below.

"In addition, the company is accelerating its investment in marketing in the second half which impacts short term EBITDA but drives long term growth."

As a result, the Board provides the following updated guidance for FY2021:

A summary of the Half Year Results highlights to 31 Dec 2020 is as follows:

Other recent iTWire articles about Aussie Broadband include:

More in this category: « NBN Co pricing review will lead to $2 per customer price rise: Budde Magna offers 5G and IoT solutions with Ranplan Wireless in Asia Pac »
Share News tips for the iTWire Journalists? Your tip will be anonymous