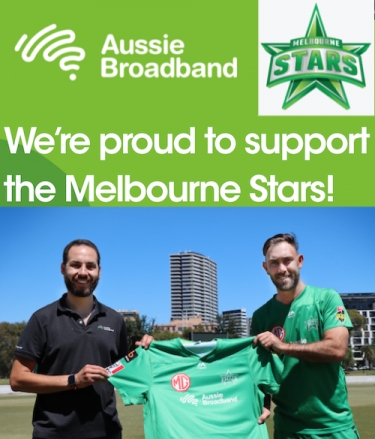 Aussie Broadband is a multi-award winning, fibre networking owning, Internet service provider that has grown from strength to strength, and has a well deserved and well earned reputation as one of the very best Internet providers in Australia.

When a company starts to do really well in the marketplace, and with its customers, you often see those companies getting bolder in their sponsorships. Some companies grow so large that they are even able to sponsor F1 teams, as we've seen with tech companies like Acronis and Kaspersky.

Now, I don't think Aussie Broadband will necessarily ever end up sponsoring an F1 team, as it really is a LOT of money that could be better spent on laying more fibre, but sponsoring a Big Bash cricket team sounds like a great way to get the message out to Aussie who love their cricket and who are likely in need of really great Internet service.

Anyway, the company tells us the partnership “will see Aussie Broadband’s branding appear prominently on all playing and training uniform together with a range of digital and at-venue positions”, and that this is Aussie Broadband’s first such agreement “with a major professional sport”.

The company’s well known and highly respected MD, Phillip Britt, said the company was excited to partner with the Stars for the BBL|10 season, which kicks off against the Heat this Friday.

“We are thrilled to be the Principal Partner of the Melbourne Stars and we're looking forward to working closely with them over the coming months. It's almost as exciting as seeing Stars skipper Glenn Maxwell hit a 100-metre switch hit!

“This is a stellar deal - like the Stars, Aussie Broadband have firm roots in Victoria, but have now grown to compete on the national stage.

“The Big Bash is going to be huge this year, and exactly what all Australians need right now. So, we’re absolutely thrilled to be involved and support such a game changing team,” Britt continued.

“After a tough year, there’s nothing quite like a summer filled with family, friends and things we love, like cricket, to lift our collective spirits.

“We’re right behind the men and women representing the Stars, not only as athletes, but also as game changers behind the scene, helping raise awareness for causes like mental health and sustainability.

“With that, there’s only one thing left to say… Go Stars!”, Britt concluded.

Britt was recently named Runner Up “Managing Director of the Year”, as can be read at iTWire here, with that article linking to a range of other awards Aussie Broadband has won this year, while also linking to a video interview that iTWire conducted with Phil Britt about himself and Aussie Broadband. It’s well worth clicking through to read and watch if you want to know more!

“It’s fantastic news for the club and I’d like to express our thanks to Aussie Broadband for being involved in a landmark year of BBL with the Melbourne Stars,” Cummins said.

“With all the challenges we’ve had this year, one thing that has shone through has been the need to stay connected in whatever way we can – whether that be for family or business reasons. Aussie Broadband continues to put customers first to make that a reality.

“Beyond that, Aussie Broadband’s values strongly align with our own – being awesome not ordinary, thinking big, being good to people and most of all, having fun. Together we’ll be bringing even more opportunities for our fans to connect with each other this season,” Cummins concluded.

The Stars players arrived in camp on Thursday, 10 December, with the club’s KFC BBL campaign due to get underway this Friday night at Manuka Oval in Canberra against the Brisbane Heat.

More information about the new partnership can be found here.