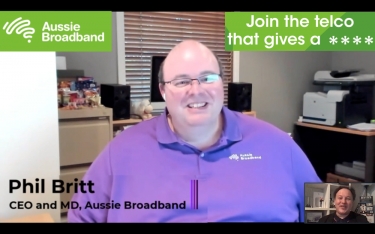 Phil Britt is the CEO and MD of Aussie Broadband, which just listed on the ASX, won a major customer service award, gained its first customer on its new Metro Melbourne fibre network, with Britt also winning the ACOMMS Communications Ambassador Award for 2020, and he joined iTWireTV via Zoom for a good all-round chat.

Phillip Britt. He's the CEO and MD of Aussie Broadband, which he and his team successfully launched on the ASX just a couple of weeks ago in a significantly oversubscribed launch that raised A$40 million.

The company is now the fifth largest provider of NBN services, has over 300,000 residential, small business and enterprise customers, with 100,000 of those customers added in just the last five months.

It is rolling out its over $67 million dark fibre network, with stage one now complete comprising a 20km fibre loop around the Melbourne CBD and Port Melbourne, now open and ready for business, with the first business customer, AI English, already on board.

The new fibre network can offer speeds of up to 10Gbps, which makes Aussie Broadband one of the few very telcos with such an ability.

“Phillip has demonstrated unwavering commitment, above all else, to the interests of his customers and the welfare of his rapidly growing team of employees,

“He is technically savvy, a fierce competitor and sits at the forefront of industry innovation in this country," Stanton concluded.

In 2020, Aussie Broadband offers "a range of services across the residential, small business and enterprise segments, including broadband, VOIP (Voice over Internet Protocol), mobile plans and entertainment bundles through a partnership with Fetch TV", and in 2016, it became "the first ISP outside the big four to build a network to all 121 NBN Points of Interconnect across Australia".

So, it was time to interview telco tech titan building a mighty telecommunications empire in Australia, one that places customer service so highly that it won, earlier this week, the Customer Service Organisation of the Year (Large) at the 2020 Australian Service Excellence Awards (ASEAs), and Britt graciously accepted the invitation to be interviewed, which you can watch in full embedded directly below, after which is a summary of the questions I asked him.

Here's the summary of the topics we discussed:

And that's it! It was a great interview which I'm grateful that Phil took the time to grant me, and I genuinely hope you enjoy watching it and learning from the life, times and experiences of one of Australia's great telco tech titans.

More in this category: « Rising telecommunications sector complaints under scrutiny by NZ competition regulator NBN Co behaving much as Telstra did during its monopoly days: Budde »
Share News tips for the iTWire Journalists? Your tip will be anonymous