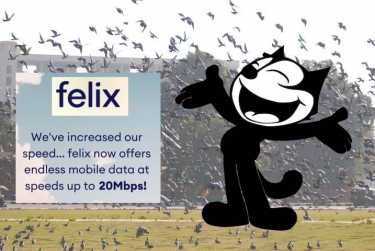 At this Facebook post, Felix mobile says: "We've got BIG news. We've just increased out maximum data speed from up to 5mbps to up to 20Mbps for use within Australia!

"For just $35/month, you can score yourself endless data at speeds up to 20Mbps for use within Australia, including endless standard talk and text. Download the app to switch - https://flx.mobi/e/20Mbps

With speeds up to 20Mbps you can comfortably scroll socials, browse the net and watch HD video. See more: https://flx.mobi/e/speed T&C apply."

I noticed some chatter about it online and saw that Whirlpool forum members were discussing the development in the felix forum, which I was excited to see!

Paul Tierney, the GM of Business Development at felix, said: “We have worked closely with our customers since launching one month ago, and have been overwhelmed with their response to our simple digital customer experience, sustainability focus and endless data proposition.

"Customers have loved the experience of endless data at speeds up to 5Mbps, however we want to constantly challenge ourselves on improving the experience of our customers and give them confidence that everything they need to do will be covered by the felix plan.”

For $35 per month, the felix plan is arguably now better value than Vodafone's $55 plan, which is discounted to $45 per month, giving you 100GB of data at full speed, then capping you to 'up to' 10Mbps speeds thereafter.

For most people, "up to" 20Mbps is plenty of speed, almost double the slowest NBN plans of 12Mbps and nearly as fast as the 25Mbps NBN plans, although again, your speeds can be slowed in peak times on the Felix plan. The felix "fair use" T&Cs are here.

felix adds: "Actual speeds you reach will continually vary depending on many factors such as device capabilities, location, network congestion, network coverage and if you are roaming. Tethering permitted to personal devices only, but must not be used in a modem or as a substitute for a home internet service."

I've been having a debate with Boost Mobile founder Peter Adderton over WHEN Boost Mobile will offer a similar service.

Adderton has rightly claimed that speed caps of the type we see in the US, which effectively bring you down to sub 3G speeds, are terrible options.

At the time, I asked because Vodafone had increased its speed caps to 2Mbps, 10Mbps and 25Mbps, as you can read here.

Adderton has rightly pointed out that Boost, which has the same FULL network coverage that Telstra does, unlike Aldi and other Telstra MVNO resellers which only have the Telstra wholesale network, is a much bigger and better network that Vodafone's, which is what felix uses.

He pointed out in a tweet that he was getting a Boost signal "30 miles" off the coast of Australia, and that people with Vodafone and Optus SIMs in their phones were asking to use his phone.

I can't argue with Adderton on that - he is right, coverage is hugely important. I have friends 30 minutes out of Tamworth, and Vodafone's network drops out 10 minutes before you arrive at their place. Only Telstra, and by extension Boost, is available in the area.

But with the current lockdowns and virus fears, people just aren't travelling huge distances - and given felix, like Boost, is pre-paid, anyone who needs to travel 30 miles off the coast of Australia on a pleasure craft, or needs to travel to the bush, can easily port over to Boost or Telstra and then port back.

Adderton then noted that he was getting 68Mbps and that coverage was very important, which I can't argue with.

Just ran a speed test on my Boost phone on my long life 12 month plan pretty happy with that, and was not avoiding covid was spending time with the in-laws trust me Northern beaches was looking good after a week with the mother in law ??? coverage is way more important. pic.twitter.com/3O0HEu7u3N

Coverage is very, very important, but when you're locked down, what good is coverage? Pre-paid users can switch at will, if they need to go bush they can switch to Boost easily. For people young & old, 20Mbps endless data is MUCH more important than 68.3Mbps. Priorities, Peter:)

Adderton responded about teenage daughters and their speed and coverage needs:

You have 3 teenage daughter's? speed and Coverage is everything we must be doing something right our churn is at an industry low and Boost was the only pre-paid brand that had double digit growth in 2020 and other than Northern beaches no one is in lockdown that I know.

Well, Peter, I don't have three teenage daughters, but if I did have any children, and money was important, especially in these coronavirus challenged times, and they all needed plans that cost around $30 to $50, as most do, then on a personal level, I'd rather they had effectively unlimited 4G data speed capped at up to 20Mbps speeds, rather than 20, 30, 40 or 50GB of data that had a hard limit before more charges needed to be paid.

Most people are at home or at work, where they get a Wi-Fi signal connected to an NBN network, but when people are out and about, or if there's an outage at home, then, for me at least, endless data is more important to me now that a good "up to 20Mbps" speed is the new reality.

I'd imagine that Telstra will have to increase its 1.5Mbps speed capped speeds at some point, and at some point, Boost will offer "peace of mind" data too.

Just as calls and text went unlimited and all carriers and MVNOs provided it, the same will happen with mobile broadband. It's the last limit left, and this too will fall.

Until then, if you need the coverage and speed Boost Mobile or Telstra directly provides, it's there. I have friends and relatives on Boost because Boost offers great coverage and speed, and I'm on Telstra myself with the $65 plan that gives 180GB and I'm very happy.

But I recently signed up to Vodafone's $45 deal month-to-month SIM only plan with 100GB data and up to 10Mbps capped speeds thereafter because it offers 5G, is only $10 more than felix and is itself a great deal, but with felix moving to up to 20Mbps speeds, well, 2020 certainly hasn't been all bad.

Dear readers, which way you go is up to you. I greatly respect Peter Adderton and I wish I was 1/1000th as successful as him. Peter has made Boost a huge brand in the US and continues to be mind-blowingly successful and not only an incredible Australian success story, but a global success story too.

But if you spend the vast majority of your time in the places Vodafone has coverage, I dare say the felix deal will be very tempting - and it will prompt competitive responses from Optus, Telstra and MVNOs too, which is GREAT for competition - and great for consumers. Long live capitalism and the competitive spirit!

More in this category: « Macquarie Telecom expands debt facility to $190 million Telstra and Motorola Solutions to deliver “Advanced Public Safety Communication Network” for Tasmania »
Share News tips for the iTWire Journalists? Your tip will be anonymous