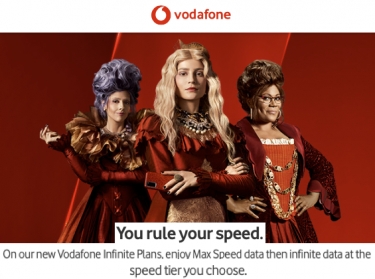 Ever since Vodafone was first to introduce unlimited data capped at 1.5Mbps speeds once the full speed data allocation was used up, followed by Telstra, I've long predicted that a telco would have to increase these capped speeds - and Vodafone is the first to do just that.

Vodafone has introduced three new "infinite data speeds" on its Vodafone Infinite plans, which as the company rightly says, "signals a new era for mobile data in Australia".

Depending on the plan you choose, your new "infinite" data speeds are capped at either 2Mbps, 10Mbps or 25Mbps, of which all three are an improvement over the 1.5Mbps speeds Vodafone offered previously, and Telstra still does.

The new Infinite plans are available on a SIM-only month-to-month basis, or in conjunction with a 12, 24 or 36 month interest free mobile payment plan if you need a new phone as well.

Vodafone has published an excellent "speed guide" that explains in much greater detail that:

You get a further 5 to 20% off plan fees when you bundle eligible plans, and at Vodafone's SIM-only Infinite plans page there's an additional $5 to $20 off the plan prices above for those getting one of these plans as a "new service", making it even more attractive.

This is a great development that I've been expecting for a long, long time, and it goes some way to negating the views of Boost Mobile founder Peter Adderton, who during a 20th Anniversary media event last week, which you can watch in full here, Adderton gave me his views on my specific question about speed caps once full speed data had been used up - it's the very last question that was answered.

Adderton rightly noted that these kind of speed caps were a type of "fake unlimited" because of the dramatic slowdowns, even though he more or less sidestepped my question about whether Boost Mobile would be the first MVNO to increase these 1.5Mbps data caps to at least 2Mbps or 3Mbps.

Also, to be clear, Boost Mobile does NOT offer any kind of speed capped unlimited data, I was trying to cheekily ask whether Boost might ever offer this, with the answer being no and that Adderton wasn't a fan of slow "fake unlimited" speeds, as he much preferred full speed data, which of course we'd all prefer but comes at a natural extra cost for however much you use.

A week later though and Vodafone has done just that, and while I'm not aware of every single telco and their plans on a global basis, this is the first time I've heard of a telco actively increasing its speed caps in this scenario anywhere in the world.

In addition, I personally dispute the notion that it is fake unlimited because my sister is on a Telstra $15 per month data SIM, with 5GB of full speed data which is used in the first couple of days of the month, and then she's on 1.5Mbps thereafter.

I discovered Telstra's Click Frenzy deal last November which my sister singed up to, and it gave her 12 months of the plan for just $5 per month! She uses 1.5Mbps to effortlessly work from home, make and receive VOIP calls on a work number and USB headset, watch Netflix, YouTube and more at sharper than regular SD and - she's happy!

I've helped several friends who wanted this kind of unlimited data plan, and sure, there are times Netflix goes a bit low res, but it fixes itself quickly and off you go.

Having slightly faster or much faster speed caps would improve things further - and when you start talking about 10Mbps and 20Mbps speeds - the whole "fake unlimited" claim no longer holds water.

What does Vodafone have to say?

Arthur Panos, General Manager of Product and Devices said Vodafone Infinite plans offer a tailored solution to keep customers connected in a way that suits them.

He added: “Vodafone changed the game in 2018 when we were the first Australian telco to offer a range of endless data plans and eliminating excess data charges in Australia for customers who took up one of these plans. Now we’re leading the market once again and taking that concept to a whole new level with the introduction of Vodafone Infinite plans.

“We are moving beyond the simple data allowance concept and giving our customers a usage experience that suits their needs and delivers peace of mind that they can stay connected in a way that works for them even if they happen to go over their Max Speed data.”

Vodafone tells us this is the next step in its evolution, aligning with its "recently launched You Rule campaign, which highlights the company’s ongoing commitment to put customers at the heart of everything it does and deliver more value and choice for Australian consumers."

“Whether it’s doing a virtual meeting on the run, firing off emails at lunch or catching up with loved ones over video chat, we’re excited to give customers new infinite data options and more choice when it comes to their mobile plan,” Panos concluded.

So, your move, Telstra and Optus. And when will Boost Mobile, Amaysim, Kogan Mobile and all the others step up to match speed capped unlimited data, too?

Amaysim offered unlimited data for a while, but the deal expired long ago with new customers unable to get it, so we'll just have to wait and see, but Vodafone has thrown down the gauntlet, and I'm very, very, very happy to see it.

On Vodafone's Speed Guide page, we read the following:

"Vodafone Infinite Plans are intended to be used with your personal mobile phone. You are permitted to tether other personal devices, such as your laptop or tablet, to your mobile phone by creating a mobile hotspot from your phone via Wi-Fi.

"However these plans must not be used to provide tethering to other people's devices (for example the devices of members of your household, colleagues or friends), nor used as a substitute for a home internet service or in a modem. Consider our Vodafone nbn™ or Home Wireless plans (subject to availability at your address) if you are looking for home internet options."

"Heavy data users may experience slower speeds than other users during busy periods. This means in periods of congestion or peak periods, a heavy data user may receive lower priority on our Network. This may result in reduced speeds compared to other users."