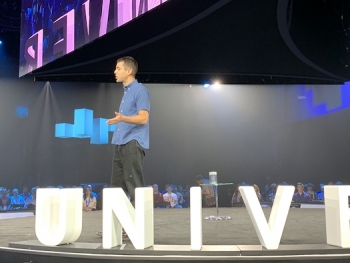 Software developers have a responsibility to collaborate and build the future together, and open source thinking is the way to achieve it, says GitHub’s chief strategy officer Julio Avalos.

Taking the stage at GitHub Universe in San Francisco on Wednesday, Avalos said, “Improving software and making it more successful and collaborative brings people together and improves the quality of life.”

Developers were propelling the world to digital revolutions, Avalos explained, with software now driving not just computers, but ways of communicating, cars, home appliances, even attire.

This was enabled through the collaboration and opportunities to build upon other people’s work, enabled by open source software, and facilitated by a site such as GitHub with more than 96 million repositories and 31 million users worldwide.

However, Avalos states, it’s not simply about the coding; this same mentality must be applied to other areas.

GitHub, he said, took its responsibility as a centre of gravity in the modern developer universe seriously and had sought to apply developer-centric thinking to the company’s own structure and behaviours. “Taking queues from the way developers work and think has always meant more at GitHub than an organisation chart,” he said.

“In this modern world, there is increasing discontent with, and greater scrutiny applied to, Internet and technology companies and practices, especially of the way our data — our digital life — is handled and controlled,” Avalos said.

“The technology industry is often and properly criticised for being overly infatuated with its own marketing slogans and ‘innovation’ even when they come at the expense of the humans impacted by it.

“GitHub is a developer company, not just because we make tools but because everything we do is inspired by how developers work,” he said. “Our measure of success is if technology serves the public good rather than a private few and if it advances humanity rather than inhibits it.”

According to Avalos, the technology world has inherited many false paradigms from the 20th century, with companies  and individuals “forced to choose between business and open source, private or public, profit or non-profit, successful business or positive impact".

This change necessitates the same workflows and principles that govern open source communities being adopted by businesses, he said.

It’s not simply a matter of ingesting open source libraries and code, but a matter of the values embedded into teams and companies.

Day after day, programmers within companies are solving engineering challenges that have been solved elsewhere, earlier, by others.

“Companies are waking up, not just building the same mouse trap over and over, but rediscovering the very existence of mice,” he said. “It doesn’t make any sense. The problems of scale and complexity users face and suffer for with the latest privacy and security breaches, all of these are functions of an irrelevant way of working.

“We need to share with one another the ways that open source projects and communities pioneered decades ago.”

To illustrate, Avalos pointed to GitHub’s load balancer project, octoDNS. GitHub isn’t in the load balancing business but, after suffering DDoS attacks, it built its own technology to mitigate such attacks and open sourced its code with the principle that a lot of other companies could benefit from it. “The world shouldn’t have to face [DDoS attacks] again.”

Or, aside from code, Avalos pointed to GitHub’s “balanced employee IP agreement” as a contractual problem that is faced by companies every day, with money similarly going to lawyers to resolve the same problem. Instead, GitHub says it’s solved the issue and contributed it so everyone can benefit.

“Open source methodologies allow businesses to focus on their unique value proposition without having to reinvent mousetraps,” Avalos said.

“From day one GitHub committed to openness and the belief open platforms drive innovation and create choice and opportunity for developers.”

“All of us together have a responsibility to build and collaborate to produce the future.”

The writer is attending GitHub Universe 2018 as a guest of the company.

More in this category: « New wave of Mirai botnet surfaces, leveraging Linux to target IoT Want to make the world a better place? Fund open source developers. »
Share News tips for the iTWire Journalists? Your tip will be anonymous