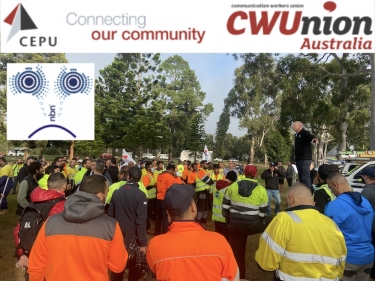 With the Communications Workers Union (CWU) calling for a National Senate Inquiry into what it calls the "shambolic NBN network", over 100 subcontractors arrived outside the NBN Co North Sydney office to "protest against the NBN Co's shambolic management and pyramid contracting scheme that's leaving workers struggling to make ends meet."

The CWU has reported "hundreds of technicians working on the NBN project around the country have this morning decided to walk off the job over cuts to their pay rates, a debacle causing chaos in job bookings and scheduling, pyramid sham contracting arrangements and overall poor treatment.

"Over 100 subcontractors who met in Sydney this morning are currently outside the NBN Co North Sydney office as part of a convoy to protest against the NBN Co’s shambolic management and pyramid contracting scheme that’s leaving workers struggling to make ends meet.

"CEPU National President Shane Murphy is calling on the Minister for Communications, Minister Paul Fletcher, to announce a Senate Inquiry into the NBN rollout and the issues that are plaguing it."

CEPU National President Shane Murphy says “The mismanagement of Australia’s NBN network continues to be left unaddressed and workers have had enough.

“The time has come - we need Minister Fletcher to urgently announce a national inquiry into the NBN so we get can these issues fixed.

“The NBN rollout has been plagued with issues from day one, and workers won’t put up with it any longer. NBN Co needs to scrap their dodgy pyramid contracting model, improve pay rates and ditch the shonky booking app.

“Subcontractors are being forced to sign new contracts with NBN Co Delivery partners which cuts their pay, all whilst NBN executives paid themselves $77m in bonuses during the pandemic. It’s infuriating.

“These NBN Co subcontractors have continued to keep the country’s internet services connected during the covid-19 pandemic, turning up for work day in, day out. They deserve better from NBN Co.

“These technicians are highly skilled workers – yet because of the NBN’s ‘pyramid style’ sham contracting scheme, it’s the executives and middle-men who are profiting from Australia’s NBN while the people doing the work are getting get ripped off and consumers continue to suffer with substandard connections."

The CWU notes the NBN has been "plagued by ongoing issues, with technicians the latest to feel the effects with pay cuts and a work dispatch system that is taking subbies up to 3 hours to book work off – threatening to send their small business to the wall, whilst leaving customers waiting for technicians to turn up to their next job."

Murphy continued: “Subcontractors are fed up with cuts to their pay and a shambolic booking system which is leaving subcontractors and NBN customers high and dry.

More in this category: « Telstra launches $200 million fund to improve regional coverage over next four years Aussie Broadband’s new mobile offering, with 5G, much more data and 2 months free »
Share News tips for the iTWire Journalists? Your tip will be anonymous