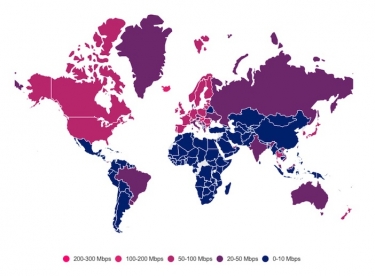 Analysis of over 1.1 billion broadband speed tests worldwide has revealed where almost every country, territory and region sits in terms of its internet speeds.

The research was designed and compiled by Cable.co.uk, and the data gathered by M-Lab, an open source project with contributors from civil society organisations, educational institutions, and private sector companies.

Downloading an HD movie of 5GB in size would take 2m 29s at the average speed experienced in table-topper Jersey, while it would take 22h 34m in last-placed Turkmenistan.

In Australia the average person would take 16m 51s to download the 5GB HD movie, as revealed by Cable.co.uk's interactive map. Australia ranks 55 in the world according to the results with an average speed of 40.50Mbps. In New Zealand, the same 5GB movie would take only 7m 57s to download, as they have more than double the average speed of Australia at 85.95Mbps and ranks 20th in the world.

Cable.co.uk says that 34 of the top 50 fastest-performing countries are located in Europe (Eastern, Western and Baltics), with seven in Asia (Ex. Near East), three in the Caribbean region, four in Northern America, one in Sub-Saharan Africa and one in Oceania. By contrast, 31 of the 50 slowest-performing countries are located in Sub-Saharan or Northern Africa, six are in Asia (Ex. Near East), four are in the Near East, two are in the CIS (Former USSR) region, five are in Oceania, and one each in South America and the Caribbean region.

94 countries failed to achieve average speeds of 10Mbps or greater, the speed deemed by UK telecoms watchdog Ofcom to be the minimum required to cope with the needs of a typical family or small business. This is down from 109 countries in 2020, indicating significant speed improvements in many parts of the world, Cable.co.uk says.

Commenting on the worldwide rankings, Cable.co.uk consumer telecoms analyst Dan Howdle said, "The acceleration of the fastest countries in the world has finally plateaued this year as they reach FTTP pure fibre saturation. Increases in speed among the elite performers, then, can be attributed in greater part to uptake in many cases than to network upgrades.

"Meanwhile, though the countries occupying the bottom end of the table still suffer from extremely poor speeds, 2021's figures do indicate that the situation is improving.

"Europe absolutely dominates the leaderboard once again thanks to largely excellent infrastructure. In all cases, those countries ranking highest are those with a strong focus on pure fibre (FTTP) networks, with those countries dawdling too much on FTTC and ADSL solutions slipping further down year-on-year."

Seems that NZ made the right decision on broadband and Australia is playing catchup needing to spend more capital replacing the relatively recently deplyed FTTN with FTTP.

This first appeared in the subscription newsletter CommsWire on 14 September 2021.

More in this category: « iiNet backs Sydney Sixers in BBL and WBBL for 2021/22 season Former Vocus Chair charged with insider trading »
Share News tips for the iTWire Journalists? Your tip will be anonymous