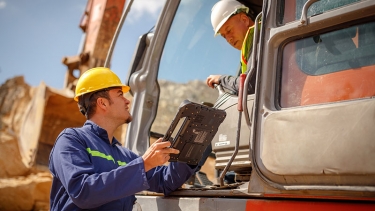 The market for ruggedised tablets and laptops is growing. Analyst group Technavio predicts an annual growth rate of almost 8% over the next few years, much more than the regular PCs.

Ruggedised devices are, as the name suggests, tougher than normal, designed for outdoor and mobile users who increasingly need some computing power on their jobs.

For the last week or so I’ve been playing with a couple of new ruggedised lablets from Zebra Technologies, two versions of its L10 Android machines. They can be used as tablets or laptop PCs. They have an easily detachable, and of course rugged, keyboard. Windows versions are also available.

How rugged are they? Zebra says these things can be dropped 1.8 metres without damaging them, or 1.2 metres onto concrete. I was reluctant to test these claims, but Zebra said I should, so I did. They made a real thud, and I certainly wouldn’t want to do it to a normal machine. But they still work fine.

That’s why they call them rugged. The term has been abused quite a bit recently. I’ve seen ordinary laptops from some of the major vendors referred to as ‘rugged’ when they clearly are not. Some of them are even referred to as ‘semi-rugged’ or ‘business rugged’, which is really having it both ways. What does ‘business rugged’ really mean anyway? Maybe you can spill a cup of coffee on the keyboard, or drop it from your lap onto a boardroom floor.

You only have to look at these Zebra machines to see that they are, in fact, rugged. Very rugged indeed. These machines are built for the factory floor and the great outdoors. They’re for people in mining and construction, or mobile workers who need to carry a machine around with them all day, or at least use it pretty often, in environments unfriendly to electronic equipment.

That means they have to put up with a fair bit of wear and tear. They will get banged around a bit. They need to be waterproof, shockproof and idiot-proof. I used to tell people who were new to computers and who were scared of using them, “Go ahead, you can’t break anything,” always worried that they actually would. You could say that to a new L10 user with complete confidence.

The gold standard for ruggedised equipment is MIL-STD 810G, a US military standard that covers mostly environmental conditions. It is intended to cover a range of equipment, not just electronic devices, but it is a useful guide to the sort of treatment a complying device can be subjected to.

It covers altitude, temperature, humidity and immersion, sand and dust, shock (including shock from gunfire ballistics, vibration and a range of other nasty things. They can operate at temperatures between 20° below zero and 60°. Zebra actually tests its devices to these standards, unlike some vendors who merely say they ‘comply’.

There is also another relevant standard, IEC 60529 which is an ‘Ingress Protection’ code. The L10 is rated IP65, which is the highest level of dust protection and protected against water projected from a nozzle. That means they’re fine in rain and snow. 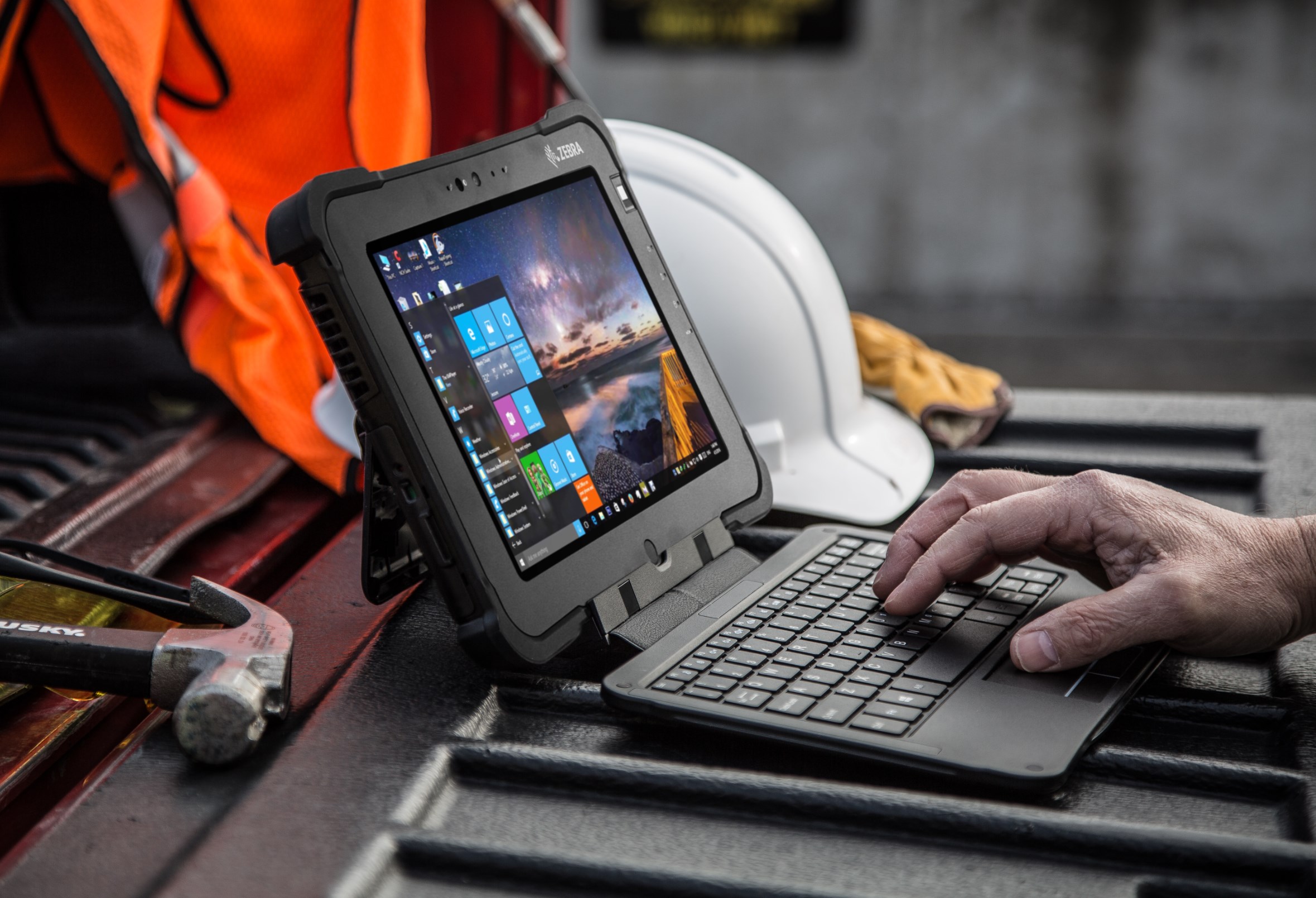 I can see why the Android models are more popular. Most people are already familiar with it on their personal devices, so there’s no learning curve on how to operate the Zebra machines. The sorts of applications ruggedised users are likely to use revolve around data collection and recording. Not too many people are going to want to do Excel pivot tables or format a marketing plan halfway down a coal mine. Keep it quick, keep it simple.

The Android machines use the 8.1 Oreo version of the operating system, with Zebra’s Restricted Mode for control over GMS (Google Mobile Services) and other networks. The Windows models offer a choice of high-end Intel processors, while the Android machines all use Qualcomm’s Snapdragon 660 octa-core 2.2 GHz processor. They all have long battery life and a range of storage options.

The Windows machines are fully configured PCs, just kind of, well, rugged. Even the Android machines, with their detachable keyboard and neat styluses (styli?) will run the full suite of Google Docs applications, or other web-based programs. The stylus is attached with a handy lanyard, by the way.

There are three Android and three Windows models in the L10 range: the XSlate, XPad and XBook. The XSlate (1.2 kg) is a tablet that still has the ability to add a keyboard, the XPad (1.4 kg) is a tablet that has a rigid handle and comes with a built-in barcode reader, and the XBook (2.0 kg) is more of a laptop. They are all guaranteed for three years.

They all come with a long list of accessories – a whole range of cradles and shockproof vehicle docks, battery packs that give up to 27 hours of use, a serial port (a lot of industrial equipment still uses the RS232 standard), RFID readers, carrying cases, and the like. All models have built-in cameras front and back.

Overall, I’m pretty impressed. I love gadgets. I’d love one of these, just to say I had it.

For someone who needs a device they can use with confidence on the run and in machine unfriendly environments, you can’t go past these things. And they really look the part – all chunky and knobbly and quite attractive in a he-man sort of way. They have a definite ‘don’t mess with me’ look about them.

There are so many options and so many accessories that it is hard to list definitive pricing. It says to get in touch with its local office or a partner.

You may not have heard of Zebra, or if you might think they’re some new contestant in the rugged sector. Not so. They are a big US public company listed on NASDAQ, based in Chicago and with annual revenues of over US$4 billion.

Zebra has been around since 1969, making printers and barcode readers and the like. In recent years it has grown substantially through acquisition. Its biggest deal was the 2014 acquisition of Motorola’s Enterprise division, which expanded Zebra’s product line into mobile computing and a range of communications technologies and services.

Then in 2018 it acquired Xplore, a manufacturer of ruggedised tablets based in Austin, Texas. That’s where the technology to build the L10 came from. Zebra now has a massive product range covering everything that has to do with information collection and distribution across the mobile, supply chain and retail sectors. Ruggedised tablets are a natural fit for the company.

Zebra says it is targeting people like fieldworkers, drivers, warehouse managers, technicians, paramedics and the like. It is marketing to the enterprise rather than individuals, which is very much the company tradition. The acquisition of Motorola’s Enterprise division meant that it increased its customer base substantially, into organisations like emergency services bodies and mining companies.

Most of its competitors have come out of the personal computer market. Zebra’s emphasis on enterprise computing means it doesn’t have the profile of the big PC manufacturers, but outpoints them in in the recognition factor in its target markets.

I’m not personally in need of a ruggedised computer, though they’re lots of fun to play with. The harshest environment I encounter is on Sydney suburban train network, which I admit can get pretty hairy at times. But I strapped one to my arm and ventured out into the wilds of suburbia to see how practical they are.

You can’t buy these things at JB Hi-Fi or Harvey Norman. Zebra has its own enterprise sales team, but if you as an individual want to get one for whatever reason, you can go to a specialist reseller like Ingram Micro or Sektor.