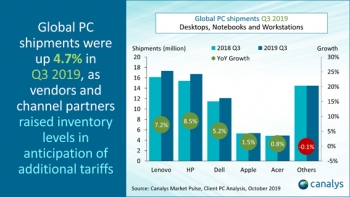 The global PC market, inclusive of desktops, notebooks and workstations, grew 4.7% in the third quarter of this year to 79.9 million units, recording the best growth performance since the first quarter, according to a new analyst report.

Lenovo and HP placed first and second, with what analyst firm Canalys’ describes as “impressive performances”, particularly in Japan and the United States.

Third-placed Dell also grew in line with the market at 5.2% and shipped 12.1 million PCs in the quarter, with Apple and Acer rounded out the top five, taking fourth and fifth places respectively, and also growing shipments - albeit by 1.5% and 0.8%. Canalys, however, warns that this is a short-term boost, effects of which could wear off as early as Q1 2020.

Canalys says multiple factors continued to contribute to demand in PC sales, including upgrades to Windows 10, and seasonal inventory stocking for the holidays, but the market was given further impetus by macroeconomic conditions.

“In volatile regions, PC vendors and channels were forced to take precautionary measures to hedge against future disruption. In the US, for example, another round of tariffs is scheduled to take effect on US$37 billion worth of Chinese made notebooks and tablets,” Canalys notes in its report.

“As a result, leading PC vendors are pumping up production orders, and channel partners are building inventory ahead of the 15 December deadline. This impact will not last forever, but in the short term it has benefitted the PC supply chain, which saw a positive performance that is likely to extend into Q4.”

“The PC market high is refreshing. However, there is a limit to how quickly leading vendors can ramp production,” said Rushabh Doshi, Research Director of Canalys’ Mobility services.

“Intel remains a key bottleneck, with pressure on its 14nm CPU supply not likely to see improvement until Q1 2020. However, the Intel CPU shortage provided leading PC vendors an advantage over smaller rivals drove HP and Lenovo to their best Q3 performance to-date.

“Going forward, leading vendors will have an opportunity to further consolidate the market and squeeze smaller vendors’ market share, if the Intel supply is not able to satisfy the spike in orders.”

Canalys also reports that the top five vendors consolidated their market share to 79.6% of the total PC market in Q3 2019, with market leaders HP and Lenovo taking a lion’s share of 48% together.

“Japan continued to be a stand-out growth market, with businesses complying with deadlines for the end of Windows 7 extended support, and more importantly, a ramping up of IT infrastructure spend ahead of the Tokyo Olympics in 2020, driving up demand for PCs. Additionally, Japan is set to increase its consumption tax from 8% to 10% in October 2019, which is accelerating refresh timelines across the country, driving up sell-in,” says Canalys.

“The top three vendors increased market share, with Lenovo, HP and Dell posting excellent growths of 61%, 83% and 104% year-on-year respectively, achieving personal bests for all three vendors in Japan. Total desktop, workstation and notebook shipments in Q3 2019 were 4.5 million versus 2.7 million a year ago, an enviable growth of 63% over last year.

“PC shipments in the United States in Q3 benefitted from tail-end back-to-school season demand and front loading of shipments into the channel ahead of expected disruption from tariffs in the crucial holiday spending period from November to January.

“Shipments were up 3.0% year-on-year, with Apple and HP growing faster than the market average. HP continued to see a healthy sell-in of Chromebooks, with shipments over the million mark.”

Canalys says that in Europe, uncertainty over Brexit and its outcome restrained demand for PCs, as businesses are “apprehensive about investments for the long-term”.