Big Sur: a big step forward or a big yawn? 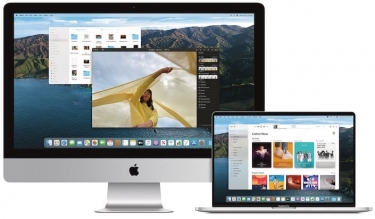 If Apple didn't release a new version of macOS each year, you'd probably think of Big Sur as just an update rather than a significantly new version.

Arguably the most important aspect of macOS Big Sur is that it paves the way for the introduction of new ARM-based Macs.

Using Xcode 12, "most developers will be able to get their apps running [on ARM] in a matter of days."

Migrating the Mac from one type of processor to another is familiar territory for Apple. Just as it provided a mechanism for the delivery of applications with both 68000 and PowerPC code in the mid-90s, the Universal 2 application binary format enables a single app to support Intel and ARM processors.

"Developers can also make their iOS and iPadOS apps available on the Mac without any modifications," Apple added.

iPad apps ported to the Mac with the aid of Catalyst automatically inherits Big Sur's new look (more on which later).

It's not really part of the operating system, but the Safari browser update coming with Big Sur is a big deal.

Apple claims "the world’s fastest browser is even faster, providing industry-leading speed and battery life", and that it loads frequently visited sites an average of 50% faster than Chrome.

Privacy is important, and the new Privacy Report helps show what Safari is doing to help protect you. The idea of being able to choose when and which websites a Safari extension can work with is valuable (eg, you might choose to disable all extensions for important sites such as internet banking), and data breach password monitoring helps alert you to situations where one of your online identities is at risk.

Being able to translate pages between languages without relying on an external service is an attractive idea, especially for the privacy-minded. The new Safari can detect and translate webpages between English, Spanish, Chinese, French, German, Russian, and Brazilian Portuguese.

The value of Safari's UI changes are more subjective, and we'll find out how much difference they really make over the coming months. The redesign allows more tabs to be shown (good), favicons are displayed by default (why that change was so long coming is a mystery), and I like the idea of being able to hover over a tab to get a preview of the page. Those of us who like new browser windows to open as a complete blank won't be impressed by the new customisable start page, but it may make life easier for others. But do we really need or want to select a background image for it?

The Mac App Store is to provide privacy information labels showing the types of data (eg, usage, contact information, or location) an app might collect, whether that data is shared with third parties for tracking. Forewarned is forearmed.

The "Completely redesigned" Maps application sounds promising with guides to places drawn from "trusted resources", detailed indoor maps of major airports and shopping centres, and routes for cyclists and drivers of electric vehicle. The question is how well Australia is served with this additional information.

Apple may well talk about the "Biggest Design Upgrade Since the Introduction of Mac OS X" but at this stage it is questionable whether it's an upgrade or just change for change's sake.

The "new uniform shape for app icons" just makes icons less distinct from each other, and "Icons in the Dock have been thoughtfully designed to be more consistent with icons across the Apple ecosystem" is presumably code for "yes, the iOSification of macOS continues."

It seems Apple is continuing to drift away from the idea that functions should be readily discoverable (one of the things that contributed to the Mac's original success was the way you could roll the mouse over the menu bar to reveal all the commands and their keyboard shortcuts) and towards the 'hide and seek' interface where you have to know that a visual element is a control (otherwise you wouldn't think to use it) or completely hidden (eg, scroll bars that are hidden until you activate them). Or as Apple puts it, "Buttons and controls appear when needed, and recede when they’re not."

Forgive me if I don't get excited that "Everything from the curvature of window corners to the palette of colours and materials has been refined" and that I remain sceptical that "Big Sur delivers a spacious new design that makes navigation easier, while putting more controls at users’ fingertips."

As for the Control Center, I'm not sure that it's a big improvement on menu bar icons except for people like me who have overloaded their menu bar to the extent that many of the icons become hidden when using apps with more than seven or eight menus. And, of course, it makes macOS more like iOS.

Messages users may welcome new features such as the ability to pin conversations to the top of the list, improved search, and customisable Memoji, but it still has the fundamental limitation of being an Apple-only messaging platform (unless you count SMS via Continuity, but then some of us still believe mixing SMS and chat in one app was a mistake from the outset). If your circles include Windows and Android users, it doesn't matter how good Apple makes Messages – it's useless until cross-platform versions arrive.

There were rumours that what we now know as Big Sur would be compatible with all Macs capable of running Catalina, but that is not the case.

The developer beta of macOS Big Sur is available to Apple Developer Program members immediately, with a public beta to follow next month.

macOS Big Sur will be available this spring as a free software update.