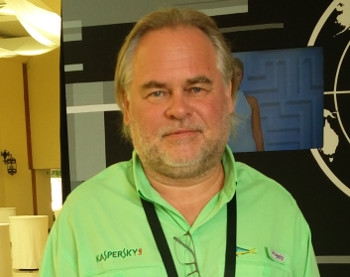 Twitter has banned advertising from Russian security vendor Kaspersky Lab since January, the head of the firm, Eugene Kaspersky, has disclosed.

In an open letter to Twitter chief Jack Dorsey and the company's senior management, the Kaspersky Lab founder and chief executive said Twitter had unexpectedly informed the company of an advertising ban on its official accounts using which it announces new posts on cyber security.

Eugene (below, right) quoted the Twitter communication as saying: "At Twitter we believe in freedom of expression and in speaking truth to power. We also want to ensure that people feel safe when they interact with our site, and that advertisers bring value to our users.

"Accordingly, Twitter has made the policy decision to off-board advertising from all accounts owned by Kaspersky Lab. This decision is based on our determination that Kaspersky Lab operates using a business model that inherently conflicts with acceptable Twitter Ads business practices. Kaspersky Lab may remain an organic user on our platform, in accordance with the Twitter Rules."

Questioning the bit about his company's business model, Eugene said that it was the same as every other company that operated in the cyber security space. 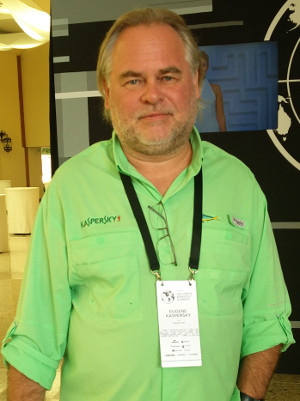 He pointed out that the content posted on Twitter by the company "brings value to a variety of Twitter users, including regular folks who want to read simple tips on how to protect themselves and their families against cyber threats as well as infosecurity experts who are interested in the technical details of our latest research".

And, he added, "Twitter is playing into the hands of cyber criminals when it hinders us providing users, for example, with timely, potentially important information on protection from cyber-extortionists (case in point: our top promoted tweet was one on the worldwide WannaCry ransomware attack)."

After having written to Twitter in February, Eugene said the only response had been a copy of the same boilerplate text: "We continue to abide by our determination that Kaspersky Lab operates using a business model that inherently conflicts with acceptable Twitter Ads business practices. For this reason, all accounts operated by Kaspersky Lab remain ineligible to promote content on our platform. While these accounts are ineligible to place ads, they can continue to remain organically on Twitter as long as they comply with our Terms of Service and Twitter Rules."

Given that more than two months had passed since then, Eugene said he had decided to "publicly ask that you, dear Twitter executives, kindly be specific as to the reasoning behind this ban; fully explain the decision to switch off our advertising capability, and to reveal what other cyber security companies need to do in order to avoid similar situations. What’s more – within a reasonable timeframe please."

Twitter has not issued any public statement about why it has banned Kaspersky Lab from advertising. However, in statements to a number of other media organisations, it pointed to a directive from the US Department of Homeland Security that banned public sector agencies from using Kaspersky's products.

In particular, Twitter cited this passage from the DHS directive: "The Department is concerned about the ties between certain Kaspersky officials and Russian intelligence and other government agencies, and requirements under Russian law that allow Russian intelligence agencies to request or compel assistance from Kaspersky and to intercept communications transiting Russian networks. The risk that the Russian government, whether acting on its own or in collaboration with Kaspersky, could capitalise on access provided by Kaspersky products to compromise federal information and information systems directly implicates US national security."

The US ban came in the wake of allegations that Russia interfered in the 2016 US presidential elections. US retailers Best Buy and Office Depot took Kaspersky products off its shelves last year.

Also last year, there were a number of mainstream media reports claiming that Kaspersky was involved in spying activity.

A report in The Wall Street Journal on 11 October hinted that Kaspersky Lab could have made available its source code to the Russian Government. The same paper kicked off 2018 with a long piece detailing all the claims made in the past.

Prior to that, a report in the Washington Post on 10 October claimed that Israeli Government information security professionals had found NSA hacking tools in Kaspersky Lab's system when it gained access to the company's servers in 2014.

More in this category: « RSA Conference can't secure its attendees' details UK teen first under 18 to get jail term for hacking »
Share News tips for the iTWire Journalists? Your tip will be anonymous