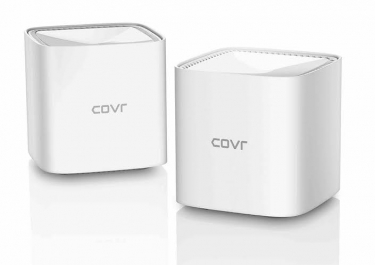 Finally, a Wi-Fi mesh system that lives up to its promise.

I've tried out a few mesh routers, but they they haven't lived up to the promise of seamless coverage throughout my home.

Part of the problem appeared to be that a device would maintain a connection to one node even if another presented a stronger signal. Also. each node seemed to have a shorter useful range than the D-Link Cobra modem/router that provides decent coverage to all rooms in the house.

The basic two-node system delivered internet speeds throughout the house that were at least as good as the Cobra, which in turn outperforms every other Wi-Fi router I've tried. In some areas, the speed was significantly improved, even though I didn't try to optimise the nodes' locations. Black Magic's Disk Speed Test clocked transfers between two computers in the same room as the first Covr-1102 at around 240Mbps, which is respectable even though an Ethernet connection was more than three times faster.

But back to basics.

The Covr-1102 nodes are 9cm cubes, with relatively minimalist styling. A small, gloss white box is a fairly unobtrusive addition to a room, but you're supposed to place the nodes so they face each other, and that may mean putting the back panel (with its switch, connectors and cables) on display. A fixed base with a swivelling top — a bit like a Rubik's cube — might have made it possible to point the antennas in the right direction while keeping the connectors out of sight. But more on that later.

Maybe it's just my decor, but the design would be even more unobtrusive if the mains adaptor and its permanently attached low-voltage cable were also white rather than the usual black. A good thing about the adaptor is that it is no wider than a standard plug, so it doesn't block adjacent mains sockets. If only that were true of all wall warts...

Installation and setup is quite straightforward, but there is a trap that I'm almost ashamed to admit falling into.

Anyway, once the connections are correctly made, the D-Link Wi-Fi mobile app made setting up the first node a doddle, especially as the Covr-1102 is pre-programmed with settings for a wide range of RSPs.

Adding the second node to the network is even easier, and then it can be moved to a suitable location to extend the coverage. That's largely a matter of trial and error – you need to find a spot that's close enough to the first node to get a sufficiently strong signal, yet close enough to the area with poor coverage.

I picked what seemed to be the most obvious locations, and the effective internet speed in the most challenging part of the house went from 29/12Mbps (on an NBN50 plan) to 46/18Mbps. As I mentioned in the introduction, the Covr-1102 delivered the same or better speed than the Cobra in every location I tested – yes, devices really did roam between the two nodes just as they are supposed to.

In practice, there will likely be just a few possible places to locate the nodes, because the first must be connected to the modem via an Ethernet cable, and a mains socket is required within about 1m of each node unless you're prepared to run an extension cable. The indicator LED on the top of the second and subsequent nodes flashes white if the signal is inadequate, but it would be useful if the app incorporated a signal strength mapping function to help optimise the position of the second and subsequent nodes.

Despite D-Link's warning, it didn't seem to make any significant difference which way the second node was facing. If the LED indicated a good signal, turning the node around didn't make it start flashing.

It's possible to configure and manage the Covr-1102 via its built-in web server, but I found the mobile app generally more convenient. However, several of the more advanced functions are only accessible via the web interface. These include QoS (like other recent D-Link routers, one device can be given highest priority, two can get high priority, and eight medium), firewall, port forwarding, virtual server, and website filtering.

The website filter is supposed to allow up to 24 sites to be be blacklisted or whitelisted, but there's a big catch not mentioned in the manual: it doesn't work with HTTPS, making it practically useless in this 'HTTPS Everywhere' era.

There's also provision for automatically rebooting the router on a daily or weekly schedule – I have previously used routers that benefited from such a process, but during an extended test period the Covr-1102 chugged along happily without it.

IP addresses can be reserved for particular devices, which is often more convenient than assigning static IP addresses.

Among the app-accessible features are limiting Wi-Fi operation to certain times of day, switching from router mode to bridge mode (a factory reset seems to be the only way to get back to router mode), and checking for new versions of the firmware. The latter would normally be done automatically, and you can specify the time that such updates occur.

Some people will appreciate the Covr-1102's integration with Google Assistant and Amazon Alexa, but that's not my cup of tea.

EasyMesh certification means the Covr-1102 can be used with similarly-certified mesh devices from other manufacturers.

It's not unusual for homes to rely on Wi-Fi for networking, with the only Ethernet cable being the one between the modem and the router. But there is something to be said for using Ethernet – where convenient – to connect fixed devices such as smart TVs, set-top boxes, desktop computers, NAS units, and printers.

But each Covr-1102 has just one LAN port, so if you want to connect more than one device via cable you'll have to add an Ethernet switch, which would spoil that neat appearance. That's not necessarily a problem with entertainment gear – I've hidden a small switch behind my Blu-ray player so that one port on the router can feed the Blu-ray and three other devices, and I know other people with similar arrangements.

If you can't get good Wi-Fi coverage around your house with a simple router and the shortage of Ethernet ports isn't an issue, the Covr-1102 is a well performing and attractively priced candidate.