Job ads up as ICT industry gets February boost Featured 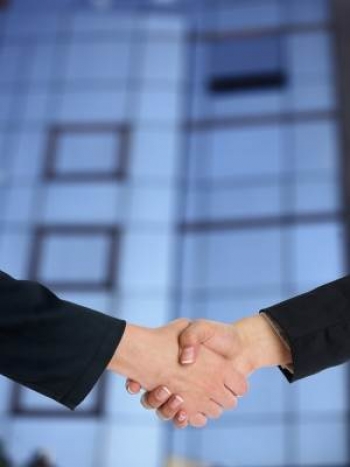 Image courtesy of adamr at FreeDigitalPhotos.net

The Information & Communication Technology sector has been one of Australia’s strongest performing industry sectors for year on year jobs growth, according to a new report which showed an increase of 26% in the number of ICT job ads for February compared to 2017.

The February jobs ads report from recruitment firm Seek shows an increase in new job ads of 16.2% across all business and industry sectors, compared to this time last year, driven largely by mining, agriculture and engineering.

February also saw a 2% increase in job ads month on month as businesses begin to ramp up planned hiring activity in the new year.

Kendra Banks, managing director, Seek ANZ, points to a number of key drivers, including unprecedented levels of government investment in infrastructure and noted that across Australia this is the ninth consecutive month of year on year double digit growth in Seek new job ads. 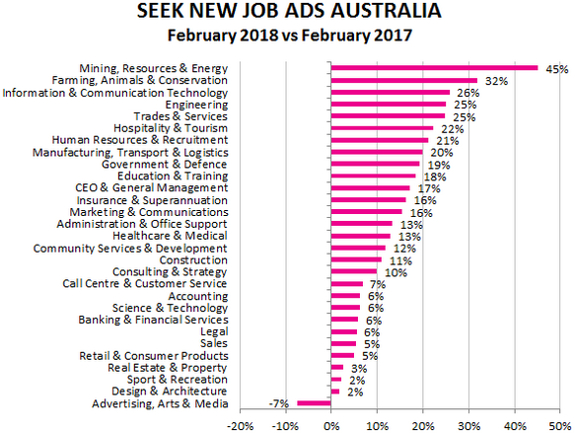 Banks cites a recent ABS report showing that the value of work yet to be done in the pipeline of public sector infrastructure projects is at a record high, and this is likely driving the increase in jobs in both Engineering (25% YoY) and Trades and Services (25% YoY).

“There are a number of key infrastructure projects underway across Australia, including the Perth-to-Forrestfield Airport Rail Link. We are seeing particularly strong demand for engineering skills in Western Australia, and job ads in this sector have increased 63% this month. Job growth in this sector is expected to continue.”

The Seek report reveals that Farming, Animal & Conservation has also been a key area of job growth in February, with job ads up 32% compared to this time last year. And, while actual job numbers are still relatively low (a few hundred), Seek says this increase is significant for an industry facing a number of challenges.

“The increase in job ads across Victoria (40%), NSW (50%) and WA (54%) reflects solid growth in some sectors including sheep and wool, grain and cattle. Australian farmers are getting older, with the latest survey data from the ABS finding the average farmer is 56-years-old. As such it is not surprising that certain jobs are increasingly being outsourced due to both an aging workforce, and to improve efficiency.” 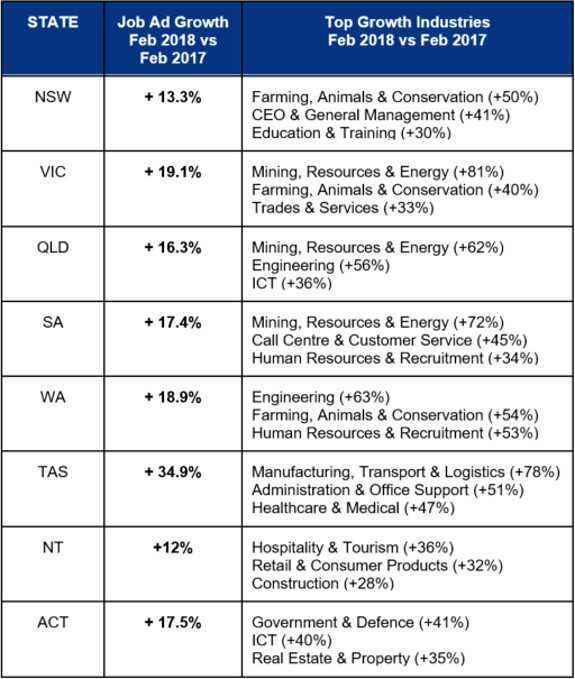 The only sector that saw a decrease in job ads in February was Advertising, Arts & Media with a drop of 7% YoY.

Across the States and Territories, all experienced positive monthly job ad growth in February, except the Northern Territory (-5.8%) and South Australia (-2.9%).

Seek says all states and territories are still seeing growth in terms of annual trends.

ACT experienced the strongest growth month on month with a 7% increase in February “driven by government hiring kicking back into gear”, and Seek says this follows an 8.2% drop in January over the summer break.

For job ads in February, according to Seek, the industry focus was on sport and recreation.

“With the Gold Coast preparing to host the Commonwealth Games in just a few weeks, the Sport and Recreation sector is shaping up across the country, particularly in certain categories like coaching and instruction,” Seek says.

“While a small mover in comparison to other industries, job ads for Sport & Recreation staff grew in February, with an overall 2% YoY increase across Australia. Growth in this sector has picked up largely thanks to Coaching & Instruction (which is up 20% YoY in the period between December and February), Management (12%) and Fitness & Personal Training (4%).

Seek cites research from CommBank, showing Australians are set to spend more than $4.7 billion on health and fitness products to achieve their goals this year.

And of this $4.7 billion spend, Australians spend $712 million a month on health and fitness activities – “perhaps fuelling the demand for coach and instructor roles,” Seek added.

More in this category: « ICT executives enjoy continuing rise in job demand: report ITPA has reservations about approach to attracting global talent »
back to top