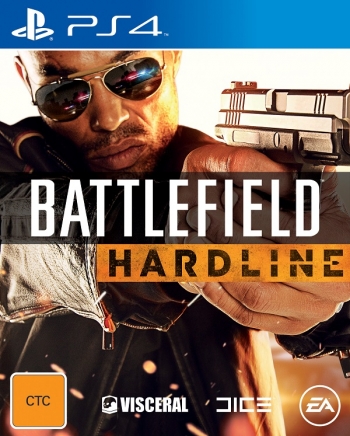 We sat down for some multiplayer action with the Battlefield Hardline Beta and members of the development team at Visceral Games ahead of the public launch.

The take-off from Melbourne was rough, the landing in Sydney somewhat unnerving. The taxi ride to the labyrinth halls of the Justice & Police Museum was a bit too jerky.  In all, my tummy was not in a great way as I sat down to play Battlefield Hardline multiplayer with scores of other journalists on networked PS4s.

Not long into our first match, it was evident that one of the core pillars this Battlefield is built upon – speed - was not going to sit well with my upset constitution.

“This is the fastest Battlefield ever” says Scott Probst – Senior Producer at Visceral Games.  Visceral best known for the Dead Space series has been tasked, working with DICE – the masters of Battlefields past – to bring a new take on the franchise to life.

Three years ago, the folks at Visceral and DICE sat down to think of how to open up the Battlefield franchise to more “worlds”.

“Ultimately you have to have a concept that is powerful enough to spread across that universe of Battlefield, which is a huge universe, [it] includes the rock-paper-scissors [concept] and all the different mechanics you have in a Battlefield game.  You have to have that representation no matter what concept you go with and I think Cops and Criminals is one of those key places that provides a new fiction that is fresh and different from the traditional military shooters that we’ve had, and changes the gameplay that puts it in a new perspective”.

Hotwire was the first of three multiplayer modes we played.  It is basically Conquest mode in motion, instead of stationary control points, both the Cops and the Criminals are racing to control a number of vehicles across the map.  Once in the driver’s seat it is up to the player to get up to speed and start earning points.  Meanwhile your buddies can “shotgun” whilst sitting on the window sill.

“”We are a new studio to Battlefield, so we had to really get in there and understand the philosophy, and from there really identify what makes a Hardline map” says Evan Champlin, Senior Multiplayer Designer.

This becomes a challenge no doubt in a game mode such as Hotwire, where the vehicles are a focus, how do you design a confined map that balances vehicle combat at speed with infantry traversal?

Champlin believes you need to “..allow cars to enter spaces where you can really feel the speed, where you can open it up and see the differences between Hardline and the last iteration of Battlefield” 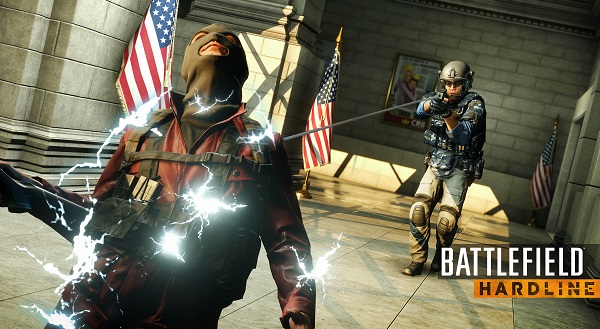 “But we didn’t want that to impact the infantry experience also, because part of our core pillar of this game was we wanted speed.  So, you get to the action much quicker, the infantry combat needed to be accessible and something you can get into fast.”

“From a level design perspective, giving them long enough spaces where you can feel the speed, but at the same time creating a looping flow, a figure 8 flow where you allow players that are infantry guys to basically cut off through the buildings, go through a back yard or an alley or something like that and ambush the vehicles on the other side.”

“We are still very much a vehicle focussed game, but our vehicles are used in different ways.  In Battlefield Hardline we spent a lot of effort designing maps that work well for infantry first.”

This is certainly true in the multi-vertical-level map we first played Hotwire on.  Cars need to move around the urban streets, through tunnels that may have infantry perched above wielding rocket launchers or similar car-crunching weaponry.

Meanwhile those same infantry need to be wary of enemies on foot lurking nearby.

The second map was Dust Bowl, a less urban take on the concept, with less verticality (unless you count the troop carrying helicopters that can be utilised)  and greater distances that need to be traversed – so again, an emphasis on the cars, bikes, tanker trucks and vans in game for transport.

The final mode we played (beyond a standard area control Conquest ) was Heist.  This is a three stage mode where criminals break into a vault, carry two bags of loot to one of two escape zones which they must defend until choppers make good their escape.

The map for this mode was beautiful, and the feel – well, this is Heat brought to life as play descends into running street battles.  It is rather comic watching a masked “robber” roaming the streets with a sack of loot on his back, dollar bills flowing from rips.

The open Beta for multiplayer in Battlefield Hardline opens to the public on the 3rd February US time (4th in AU time).

More in this category: « World of Warships fires up Interview: The Order 1886 »
Share News tips for the iTWire Journalists? Your tip will be anonymous