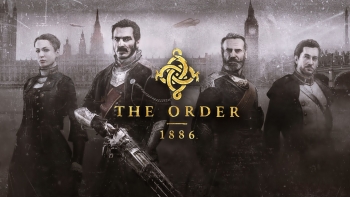 We spoke to Dana Jan and Garret Foster who are helping to put the final touches to The Order 1886 for the PlayStation 4.

Well “finishing touches” might be going a bit far, the game is due for release on the PlayStation 4 this week. However Ready At Dawn Technology Director Garret Foster and his colleague, Game Director Dana Jan took some time to discuss some of the aspects players can experience when the game is released.

There has been some consternation about the games length, perhaps it will be a relatively short experience, but it will be a beautiful one, the artists at Ready At Dawn have gone all out on The Order 1886.

“There is a certain expectation people have for the look in video games on PC or console,” explains Jan “and it is something that for next-gen we wanted to see if we could not define a new expectation from an image quality stand point. To have something a little more pleasing, something a little more organic and natural to look at, a lot more reminiscent of what you see looking at a giant motion picture image. “

“It is a lot of work to break it down and figure it out from a technical aspect to define what makes up a good looking image, there are lots of technical things that go into solving those problems, have it render on the fly.”

“Starting with what we want the end product to look like, basically drove a lot of the decision making from the way we crafted everything from lighting to materials and rendering.”

That end-product is a beautifully rendered 19th century alternative-history England with a lore that sees players taking the role of Sir Galahad - yep, an incarnation of the legendary, and supposedly good-looking knight of the Round Table – thrust into a Victorian era London full of fantastical creatures and steam-punk style gadgets and weaponry.

However, the best looking games are merely great looking movies unless they can ensure great game-play goes along with the experience.

“Yeah, all those things need to work in perfect harmony, to really make the product sing.” Says Jan “ I think you will often times see things , other forms of entertainment, TV, movies or games where you get a feeling that not everything came together cohesively. So for us, whether it was a game-play element, a scenario, where this is where Sir Galahad, or the Knights are supposed to be doing, a story moment, or just to figure out what to include in the theme, I think it all came back to grounding everything in something that is self-believable.”

“What was really useful for us was to have the alternate history angle being really strong, made it so we could leverage things that really happened, places that existed, characters that people knew about and real history, and use that to our advantage to make these other things that are fantastic or that didn’t belong seem like they did by making sure everything was cohesive.”

The team at Ready At Dawn relish being under the Sony banner, taking influences from sister game studios creating some of the most cinematic moments in video-game history. The Order 1886 is certainly drawing on the talent that has been injected into games such as Naughty Dog’s Uncharted and Last of Us series.,

“At Ready At Dawn we are pretty lucky that we have a diverse roster of people working there that come from a lot of different backgrounds. “ says Jan humbly.

“How we develop games, how we approach and design them, how we focus on driving for quality is a testament to the team. As far as friends we have at the studios you mentioned, like we have partners at Guerrilla [Games], Naughty Dog, Santa Monica, so I think putting all those pieces together you can’t help push people to make quality games.”

Garret Foster explains further how the player experience will be crafted in The Order 1886: “The look and feel is there, but a lot of effort has been put into player controls and the overall game-play element of it, making sure the shooting is right and so forth. There is a large body of work that went into making sure guns fire accurately, that they feel right, that everything when you hit it sounds right, that there is no delays.” Says Foster.

“A lot of research we did on God of War played into this game. When you are working on a combat-centric game timing is everything to make sure the game feels right. So we kind of applied a lot of those things, techniques, strategies to make sure when you hit it feels right and so that directly applies to guns as well, so when you get a successful or unsuccessful hit that the player understands immediately if it was good or bad, you get that little tick in your brain yeah, I am doing good, or I am doing bad.”

Despite a big part of the experience revolves around fighting as a group of four distinct knights, Co-Op will not be an option in The Order 1886: “We did choice very explicitly that the game has a feeling of squads, that way the characters themselves can balance information of each other. I didn’t want Galahad to feel like he is a lone-wolf character. It was very important for us to make sure there was a sense of team work. “ explains Foster.

It is obvious however that both Sony and especially the team at Ready At Dawn expect this title to grow in the future, Foster even drops the ‘F’ word as he explains further about the games structure.

“At the very core of the franchise is the idea of King Arthur and the Knights of the Round Table, and this idea of a kind of band of brothers, almost a brotherhood where this sense of honour and duty was involved. So over the course of the game we will leverage moments where you will see multiple knights working together, you can see them calling to each other, ’I need help over here’, I think all these things give you a better sense of the weight of the situation, you feel like wow! Lafayette over there is shouting that he needs me to target something, he needs me to help. These things give you better motivation, to feel like you are part of the Order.” Says Foster.

“The flipside is also true, when you are away from things, when you are doing a bit of a mission where you are solo, you will kind of miss that, there is a feeling of being [alone] that adds apprehension, because you don’t have the backup and the support of your team. It is very interesting how having the other characters around plays into the game-play.”

The team at Ready At Dawn are focussed on story and action delivery, arbitrary levelling up systems are also not part of the The Order 1886 experience.

“There isno RPG elements to speak of.” Says Foster

“When it comes to the idea of skills and upgrading our thoughts are really, for this genre, as you play the game and as you experience different types of enemies, new weaponry and gadgets, the way that you use them, or employ them over the different battles is part of your growth as a character and player. We certainly have weapons in the game where there are multiple different ways to use them to your advantage.

“For us, it was a matter of giving the players and characters more interesting things over the course of the game to add to the mix of their arsenal, see how they use them and let that be the way they approach each encounter.”

It does seem rather abstract and forced in a game such as this to give the player the opportunity to put “….Four points into Galahads Speed stat” says Foster.

Finally Dana Jan gives a little insight into how some original design elements, such as a levelling system, may have hit the cutting room floor as the four years of development on the title progressed.

“Even as a team we had gone down one direction, and by the time we got to the end we had shifted a little bit, you hope you don’t lose sight of the things that really matter and you are being true to your initial intent. But the game grows over a four year period, it is impossible not to have the game grow, especially if it is growing for the better. And to make sure everybody is seeing the light at the end of the tunnel, so to speak, and I am making sure that that vision is being carried out, yeah it is definitely one of the challenges, but I think we did a pretty good job.” Says Jan

More in this category: « Hands On: Battlefield Hardline multiplayer Quick Hits: Dishonored Definitive Edition »
Share News tips for the iTWire Journalists? Your tip will be anonymous