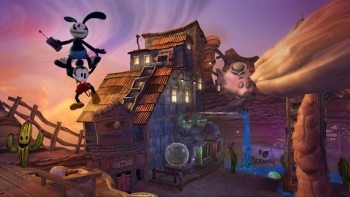 Sitting down with Warren Spector’s latest pet project is somewhat daunting, the original game fulfilled Spector’s passion and obsession for all things Mickey Mouse, but managed to be inaccessible to many as a video game.  Can going high definition, and toning down Spector’s insistence on authenticity make Epic Mickey 2 hit a sweet spot of gaming and Disney homage?

The original Epic Mickey was game designer Warren Spector’s way to relive his long standing obsession with Walt Disney’s anthropomorphic mouse.  Unfortunately, the Wii exclusive failed to connect with a wider audience, most likely due to Spector’s insistence on authenticity.

The game used a grainy old-style animation that even by Wii SD standards looked somewhat grubby.  Then there was the authentic non-use of voice in the game, and whilst this has a charming effect in games such as the LEGO series, in Epic Mickey people were expecting to hear more dialogue in their cartoon based experience. 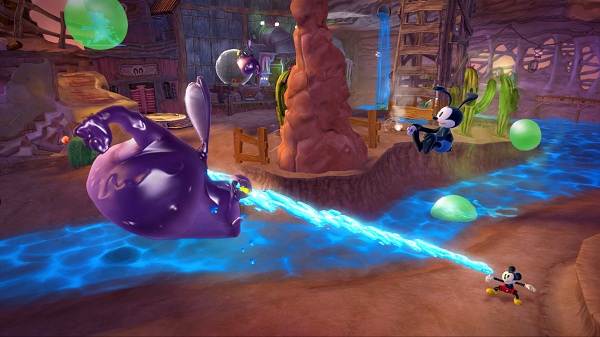 Behind these barriers however was a solid game full of intriguing and challenging puzzles based on the paint-and-thinner game mechanic and the allure of Spector’s other trademark game design; heaps of collectibles and alternative paths through levels.

Well, it seems cooler heads have prevailed at Disney and much of what made the original game good is being transferred to the sequel.

And it seems Spector has made some concessions to his passion for authenticity in order to give fans an unique game play experience wrapped up in a more familiar mainstream skin.

To begin with, as you can see from the screen shots, Mickey’s world is suddenly much more beautiful to behold.  Our session was played out on a PlayStation 3, after a little trepidation in getting the early code to boot up ok the transformation from grainy dark environments to the richer, brighter HD palette of Epic Mickey 2 was spectacular.

On the surface however, this 3rd person action/platformer could be pretty much anything on the market, but beyond that initial impression there is plenty to distinguish Epic Mickey 2 from its peers.

To begin with we jumped into a Frontier Land level with a western gulch theme.  The level is not huge in terms of geography, but it is expertly crafted to be full of game-play but not overly cluttered with elements. 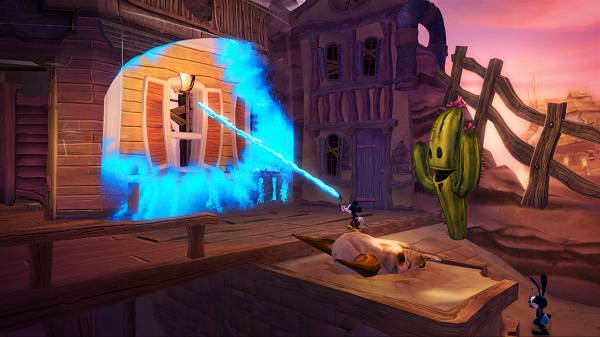 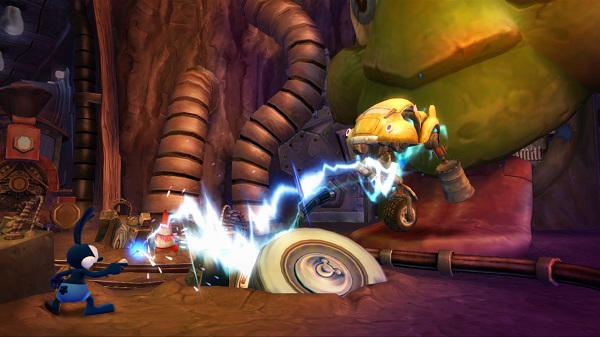 We headed on over to the saloon, using paint to recreate the doorway and enter.  Enemies bob around, but are not much of an issue, it is the puzzles within the game that create the challenge, not facing off against hordes of foes.

Still it is fun to blast colourful enemies with paint to make them friendly, or go all evil and eliminate them with the thinner at your disposal.

Going inside to grab the orb within the saloon, and then plonking it into the correct repository for all intents and purposes completes the levels, but there is sooooo much more to do on this level.

Warren Spector loves to tease players with a glimpse of goodies, inside the saloon there is a collectible tantalising within reach, but it is not until you drop outside and realise that thinning those saloon support pylons will bring the former unreachable room crashing to the ground and freeing up the prize.

Moving around the level Mickey can see a large rock rising and lowering on a jet of steam, it is too high, even at its lowest ebb, to double jump onto.  But, scattered around the level are cattle skulls blocking small steam geysers.  If Mickey thins these, thus unblocking the steam, and lowering the pressure on the large rock, enabling him to jump on and ride up to a formally inaccessible spot.

There are plenty of these hidden (and not so hidden) gems inside the level, some reward you with collectible items, whilst other level achievements may have ramifications later in the game, changing story lines and options.

Co-op is instantaneous drop in and drop out, with Oswaldo (the earlier Mickey incarnation) providing helicopter ears and the ability to lift Mickey to more out of the way realms of each level.  There are photo opportunities and much more to explore making Epic Mickey 2 a completest’ dream.

This was early code, the release date for the game is October 22nd, and hopefully some minor camera and somewhat touchy control issues can be sorted out by then making the design decisions on Mickey’s second epic foray a success. 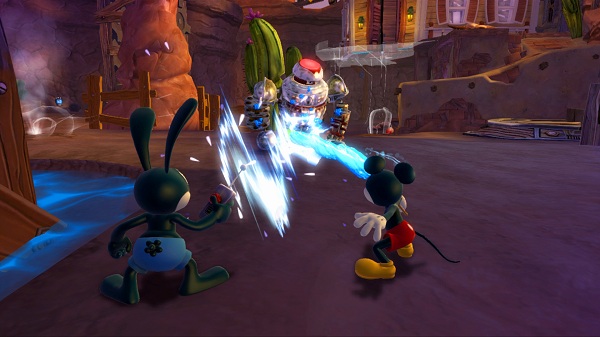 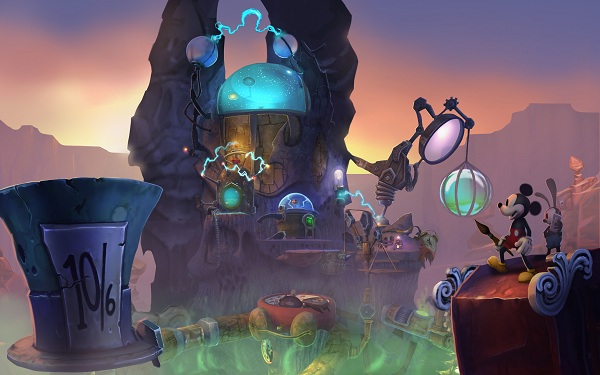 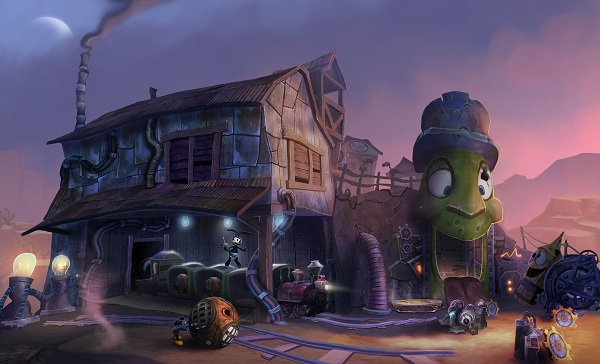