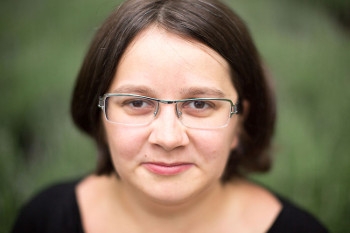 Over the years, one thing that has been always guaranteed about the free software and open source software community is that periodically there will be some unholy row or the other, mostly over issues allegedly to do with sexism and inequality.

The Free Software Foundation chairman Richard Stallman and the head of Canonical, Mark Shuttleworth, are of the better-known people who have been involved in such rows. The Linux kernel project has also been involved, due to the creator Linus Torvalds tendency to speak frankly and often using profanity when people submit bad code.

But one community that has been free of this has been the KDE Desktop Environment project. An European project, which provided the first integrated desktop environment for GNU/Linux, and is now nearly two decades old, KDE has its own means and methods of keeping things cordial.

iTWire spoke to Lydia Pintscher (pictured above), chair of the KDE board, to find out what the project is doing right. She is also product manager of the WikiMedia Deutschland.

So how did she get involved in KDE in the first place? "I was studying computer science at Karlsruhe Institute of Technology and contributing here and there to KDE's music player," Pintscher said. "One day one of my colleagues said I should come to Linuxtag with them to work on the booth. I met a lot of really great people who contributed to all areas of KDE and was hooked. I loved the people and their enthusiasm. I felt at home.

"Since then I've done many things inside KDE among them managing our mentoring programmes and helping found KDE's Community Working Group. And today I am on the board of directors, leading the organisation. I'm grateful for all these opportunities KDE has given me since that day some 10 years ago that I first showed up on an IRC channel – pretty clueless but with much enthusiasm."

Pintscher is acutely aware of the issues within the FOSS community and makes no bones about saying so.

"The Free Software community has systemic issues - many of which come down to a terribly low number of women among the contributors," she said. "There are corners that are generally better and places that are generally worse – and a lot of times all it boils down to is the leadership.

"They need to set an example. They need to inspire the next generation of contributors – and they can't just all be like them. Every single Free Software project I know of is dying to get more contributors. You can't alienate 50 percent of the population under these conditions.

"I consider KDE to really be one of the better places for women in free software. There is a reason why for example KDE has a good representation of women on its board and me as the president. We believe in setting examples.

"And this really isn't just about women. There are so many other groups that are just not willing to work in a project where they have to take abuse from a leader – not for something that should be fun, engaging and educating."

KDE has a handful of women who contribute code. If one considers all types of contributions, then around 30 are involved out of a total of something between 500 and 600. There is a KDE-Women group which has its own mailing list. And there is a five-member board, of which two are women.

Asked whether there had been instances when issues of sexism have surfaced on mailing lists or at KDE conferences. Pintscher replied in the negative.

"Nothing major has happened that I am aware of. Smaller incidents have always been swiftly been dealt with by the Community Working Group and the board. We've always concentrated on making KDE an extremely welcoming and friendly project and I think that has paid off in terms of what kind of people we attract. We have also codified this in our code of conduct to let people know what kind of a community we want to be."

KDE sets out in its code of conduct exactly what are the expectations of developers and others who interact on KDE mailing lists.

Says Pintscher: "We have that outlined in our code of conduct. Another important document for us is the manifesto. Under commitments, you can see that any project joining KDE commits to following the code of conduct.

"In general we have two groups of people that anyone can approach in case they feel there are issues related to conduct: the Community Working Group and the board. The former should be the first point of contact. They will then figure out a way forward together with whoever approached them."

She does not think behaving decently towards others in a project has anything to do with PR skills. "And it is in my opinion fine to have frank and open discussions. But what we're seeing in part isn't that. It is belittling people, calling them names and more.

"A good leader doesn't need that to make a project work. A good leader needs a vision, knowledge and enthusiasm to make a project follow their way. Someone took the time to rewrite an email Linus Torvalds wrote recently to get across the same point in less text and without making the recipient feel like they're the worst person on earth."

Pintscher says the problem of non-diverse groups leaning to rather bad behaviour towards anyone who is not in the group is nothing new.

"And it can be stopped by making the group more diverse. This is where we are at right now. It's painful as we can see. But I believe it is getting better as many projects out there show like KDE, Python, Growstuff, Dreamwidth and others. And in the end we are hopefully better off because we can build products that appeal to more people and give them more freedom."

More in this category: « Microsoft unwilling to comment on extension of SUSE deal Linux Australia suffers another data leak »
Share News tips for the iTWire Journalists? Your tip will be anonymous