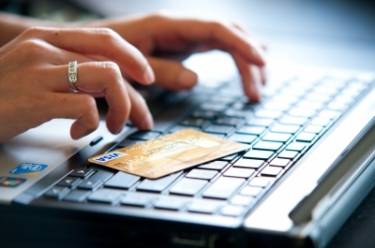 Image courtesy of sixninepixels at FreeDigitalPhotos.net

According to the survey by Roy Morgan Research, the increasing use of digital payments is likely to continue increasing and to move Australia more towards a cashless and cardless society – posing a potential threat to existing banks if they don’t take on the new disrupters and technologies.

The survey found that over the last 12 months, 7.2% of the Australian population over 14 (1.5 million) have used the relatively new and much publicised "buy now, pay later" systems such as Afterpay, zipMoney and zipPay.

And other newer digital payment systems outside of the major banks are the fintechs, (including; Android Pay, Apple Pay, Samsung Pay and Google Wallet) which were used by 6.8% (1.4 million) over the last 12 months – a result higher than the banks' own mobile payments systems which were used by 5.8% or 1.2 million.

Roy Morgan says that although the well-established bill payment services (BPAY and Australia Post BillPay) are the market leaders with 59.1%, and 43.9% using online payment platforms (PayPal, Visa Checkout, MasterPass and Western Union Pay), the newer systems represent a major challenge to these systems. 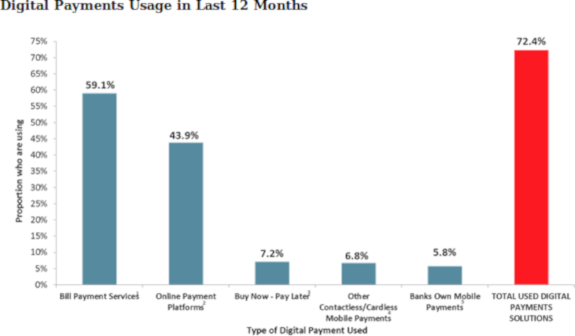 The survey showed that, in a similar pattern to "buy now, pay later", Gen Z with 10.6% and millennials with 10.4% are the greatest users of fintechs, including Android Pay, Apple Pay, Samsung Pay and Google Wallet. By contrast, only 0.6% of pre-boomers and 2.2% of baby boomers use these fintechs.

But, a big difference to users of "buy now, pay later" where females are ahead, is the fact that 8.8% of males use fintechs compared to only 5.0% of females.

Users of the latest technology, as shown by the Roy Morgan Technology Adoption Segments, are the most likely to use fintechs. These "technology early adopters" have a very high 12.4% using fintechs, compared to only 2.4% of those considered to be "technophobes".

“Australians are moving rapidly towards new ways of making payments, changing from the traditional dominance of the major banks to using new entrants such as technology companies (fintechs) and the new innovative start-ups such as Afterpay with their highly successful ‘buy now, pay later’,” says Norman Morris, industry communications director, Roy Morgan.

“As the users of the new payment technologies move from the domain of the ‘technology early adopters’ through to ‘professional technology mainstream’ and other segments, they are likely to become more universal. The increasing use of new payment technologies is being aided by the growing proliferation and development of smart phones and wearables with integrated technology such as Apple Pay and Google Pay, and an increasing number of financial institutions enabling their customers to make payments with these devices.

“All these changes pose a threat to traditional payment types such as credit cards and cash as consumers in effect can access small amounts of credit instantly. Consumers will increasingly want simplified and convenient payment systems and the industry will need to adapt to these expectations by providing more innovative solutions. Traditional financial institutions may need to collaborate with Fintechs and other third parties to keep up with the rapidly changing digital payment environment.”

More in this category: « MGM launches Spacetalk in UK market Global use of AI on the rise, but talent in short supply: report »
Share News tips for the iTWire Journalists? Your tip will be anonymous