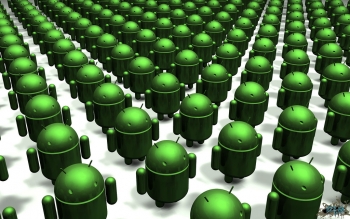 Google has quietly announced the one billionth Android device activation – that’s phones plus tablets, from all manufacturers.

It is almost exactly one year since Android passed the half billion mark, which means an average of well over a million new Android devices have been activated every day since then. Samsung Galaxy phones alone account for about one third of these.

The milestone may have gone unremarked except for a blog post from Sundar Pichai, Google’s Android boss. “Android innovation is driving tremendous ecosystem momentum and I’m excited to share that together we’ve now passed 1 Billion Android device activations,” he wrote.

“Huge thanks to the entire Android community from the hardware manufacturers, chip makers and carriers to the developers and content creators to all of you – our Android users around the world – for making this possible.”

It is, by any standards, a remarkable achievement. Android had its origins in a company of the same name, founded in Silicon Valley in 2003 to develop a Linux-based operating system for digital cameras – smartphones and tablets didn’t exist back then. Google acquired Android in 2005.

The key date in Android’s history is 5 November 2007, when the Open Handset Alliance was formed, ostensibly to develop and promote open standards for mobile devices. Apple’s first iPhone had been released in June of that year, shaking up the mobile phone market considerably.

The first Android phone, the HTC Dream, was released in October 2008. Google released the Nexus tablet in 2010. The rest, as they say, is history.

Since 2009, major Android releases have been named after sweets, each one beginning with the next letter of the alphabet – hence Cupcake, Donut, Éclair, Froyo (Frozen Yoghurt), Gingerbread, Honeycomb, Ice Cream Sandwich, Jelly Bean. The next version was to have been Key Lime Pie, but Google has cut a deal with Nestle to call it Kit Kat.

More in this category: « WA first state to get ‘finding the right lawyer’online service Yellowfin, SolveXia forge reseller agreement »
Share News tips for the iTWire Journalists? Your tip will be anonymous