New gadget socks it to ya 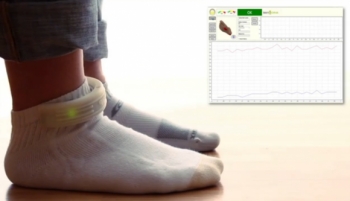 Wearable tech is taking another step forward with Sensoria, a pair of 'smart socks' for your feet.

The socks, currently gathering crowdfunding through Indiegogo, track steps, speed and distance but also weight distribution on the foot as you stand, walk, and run.

The Sensoria socks are designed to identify injury-prone running styles, then through an app they coach the runner to reduce those tendencies. Runners can also use the app to benchmark and analyze performance.

The developer, Heapsylon, said Sensoria is powered by proprietary textile sensors and a Bluetooth-enabled, detachable anklet, which enables it to deliver superior accuracy compared to other fitness trackers on the market today.

“There is no other device that tracks GAIT in real-time: the live map of how your foot lands on the ground. Most activity tracking devices can tell how far, how fast and how many calories you have burned," Davide Vigano, Heapsylon cofounder and CEO said.

"The Sensoria Fitness Smart Socks show you how far, how fast, how many calories and more importantly how well you are running."

The socks are available in a range of options for around $100, which also include an anklet and iPhone app, and have just crossed the halfway mark through their IndieGoGo crowdfunding campaign which has so far raised over US$88,000, with a goal of reaching US$87,000.

The socks are arriving at an opportune time for wearable tech, with Samsung set to announce a Galaxy watch extremely soon, and Google Glass rival Glassup going gangbusters with a crowdfunding campaing of its own.

Sensoria socks are expected to be available by Q1 2014, if all goes to plan.

More in this category: « Is this the world's stupidest iPhone thief? More ‘sophisticated’ usage overtaking voice, texts for smartphone users »
BACK TO HOME PAGE
back to top