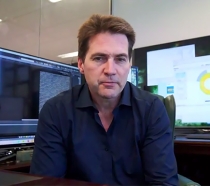 For 11 years, bitcoin enthusiasts have wondered just who in the world the enigmatic founder Satoshi Nakamoto is. A US copyright claim that was recently granted may now give the answer.

The domain bitcoin.org was registered in August 2008, followed in October 2008 with a paper posted to a cryptography mailing list titled Bitcoin: A peer-to-peer electronic cash system. The paper was authored by Satoshi Nakamoto, who also created the bitcoin network in January 2009 when he mined the first block of the chain.

Nakamoto is estimated to have mined one million bitcoin before apparently disappearing in 2010, though the smallest amount within bitcoin - one hundred millionth of a bitcoin - is named in after him, the satoshi.

Speculation has continued over the years as to just who Nakamoto is. At bitcoin's peak, his personal bitcoin collection was worth over $US19 billion.

Craig Wright, an Australian academic, has previously stated he is the creator of bitcoin, and in 2015 a series of articles by Wired and Gizmodo named him as Nakamoto citing unnamed "hackers". Yet, in subsequent stories, these claims were considered doubtful.

Many in the industry believe Wright is being untruthful. Yet, Wright has registered US copyright for the Bitcoin white paper and the code for Bitcoin 0.1, and the US Copyright Office awarded the registration to him, according to an announcement on their website this week.

The US Copyright Office has subsequently stated it is not acknowledging or confirming Wright as Satoshi Nakamoto, but nevertheless, its own registration process has considered the evidence there that Wright is able to register copyright for the very first bitcoin source code and academic paper. Despite the clinical nature of the Office's language, it is inherently stating this person — Craig Wright — has sufficient claim to copyright the paper and source code.

However, critics do not accept this as proof of the veracity of Wright's claim.

In a release on 22 May titled "Questions About Certain Bitcoin Registration" the US Copyright Office made the following statement:

More in this category: Windows 10 – new enterprise licence and marketshare »
back to top