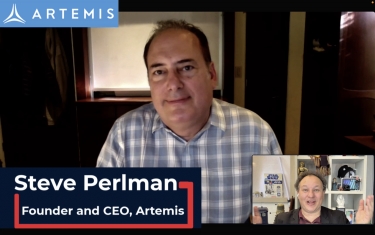 When Steve Perlman first introduced pCell technology to the world, using interference to deliver a precise cell of coverage to every connected device in a given area, it was a genuine breakthrough that was ridiculed - but Artemis Networks has just switched on its network at the SAP Center in San Jose with results that are undeniable.

The headline announcement is that Artemis Networks is delivering >1 Gigabit in just 20 MHz of spectrum in both private and public LTE/5G Networks, at the SAP Center at San Jose the first venue with a Gigabit Private LTE/5G Network.

My video interview with Steve Perlman is at the end of this article, and I believe it is an absolutely must-watch video, as are the others in this article, and the quotes below from people including former CEO of Apple, John Sculley, are mindblowing.

Given what Artemis Networks has announced below, and how this announcement was treated when it first emerged in 2011 (as iTWire reported here) and in another article from 2015, which shows Steve Perlman explaining his technology at Columbia University and Stanford - this appears to be what has happened to Steve Perlman and Artemis Networks.

His breakthrough in connectivity solves all of the problems of wireless technologies as we currently know them, and brings forth the era of next-gen wireless technologies - which works seamlessly with existing devices using LTE and 5G connections. There are now over 100 papers from academia verifying the technology works - and of course, the installation at the SAP Center in San Jose, as described below, is immutable proof, and cannot be ignored by the industry any longer, and if you ask me, it is the foundation upon which 5G's promises can be finally delivered upon, and upon which 6G will be built.

So let's take a look at Artemis Network's video explaining what pCell technology is, and how it works:

Ok, so what is the new announcement?

It is of Artemis Networks now unveiling the pCell Multi-Gigabit LTE/5G vRAN (Virtualized Radio Access Network), which delivers 10x the capacity of conventional LTE/5G networks in the same amount of spectrum.

As the company explains, while existing LTE/5G networks average less than 100 Mbps in 20 MHz of spectrum, a network powered by pCell with equivalent spectrum averages over 1 Gigabit/second, and over 7.5 Gigabits/second in 150 MHz, faster than any mobile network in the world.

“The pCell vRAN’s unique ability to multiply spectrum capacity by over 10x (and growing) will ultimately transform the lives of the billions of people who use mobile networks every day,” said Steve Perlman, Artemis Founder & CEO.

“The pCell vRAN enables a new era in wireless communications, when fiber- class capacity, uniformity, and reliability are available over the airwaves. pCell vRAN delivers consistent 4K streaming in both directions, enabling a new class of applications, such as photo-realistic Extended and Augmented Reality interactively streamed to thousands of users, regardless of density.”

The Artemis pCell vRAN delivers uniform high-speed data rates, enabling every arena seat to stream 4K video, while the existing carrier networks deliver widely varying data rates seat-to-seat, most too slow to stream HD video. The pCell Gigabit Private LTE/5G network is currently in use by beta test attendees during games and events and will open to all attendees later this year.

“Attendees at live events want to stream video down and up from any location in the arena but existing cellular and Wi-Fi systems don’t deliver the uniformity of pCell coverage. The pCell network’s performance and consistency allows us to leverage new technologies like Augmented Reality to deliver compelling experiences to fans.”

pCell technology is based on a radical new approach to wireless that exploits, rather than avoids interference, resulting in a more than 10 times increase in network capacity per MHz of spectrum, while remaining compatible with unmodified LTE and 5G phones and devices. Over 100 academic papers have been published about the underlying technology since its invention.

“pCell is the most innovative technology I’ve seen in wireless in a very long time, upending everything we’ve been taught about wireless,” said Craig Moffett, Senior Managing Director of MoffettNathanson, “We’ve all grown up thinking that spectrum is a scarce resource, but pCell breaks that equation, delivering over 10 times the performance of existing LTE and 5G technology.”

“We’re excited to see innovative and disruptive technologies that are adopting CBRS,” said Iyad Tarazi, CEO of Federated Wireless. “Artemis holds enormous potential for high speed, low latency use cases and we look forward to seeing their success in this rapidly growing market.”

With Multi-Gigabit speeds in free CBRS spectrum, uniform performance, and the ability to support 10s of thousands of users, pCell catapults the Private LTE/5G market from niche use cases to major venues, campuses, enterprise and hospitals, delivering 10 times carrier-grade performance.

“Artemis pCell is one of the largest technology breakthroughs I’ve seen in my career,” said John Sculley, former CEO of Apple and a founding investor of MetroPCS, “But Artemis’ real genius is getting around longstanding barriers to entering the market by delivering vastly higher performance at far lower TCO via Private LTE/5G in the new CBRS spectrum. For the first time, large mobile customers including venues, campuses and enterprise can choose mobile infrastructure based on performance, quality and economics, and most significantly, enabling future applications. Breakthrough technology like pCell enables entirely new media experiences like Extended and Augmented Reality that are expected to be huge growth opportunities for mobile wireless in the future.”

Subject to availability of components, pCell systems will be increasingly available through 2022.

For plenty more information, here is an amazing interview that Steve Perlman generously allowed me to film with him, with a follow-up interview to come!