Report suggest Apple will replace iPad mini with folding iPhone tablet, but why would it? 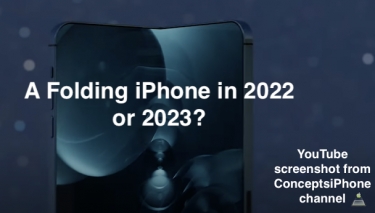 With folding phones still much more expensive than traditional phones and tablets, while I hope Apple makes an iPhone that turns into an iPad, I don't see such a device replacing the iPad mini anytime soon.

A report from GSM Arena quotes a Chinese article from Mydrivers suggesting that a future folding iPhone would replace the iPad mini, and support the Apple Pencil.

There's also talk of an iPhone Flip, that would be like a flip phone, similar to the Samsung and Motorola versions of such a device

While I hope Apple brings Apple Stylus support to the iPhone 13 range before any Apple folding phones are likely to hit the market, I would imagine that any folding iPhones replacing the iPad mini would happen later this decade.

After all, the iPad mini itself would be much more affordable than any folding iPhone, and with an iPad and iPhone purchase, Apple makes two sales, not one.

You also get the utility of using both devices separately - something you obviously can't do with a single device.

Of course a single device is one less device to carry, but it would, by necessity, at least in its earlier versions, be thicker than a traditional iPhone or iPad mini, because the device has to fold over itself.

There's no Apple VR or AR headset, nor will Apple be the first with a car, obviously, but when Apple does launch new styles of hardware and form factors, it normally does them right - and they become the new benchmark for everyone else to copy.

Since the iPhone, every phone looks similar. Apple launched the MacBook Air, and every PC maker came out with "Ultrabooks", the Intel name for ultra thin and light notebooks. So many wireless headphones look like AirPods these days. All tablets essentially look like iPads.

Even the Apple Watch was wasn't the first smartwatch, and yet there are quite a few "square faced" Apple Watch clones out there running Android, or Fitbit-style operating systems, with Apple having sold over 100 million of its own Apple Watch devices a testimony to its success, and putting paid to some questionable analysis calling the Apple Watch a failure back in the early days that not only turned out to be very untimely but wildly inaccurate.

Apple redefines markets when it enters them, and when it launches a folding phone, this reality is unlikely to be any different - Apple will have figured out how to do folding or rollable phones right, just as it is expected to with its AR/VR glasses plans, and any future Apple Car, too.

I just don't think Apple would remove the iPad mini, which starts at A$599 in Australia and $399 in the US, just because Apple launches a phone that can fold or roll out into an iPad mini at what would like be well north of $1000, $2000 or more!

So, until then, if you want an iPhone and an iPad mini, they're available as separate devices, and it will be at least 18 months if not longer before any merger of both devices arrives - and despite the cost of two devices, those two devices are sure to be cheaper than one single device, at least at the beginning/

I'd much rather see Apple bring Apple Pencil support to ALL of its devices and consider going the rollable route too, than than going for the fold.

After all, you have to know when to hold 'em, when to roll 'em and when to fold 'em, but which one will ultimately emerge from Apple's labs is yet to be seen.

In the meantime, here's a couple of slick concept videos for an iPhone Fold and an iPhone Flip that look cool, although they're not the real deal - they are concepts from a talented designer called "ConceptsiPhone" who knows how to make really cool videos.

More in this category: « VIDEO Interview: Kate Toon talks Clubhouse and the wonderful multiverse of misfit entrepreneurialism First look - the 2020 MacBook Air with M1 processor - wow! »
Share News tips for the iTWire Journalists? Your tip will be anonymous