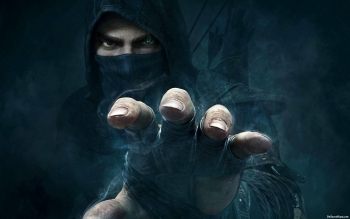 In the hey-day of the shooter the Thief games were a whiff of gaming fresh-air in a rather enclosed and somewhat smelly market of Doom clones.

If our protagonist was caught in the open, outside of the protective shroud of shadow, it was game-over.  Garret was not armed with an Usi or SAW, in fact the usual medieval guard armed with a short-sword would make short work of our discovered thief.

And so, gaming in the Thief world would consist – as one would expect – of a great deal of planning, sneaking around, perhaps blackjacking a guard from behind, snuffing candles, choosing alternative paths and being rewarded with both treasure and storyline.  Thief was a well-liked, somewhat overlooked series of games.

Unlike the game’s mechanic of offering multiple ways to get to a target, the reboot of Thief does not stray too far from the franchise legacy path.  Garret is still sneaking through the shadows, armed lightly and careful not to make Carol-Anne’s mistake of going to the light.

The opening couple of hours sees Garret meet up with former thief associate, the lithe, Erin.  Erin is cheeky and wants to take on some ‘big’ jobs.  Well in here enthusiasm both her and Garret come across a bunch of hooded cultists in the middle of what is some sort of summoning.  Erin becomes impetuous and needless to say, bad things occur.

This is all a way to get players up to speed both story and mechanics wise, and then drop their character Garret into a time frame where he will need to begin his thieving again.

Garret learns how to keep to the dark, how to use a number of gadgets - particularly his bow with multiple styles of arrow heads – find a safe path, and swipe things left lying around, or behind reasonably easy to find and disarm, locks.

In a world that now has Uncharted, Square Enix’s reimagining of Lara Croft’s Tomb Raider was perfect, and is justifiably achieving success.  However in a world post games such as Dishonored, our experience with the first few hours of Thief may highlight a problem for this reboot.

In a way, faithful as it is, there is a very likely chance that faith is not returned.  Those that remember the game fondly (it is over ten years since the last Thief game was released), and are still playing video games, will certainly give it a look-see, however for a new audience the opening sequence of the game felt too old-school.

Presentation wise – and we were playing the PS4 version – no problems, though the town feels somewhat small by comparison to similar modern games, it is presented very nicely with grime, lightning filled skies and plenty of buildings to explore.

Story wise we can see potential in the full game, this may be the saviour of Thief, for though the game-play is primarily about sneaking around, we did find moments when discovered, that we felt powerful enough to fight our way from trouble.  In fact, after a short time, it felt that violence, at least, sneaky violence, was a viable path past trouble.

Hopefully this is not possible for the entire game, a significant part of this games enjoyment will be in the ability of the development team to bring their experience from great past titles such as Splinter Cell and Rainbow Six.  Thief should require planning, good use of tools and adaptation to the situation, cat-and-mouse game-play and multiple solutions.

All of this is being promised by the team, and the rest of us will find out when Thief  is released later this month.

THIEF is due for release on 27TH February 2014 across Australia & New Zealand for Windows PC, PlayStation®3, PlayStation®4, Xbox 360 and Xbox One.

More in this category: « Netflix announces massive $3 billion spend Telstra in talks to bring Google's Chromecast to Australia »
back to top