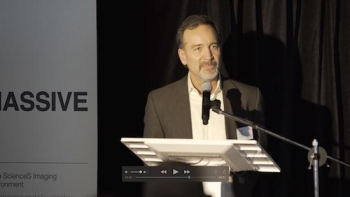 Massive (Multi-modal Australian ScienceS Imaging and Visualisation Environment) is part of the Monash Research Cloud, which in turn is part of the Nectar (National eResearch Collaboration Tools and Resources) Research Cloud. The idea is to provide Australian researchers with access to the computational infrastructure they need wherever they are in the country, and to enable local and international collaboration.

The original Massive system (now known as M1) was based on IBM servers and Nvidia GPUs.

Dell's APJ manager of high-performance computing Andrew Underwood told iTWire that the cluster was designed for 100% utilisation and optimised for power efficiency as well as performance.

M3 is "one of the world's first 100 gigabit Ethernet end-to-end deployments," he added.

In addition to providing the server hardware, Dell collaborated with Monash on the design of M3 - along with Intel, Mellanox and Nvidia - and led the services side of the project, looking after installation, configuration, support, and so on.

This is the first Massive generation that Dell has been involved with, although Monash's MC2 cluster was also based on Dell C6320 servers.

And Cave2 - the university's immersive 3D environment - was built around Dell servers and Nvidia Maxwell GPUs.

Underwood said Dell is supplying similar systems to commercial customers in various sectors including finance, oil and gas, artificial intelligence, and digital content creation such as animation and special effects.

"High performance computing is a key pillar of Dell's business," he said.

High performance computing is "indispensable" for large scientific instruments such as the Australian Synchrotron, the Square Kilometre Array and the Large Hadron Collider, said Nvidia accelerated computing CTO Steve Oberlin (pictured), noting that Nvidia had been one of the partners for all three generations of Massive.

M1 and M2 are still in use and are fully subscribed, standing as a testament to GPU technology, he told iTWire.

But M3 represents "a significant boost" in terms of the memory bandwidth and processing speed.

Australia's chief scientist Alan Finkel said there was a nexus between science and technology in that new instruments enable us to learn more, and that knowledge leads to the development of the next generation of instruments. "Each enables the other," he said, adding that it will probably take two to five years before the contribution of M3 is fully understood.

In the commercial space, the fastest growing impacts of GPU technology are in deep learning, Oberlin told iTWire. This is being used by service providers such as Google, Facebook and Twitter, who are applying "lots and lots of GPUs" to massive data sets in order to provide features such as voice recognition and the ability to search images and videos that have not been manually tagged.

"All of these things are based on deep learning, trained on GPU arrays" and deliver value to the user base, which then contributes more data that can be used to further improve the services - "a virtuous cycle."

Scientists are able to achieve something similar by pooling their data, providing more opportunities to find patterns and anomalies, he said. Monash academic vice president and dean of medicine, nursing and health sciences Christina Mitchell made a similar point, saying that the level of computational power provided by M3 allows data collected by different researchers to be linked, potentially leading to important outcomes such as explaining why particular antibiotics are no longer effective (and presumably allowing the development of new ones).

"Society benefits tremendously from science and research," said Oberlin. "The value to society is incalculable compared with the cost."

The total cost of M3 was not disclosed.

More in this category: « My voice is my password Is your infrastructure a weapon? »
Share News tips for the iTWire Journalists? Your tip will be anonymous