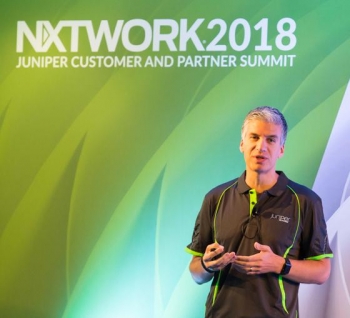 Network vendor Juniper Networks is working to simplify things for its enterprise customers as they move into a multi-cloud world.

Juniper Networks chief executive Rami Rahim — who joined the company as employee number 32 and worked on Juniper's first product — said there was "way too much complexity" in networks and IT systems, and this is costing billions in lost productivity, "in some cases downright crippling companies".

But Juniper was built on the idea of solving hard problems, and Rahim said the plan is to "shift complexity from our customers to us".

"Cloud and multi-cloud are the next big chapter" for IT as a whole, he said, and with Contrail Enterprise Multicloud "we've democratised the era of cloud operations... it is dead simple to use."

Juniper chief product officer Manoj Leelanivas said 50% of enterprise applications were expected to be running in the cloud by 2020, and Juniper had a role to play in simplifying the IT world.

Contrail Enterprise Multicoloud is an open alternative to other vendors' proprietary approaches such as ACI and NSX – one that can be used with private or public clouds, and from bare metal servers to containers.

"We are going on a standards-based path. We are not doing anything proprietary," he said.

Juniper has multiple customers who have their own data centres as well as using public clouds such as AWS and Azure. Large enterprises want multi-cloud-ready data centres that can burst into the cloud when necessary to meet peak demands (moving entirely to public cloud is too expensive, he observed).

And where an organisation doesn't have its own data centre, Contrail Enterprise Multicloud allows it to move workloads between public clouds.

In either situation, it saves customers from paying what Leelanivas called the "VMware tax".

The plan is to extend Contrail Enterprise Multicoloud to campus and branch networks. Campus networks need unified security and a mechanism to accommodate best of breed wireless providers (such as Aerohive, Aruba and Ruckus), while branch networks are often seen as chokepoints calling out for the delivery of multiple functions through one — possibly multi-vendor — platform.

More in this category: « Little benefit from switching to Google's AMP: claim VIDEO INTERVIEW: CA Tech's Chris Kline explains AIOps and why it's relevant »
BACK TO HOME PAGE
back to top