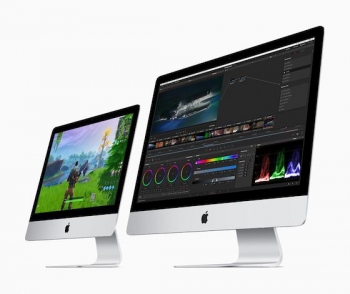 Like plenty of other people, I've held off buying an iMac until new models were announced, but I can't get excited by them.

I'm not hugely surprised that the new iMac configurations are really just "speed bumps" with faster processors and graphics chips, but I had hoped for something better.

The disappointment is that Apple has persisted with the design that prevents internal storage upgrades, and that only makes provision for user-installable memory upgrades on the 27-inch model. So if you want an extra 8GB of RAM for the 21.5-inch iMac, it'll cost you $320 even though a brand-name 8GB 2666MHz DDR4 RAM module can be purchased for less than $100.

Making matters worse, the stock storage on almost all of the new models is a Fusion Drive rather than an SSD. The exception is the quad-core 21.5in iMac, which comes with a hard drive. In my experience, it's not easy to find someone that runs a recent version of macOS and is happy with a hard drive's lack of performance.

I believe a large part of the problem is Apple's misplaced obsession with thinness.

It makes sense to make phones as thin as you can — especially as screen sizes keep increasing — because there's only so much room in a normal pocket. It's not quite as important for a tablet, and even less so for a notebook.

A MacBook or MacBook Pro could be a few millimetres thicker or thinner without making much difference to most people.

But within reason, the thickness of an all-in-one desktop like the iMac is irrelevant, especially when you consider that the recent models have really just been thin at the edges. I'd happily go back to the industrial design of iMacs from the late 2000s if that meant I could upgrade the RAM as and when I needed, instead of having to make an upfront and expensive bet on how much I'll need for the life of the computer.

I'd also be more than happy to lose the "seamless" back panel in exchange for a removable cover providing easy access to the internal storage and the ability to easily replace or upgrade the storage module. Every Mac I have ever owned has sat with its back to the wall, so it really doesn't matter how stylish that aspect of the design is.

At least there's no "Australia tax" – if you convert the prices shown on Apple's US site to Australian dollars and add 10% for GST, the result is pretty much line ball. In fact, the two new 21.5-inch models are slightly cheaper here, eg $2299 for the six-core version compared with a converted US price of $2328. But then, most vendors like to set almost-round prices ($199, etc), so I wouldn't read too much into this difference.

Another part of the issue seems to be that Apple is unwilling to leave money on the table for aftermarket suppliers. I can understand the company's desire to make as much money as it can, but chiselling customers in this way doesn't engender loyalty.

I plan to buy an iMac to replace an older model, because my business partner and I are still more productive when using macOS rather than Windows, though the gap keeps getting smaller.

I accept that Apple puts a lot of work into developing new products, and that necessarily translates into higher prices. But that doesn't justify charging a huge premium for marginal variations in specifications.

So this could well be the last Mac I ever buy unless Apple chief operating officer Jeff Williams acts on his observation that "we're very aware of" product costs and delivers more realistic pricing.

I'm reminded of the trajectory of my relationship with Optus as a customer. At one stage, I used the company for phones, cable Internet and pay TV, and could reasonably have been described as a "raving fan". But over the years, Optus gradually reduced the value it delivered, and I ended up just using it as an ISP. I went from "you're crazy if you don't at least look at switching to Optus", to "well, you could see what Optus can offer, but I can't recommend them any more". And then I moved house, and it lost my business completely.

Yes, I get that it's been years since Apple Computer became Apple. But — perhaps because I've been an Apple user since 1978 and a Macintosh user since 1984 — I can't help feeling resentful that Mac users now seem to be regarded as legacy customers who can be milked until Apple is finally confident that it can drop the product line completely.

More in this category: « Does retail tech deliver what customers want? 'You've got to give the people what they want' »
Share News tips for the iTWire Journalists? Your tip will be anonymous