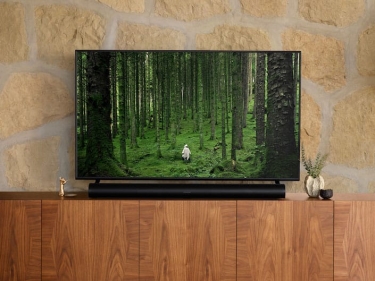 Sonos delivers a big soundbar with a sound and a price tag to match.

Longtime iTWire readers will know that I've been impressed by Sonos products (eg this previous review), so I was very pleased to be given the chance to review the company's new Arc soundbar featuring Dolby Atmos.

It's a big unit at 114cm wide and 12cm deep, and Sonos recommends it for use with TVs larger than 49in. It's not that it won't work, but a soundbar that's wider than the screen does look odd. A wall bracket is available for an extra $99 if you don't have a suitable piece of furniture for it to sit on.

Physical setup is usually very straightforward, as it just involves connecting the power cable to a wall socket and the HDMI cable to the TV's ARC port. The Arc has an Ethernet port in case your Wi-Fi isn't up to the job of streaming audio content and sending control signals to its location.

Thanks to the Sonos app, the logical setup is also simple. Apart from joining the soundbar to the Wi-Fi network and identifying the room it's in (in case you have an Arc in more than one room, or because you want to use it in conjunction with other Sonos products such as the Sub subwoofer), the app uses the microphone of the iPad or iPhone it's running on to tune the Arc to suit its surroundings. Sonos calls this feature Trueplay.

The tones emitted from the Arc during the process are quite loud and penetrating, so don't do this at night or if your baby is sleeping within earshot.

First impressions were very good. The Arc is great for movies. Sonos talks about "cinematic sound," and even when Dolby Atmos isn't available (more on that later) it does give a great experience. Dialogue is very clear, noises such as breaking glass are crisp and realistic, and theme and background music sounds 'right.'

And it's a very comfortable sound in the sense that I found I quickly became immersed in the content and had to deliberately concentrate on what I was hearing.

Night mode is useful in situations where you need a certain volume in order to hear the dialogue but you don't want explosions and other loud noises to disturb other people. I could hear the difference

Audio quality is subjective and I've never claimed to be the possessor of golden ears, but I've been very happy using my cherished 40-year-old Kef Celeste III speakers and a recent Pioneer amp with this TV. It might only be plain ordinary stereo, but it does the job so well that I've never given serious consideration to using anything else. (I'm not the only one who thinks these speakers stand the test of time.)

But I have to admit that the Arc does sound better.

The most disappointing thing about the Arc is that Sonos has made it impossible to take advantage of the Dolby Atmos capability (which provides vertical separation as well as left-right separation) unless you have a very recent TV with an eARC port.

That's because – unfathomably, In my opinion – the Arc has just one HDMI port. If you have a source such as an Apple TV 4K or a UHD Blu-ray player that delivers Dolby Atmos connected to a non-eARC TV, you simply can't get Atmos sound. I checked this with Sonos, and they confirmed that "the TV determines if Atmos content can be delivered by Arc."

Some less expensive Atmos soundbars have a second HDMI port so you can plug the Atmos source into the soundbar, and the soundbar into the TV. Why the premium-priced ($1399) Arc lacks HDMI video passthrough is a mystery to me, as it eliminates the Arc's key feature (Atmos) for most potential buyers.

I have attended a demonstration of another manufacturer's Dolby Atmos soundbar, and it does make the experience even more cinema-like. But because of this HDMI shortfall and because my TV just predates eARC, I can't tell you how well Atmos works on the Arc.

If your TV is even older and doesn't even have an ARC port, you can use its optical output to connect it to an Arc. You still won't get Atmos audio, and there's another problem. Instead of building a S/PDIF Toslink connector into the Arc, Sonos chose to provide an optical to HDMI adaptor. As the Arc has only one HDMI port, that means there's no way for HDMI-CEC signals to reach the soundbar. So it doesn't power up and down with the TV, and the TV can't control the Arc's volume setting.

So unless you're happy to get some exercise by walking over to the Arc and using its front panel to adjust the volume, that leaves using the Sonos app or a voice assistant.

Having to unlock your phone or tablet just to change the volume is an irritation, especially when an unskippable ad or promo suddenly plays much more loudly than the show you're watching. Unless you've prepared in advance, you need to open the app, select the room, and use a slider that makes it difficult to set the volume within what it sees as a very narrow range between too quiet to hear and much too loud.

According to the user guide, you can "turn on hardware volume control in your settings if you want to use the buttons on your mobile device to control the volume on Sonos even when you’re not in the app." Using an iPhone, the buttons could indeed control the Arc's volume, but only when the app was active.

But wait... there's the vaguest mention in the online Sonos User Guide (but not in the volume control section) that you can set up the Arc to respond directly to your TV's remote control. In the app, select Settings>System>[room name] and scroll down to almost the bottom of the page, where you'll find Remote Control Setup. Point the remote at the Arc, press Volume Up, and you're done. There's no mention of this in the setup leaflet, or (as far as I could see) in the Help & Tips section of the app.

This illustrates another failing: the quickstart guide is fashionably minimal (ie, next to useless once you've plugged in the hardware), the online user manual is too generic, and the Sonos app's Help & Tips section is nowhere near sufficiently comprehensive. Some might be happy to explore every corner of the app, but I suspect most people paying almost $1400 for a soundbar would expect comprehensive instructions.

Even if you're OK with voice assistants (I'm not), there's a certain irony in talking over the dialogue that you can't hear in order to tell the assistant "Hey Google/Siri/Alexa, turn it up in the lounge.". Unless you can also control the player via the assistant, you'd need to reach for the remote to replay the part you couldn't hear, so why not use that to adjust the volume? Other Sonos voice commands include mute/unmute, and playing music from the assistant's default music service.

I tried using the Arc with a second TV that required the use of the optical to HDMI adaptor. Despite repeating the Trueplay tuning process, any sibilance in voices was more noticeable than usual with that TV, or during my previous testing. The nature of the connection shouldn't make any difference, but as the second room has a hard floor and fewer soft furnishings I was left wondering whether the problem was that Trueplay couldn't fully compensate for the room's acoustics.

Music played from Spotify and iHeartRadio (just two of the many supported services), and from my NAS (shared folders and UPNP servers are supported) gave good sound, but not as good as I remember from other Sonos speakers. The stereo stage seemed relatively narrow, and I kept wanting to adjust the bass and treble. That's not something I need to do when listening to the stereo system mentioned earlier or the Sony SRS-XB31 speaker that I use for listening to music in the kitchen. Nor, as far as I recall, has it been an issue when testing other Sonos speakers. Some music sounded fine at the default settings, but some tracks were far too bassy (eg, Eve's Let Me Blow Ya Mind), while others (eg, Motorhead's Ace of Spades) lacked 'oomph.' As for The Crystals' Da Doo Ron Ron, the Spector Wall of Sound just wasn't there. The bass and treble settings aren't available alongside the volume control in the Sonos app: the path to them is Settings>System>[room name]>EQ. Another disappointment is that night mode is apparently unavailable for music playback.

Price isn't everything, but there are very few soundbars on the general market that cost as much as the $1399 Arc except for models that include subwoofer and rear speakers. If you want to combine extra speakers with an Arc, the Sonos Sub is $999, and the One SL speakers are $269 each – with no discount for buying them as a package. I suspect you'd be happier listening to music if you had a pair of One SLs in the same room as the Arc. Add the wall bracket, and the total is $3035. That's a pretty serious purchase, so you should probably buy from a retailer that lets you audition the Sonos gear alongside the other systems on your shortlist.

You won't get the best from an Arc without a very recent eARC-equipped TV, and you might not be completely satisfied when using it as a wireless speaker for music. But when it comes to its primary purpose – playing the audio from your TV – the Arc does a fine job.

More in this category: « Review - GIGABYTE AERO 15 OLED performance laptop for gamers and creatives alike
BACK TO HOME PAGE
back to top