Christmas music is bad for our mental health 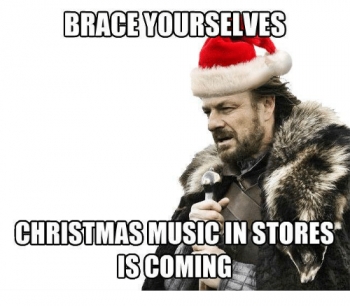 COMMENT Fitting right into the "bah humbug" category, we find research that notes endless repeats of Christmas music is bad for mental health.

Someone once said (paraphrasing a well-known aphorism) that "Christmas comes but once too often." And for retail staff, it seems this might actually be true.

For many shoppers, the endless parade (tirade?) of Christmas-themed music announces that wallets are too full and there is a need to transfer wealth via unwanted baubles to others close-by (generally family-members).

However, shoppers tend to visit the malls and stores for limited periods of time. Spare a thought for retail staff who are serving (what seems to be) a life sentence.

Permit a digression. Everyone is aware of the concept of the "12 days of Christmas." But does anyone know when they start? In fact, Christmas Day is the FIRST day of Christmas… and the 12 days run until January 5th. During this time, it is expected that all decorations will be erected late in the evening of December 24th, and taken down 12 days later.

It is only the pressure of the retail industry that translocates the starting date to somewhere in the middle of December (and is it just me, or have the twelve days stretched to somewhere closer to 60?).

Getting back to our (often temporary) retail workers.

Victoria Williamson, a researcher on the psychology of music at Goldsmith's, University of London observed, "at first we like music a bit, then we like it more and more until it hits a peak. And then we crash down – we have overheard it. That's when boredom and annoyance at the repetition of the same sound hits home.

Anyone who has worked in a Christmas store over the holidays will know what I'm talking about." When asked why holiday music seems to have a polarizing effect, driving some people crazy while others like, or at least, can tolerate it, Williamson suggests that music's effect on us in any situation depends on our own psychological state. She suggested that entering the malls and stores with a negative or stressed attitude will more likely result in a dislike or repulsion of the music.

Psychologist Linda Blair said, "People working in the shops at Christmas have to tune out Christmas music because if they don't, it really does stop you from being able to focus on anything else. You're simply spending all of your energy trying not to hear what you're hearing."

Of course, there's plenty of research to show that slower, familiar music helps shoppers stay in store longer; spending more. Would that be a reason to have the open spaces in the shopping malls play up-tempo music while the stores play the slower tunes? Perhaps some personal investigation is in order - I'm off to the stores to start my shopping!

Merry Christmas to all our readers.

More in this category: « A prediction – the cloud will win Why do we not trust the COVID-19 app? »
Share News tips for the iTWire Journalists? Your tip will be anonymous