If you can't make it work, just lean on it, with a shovel.

Launched in May 2018, the Mars Insight lander arrived on the surface of the planet on November 26th of that year and almost immediately started work by unfolding its solar collectors and deploying instruments. This lander is not mobile - wherever it landed is where it stays. That became something of a problem.

The lander is equipped with a multitude of experiments including the ubiquitous array of cameras along with various weather detectors for temperature, wind, air pressure etc.. The primary tools are three-fold.

It's HP³ that has a problem. The probe is (very gently) jack-hammered into the soil to achieve the intended measuring depth - drilling was dismissed due to the weight of equipment required to drive the process. The entire structure weighs just 3kg.

For some reason, the soil at the landing site was 'clumpier' than had been observed at other landing sites when digging arms burrowed into the surface. This caused the jackhammer to jam soon after it was deployed. After many attempts over a year aimed at getting it moving again, nothing seemed to work.

After extensive testing on an engineering model here on Earth, engineers found that by using the lander's shovel to push down on the probe while it was hammering, progress could be re-started.

There was concern that the shovel may damage the data and power connection cable, but many hours of practice in the simulation gave the team confidence.

This image (from the main on-board camera) shows the shovel pushing on the probe and narrowly avoiding the tether. 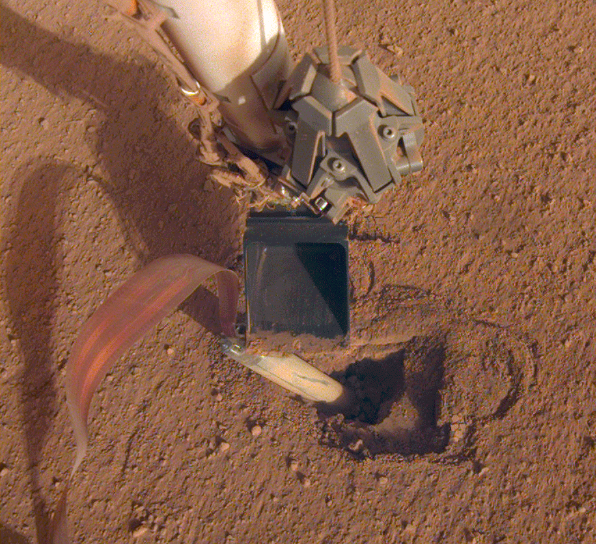 Since the resumption of hammering, the probe seems to have descended another centimetre or so and the team is confident of further progress. In the future, the probe will descend below the surface and the only remaining option will be to fill in the hole behind it and continue to press down it order to assist with downward force.

Published in Space
Tagged under