0
Shares
By
The fake iPad demo video on Apple's website reveals netbook makers have little to fear from the iPad.

Steve Jobs basically slagged off netbooks as a bag of hurt at the iPad launch, claiming they can't do "anything" better than a notebook or a smart phone. Jobs insists that the iPad is the true missing link between the MacBook and the iPhone. Even with his Reality Distortion Field in overdrive, Jobs has failed to convince many people that the iPad is the heir to the netbook throne. Instead, the iPad comes across as little more than an overgrown iPod touch plagued by all of the iPhone OS' shortcomings. Apparently the iPad does have one amazing killer feature - it can float in midair. 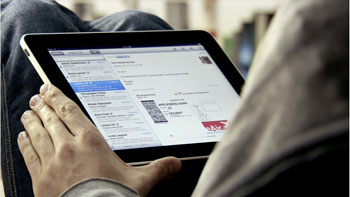 The key reason why the iPad won't kill the netbook is that it lacks a physical keyboard. I know there's an optional external iPad keyboard, but it's not exactly mobile-friendly or lap-friendly. The iPad might be fine for one-finger typing like the iPhone, but I can tell you from experience that it's pretty slow going when you're trying to write more than a quick email on an iPhone.

The iPad's virtual keyboard is almost a full-sized keyboard, but it looks horrible to type on properly for extended periods compared to a netbook. Look at the ergonomically insane way the guy is holding the iPad in the photo above, which is taken from the iPad demo video on Apple's website. Imagine trying to sit like that at the bus stop, on the train or in a coffee shop. Then imagine trying to sit up straight with this slippery, shiny device balanced precariously on your lap while you type with both hands. The iPad is clearly not a productivity tool, it's designed for consuming content rather than producing it - which suits Apple because the goal of all Apple products is to drive you to the iTunes store.

Speaking of the photo above, you can watch the full video on Apple's iPad page - but I have to warn you that the stench of Apple Kool-Aid is almost nauseating. The way these guys gush about Apple and the iPad, you'd think they'd cured cancer and perfected cold fusion all in the one day.

The video also supports my belief that the iPad's best role is as a coffee table computer, because you mostly see it used on the couch. Actually, when you watch closely around the 2:30 mark (below) you can see that the typing scene has been faked. Until now every shot in the video is like the one above - showing the man holding the iPad in place on his angled lap with his left hand, the device up near his knees while he touches the screen with his right hand. If he removed his left hand, the iPad would obviously slide down his legs. 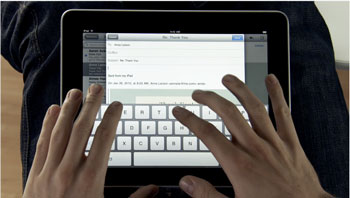 When you see him type with both hands, the video cuts to an overhead shot which doesn't look real (see above). At this point, the man is only resting the tip of his left thumb on the bottom rim of the iPad and it's not even in the centre. Despite this, the iPad doesn't tilt an inch as he types. This part of the video has clearly been faked, unless this guy is wearing velcro pants. 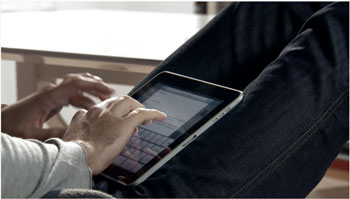 In Apple's defence, around the 7:15 mark you do see the man typing from another angle (see above), although the iPad is now resting down in his crotch. The angle that he's sitting at would be torture for your back and neck - impossible to achieve unless you lean your torso right back and also put your feet up on the coffee table.

Manufacturers fake product shots all the time, but this iPad demo video is truly deceptive because it implies you can use the device in such a way that is physically impossible - unless the Reality Distortion Field is also a Gravity Distortion Field. Considering Apple has previously been slammed by the UK regulators for misleading iPhone advertising, I doubt you'll see this amazing levitating iPad scene when the television advertising campaign goes to air.

BACK TO HOME PAGE
Published in Seeking Nerdvana
Tagged under

More in this category: « New Aussie TiVo XL - an eXtra Large disappointment? Exploring Google Wave - how could it transform journalism and publishing? »
Share News tips for the iTWire Journalists? Your tip will be anonymous