Apple updated watchOS too, to 2.1 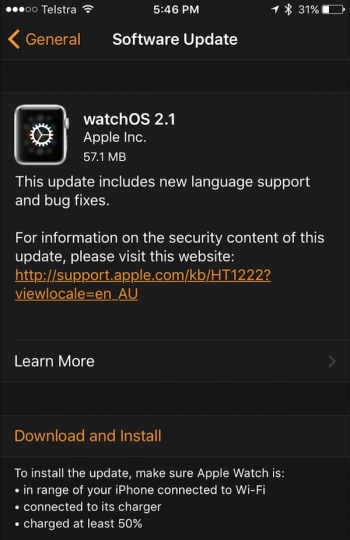 Last week Apple updated its various operating systems, and that included an update for its watchOS too.

It’s not just iPads, iPhones and Macs that received an update to a new OS version last week, but the Apple Watch, too, with watchOS updated to version 2.1

Over the weekend, I checked again, and presto - there was an update waiting for me to download.

For those with an Apple Watch already on watchOS 2.0, the update is 57.1 megabytes in size and downloads very quickly.

Once you have downloaded the update, you need to have your watch charged to at least 50%, and then once it is connected to its charger, the update will start installing.

I thought the update process would take a while but it only seemed to take a couple of minutes and then it was done.

Apple has listed here the improvements that watchOS 2.1 brings, and I’ve listed them below. The updates mainly focus around improvements for languages other than Enligh, but the last Five things listed below are actual bug fixes.

This update also patches a range of security issues, which can you read about from Apple here.

More in this category: « What smartwatches/fitness bands excited me in 2015 Muster your old mobiles for recycling, feed a family for Christmas »
Share News tips for the iTWire Journalists? Your tip will be anonymous