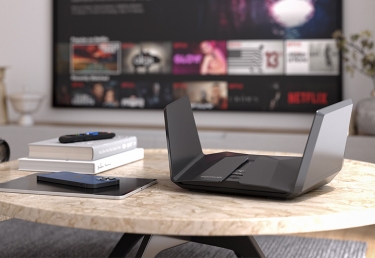 Every year, new phones, new CPUs, new everything arrives in the hope you’ll upgrade at some point, with WiFi getting a nice new upgrade to support ever faster speeds, with Netgear, Linksys, TP-Link, ASUS and others set to release 6E routers this year which uses the 6Ghz band that is "free of interference and congestion" - in 2021, at least!

Netgear will be the first to deliver a WiFi 6E router this year, due in the US in “the first quarter of 2021” at US $599, which hopefully means a sub-$1000 price in Australia when it launches here, and like its previous WiFi 6 router, the new Nighthawk RAXE500 Tri-Band WiFi 6E router with up to 10.8Gbps speeds still and impressively looks like an Imperial Tie-Fighter capable of blowing away slow wifi forever.

A couple of videos from Netgear are below with more info on WiFi 6E and the router itself, but the big difference with WiFi 6E routers is the support for the new 6Ghz band, with previous routers supporting 2.4Ghz and 5Ghz, both of which are filled with devices competing for space amongst all the WiFi devices out there.

Of course, you will need WiFi 6E capable devices to take advantage of connecting via the 6Ghz band, but with 6E routers on the way from Netgear and others, and eventually everyone that makes routers, it won’t be long before we start seeing new phones and other WiFi enabled devices that have 6E connections too, but they’ll also be expensive, at least to start with.

The company says 6E delivers a "new era of fast connectivity on the new 6Ghz band, free of interference and congestion”, which is important given that working, learning, and video streaming from home has placed greater demands on home WiFi networks.

Indeed, devices in our ultra-connected households have been in a constant contest for bandwidth on crowded WiFi networks, and as Netgear explains, “WiFi 6E resolves these congestion issues by adding previously unavailable 6GHz WiFi spectrum that can be used to broadcast WiFi signals and connect to more devices with faster speeds and reliability”.

As noted before, up until the introduction of WiFi 6E, WiFi routers were limited to the 2.4GHz and 5GHz bands. Now, the new third 6GHz band will dramatically increase the capacity of networks to support more devices.

Here are two videos about WiFi 6E and the new Nighthawk Router - the article continues below, please read on!

Phil Solis, research director at IDC said: “The proliferation of Wi-Fi over the last few decades first stressed the 2.4 GHz band and then eventually the 5 GHz band with Wi-Fi 4, 5, and 6.

“As regulatory bodies around the world open up the 6 GHz band, Wi-Fi 6E networks will provide enabled devices with the breathing room to use large channels even in dense and congested areas with higher average data rates and lower latency.”

Now it’s interesting to note that the Nighthawk RAXE500 router is also a CES 2021 Innovations Award Honoree, which is always a very nice honour to receive.

Netgear reminds us this new router “is designed to provide the fastest WiFi speed possible with higher-capacity, lower latency, and the latest WPA3 security.

“With the new 6GHz band, this Nighthawk performance router delivers the faster speeds, smoother streaming, less interference, and improved latency for devices and WiFi-hungry applications for an overall enhanced experience.”

“We are pleased to be recognized by the Consumer Technology Association for our commitment to this mission with the introduction of the industry’s first all-purpose WiFi 6E router. The Nighthawk RAXE500 Tri-band WiFi Router will capitalize on the available bandwidth afforded by the new 6Ghz channel, delivering an increase in speed and capacity that has never been experienced up until this moment.”

The Nighthawk RAXE500 includes a free 30-day trial of NETGEAR Armor to protect the connected home from online threats.

We’re told that “Armor’s multi-layered cybersecurity is built into the RAXE500 router to provide the peace of mind that you have the best-in-class anti-virus, anti-malware, and data protection for your smart devices, smartphones, and computers”.

The Nighthawk RAXE500 PDF brochure and spec sheet is here. 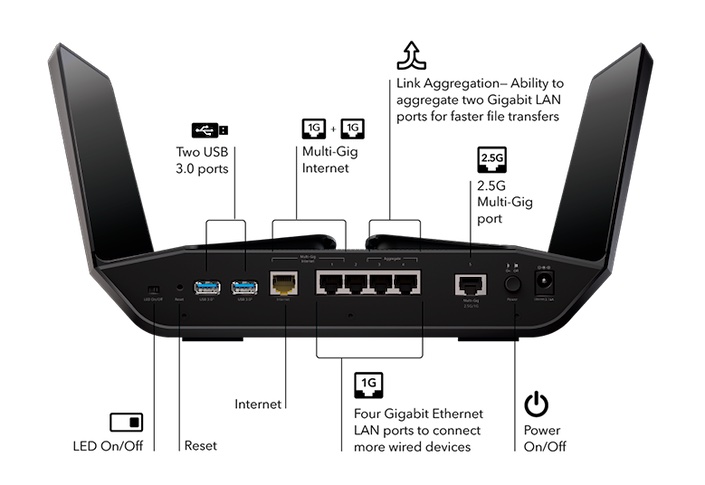 More in this category: « LG's Smart TVs will get Google's Stadia cloud gaming in late 2021 Cool things on display at CES 2021 »
Share News tips for the iTWire Journalists? Your tip will be anonymous