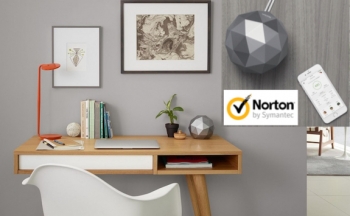 Dubbed as potentially "the most important piece of digital equipment in Australian homes in 2018", Symantec says its Core router is "the solution to help keep cyber criminals out of Australian homes".

A router that can secure all of the connected devices in your home is the new battleground for protection, as it is no longer simply your computer, smartphone and tablet that needs protection, but everything that has a wired or wireless connection to your Internet connection.

This includes IoT devices, and we've seen Trend Micro, a competitor to Symantec's Norton Core, come out with similar sounding protection as iTWire looked at in January 2017.

That said, Trend Micro's Home Network Security device works with existing routers, rather than replacing them entirely as Norton's Core does, with Norton explaining that a core feature of Core is that it is a vastly more security Wi-Fi router than the router you are already using, whether provided by your ISP or one you've purchased from elsewhere.

Indeed, Symantec explains it best itself, saying that Norton Core is in response "to the rapid uptake of Internet of Things devices in the home and the cybersecurity vulnerabilities they present" and is "a high-performance, high-speed Wi-Fi router that makes digital security the primary feature".

Emphasising this further is the statement that Norton Core is "built from the ground up with security in mind and leveraging Symantec’s decades of experience in cyber security" and "employs multiple layers of defence to help keep hackers out while simultaneously protecting users’ data and their connected devices on their home network".

The company explains that "Internet-connected households need a digital safety solution to protect their networks and the connected devices powering their homes. IoT devices are quickly becoming preferred targets of cyber criminals.

"Routers and devices with routing capabilities were the most targeted IoT devices, accounting for nearly half (47.1%) of the IoT attacks, according to the 2018 ISTR.

"Recently, the VPNFilter malware infected more than half a million routers in more than 50 countries allowing attackers to snoop on the user’s Web traffic, perform man-in-the-middle attacks, collect login credentials and other sensitive information from the user’s Wi-Fi network, and even brick the router rendering it useless."

Symantec also notes that VPNFilter malware is now targeting even more router brands, with a list on how to check if you're affected here being another reason why Norton suggests Core is a better way to provide home security by replacing your router with Norton's Core rather than adding protection to your existing router.

The company has also published more information on the VPNFilter Malware here, nothing that it is "New router malware with destructive dapabilities".

So, this is why Symantec developed Norton Core – it was "designed to defend against these cyber threats and the others targeting home networks", and since its release in the US in 2017, it has "blocked over 90 million threats".

“The router manages the Internet traffic going to and from all the devices. It may in fact be one of the most important pieces of digital equipment in your home, but it may also be the weakest link in your digital security chain. Norton Core is an investment for peace of mind when it comes to digital safety for the whole family.”

As Symantec explains, "Norton Core helps protects home networks — and the devices connected to it, including computers and mobile devices — from malware, viruses, hackers, and cyber criminals.

"The innovative router offers customisable parental controls to allow parents the flexibility to set parameters that work for their family. Daily screen time limits for each child, filters for accessible content, and an internet pause button are some of the features parents can use to support a harmonious household.

"Designed in the form of a geodesic dome and inspired by defence and weather radars deployed in the extreme reaches of the globe, Norton Core’s unique mathematical design encourages users to place it out in the open, as part of their home décor which adds to improved range and coverage".

Well, "unlike conventional routers, Norton Core was built specifically with security in mind to help protect connected homes. With deep packet inspection and intelligence from a global threat database, Norton Core can help fend off threats before they infiltrate a home network. Norton Core brings the benefit of speed, comprehensive Wi-Fi coverage and reliability along with these additional key product features":

What's the price and availability?

"Norton Core is exclusively available for purchase in Australia at Harvey Norman nationwide for A$399.

"Purchase of Norton Core, available in Granite Grey, comes bundled with a one-year subscription to Norton Core Security Plus, which covers your connected devices at home and up to 10 desktops, laptops and mobile devices."

As explained in my earlier article on the Norton Core router from Australia's CeBIT 2018 event in May, the cost after the first year to maintain the security of the Norton Core router and the 10 copies of Norton Security software is A$17.99 per month, which is A$215.88 per year, and as such is a great deal for modern households.

Norton Core has also received a stack of industry accolades and awards, which include:

More in this category: « VIDEO: Accessible packaging for the Xbox Adaptive Controller an easy open, move and play Belkin launches 10W BOOST↑UP Wireless Charging Stand and Pad in Australia »
Share News tips for the iTWire Journalists? Your tip will be anonymous