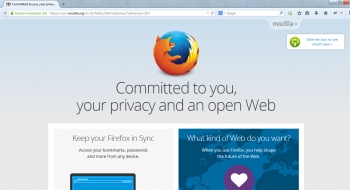 Mozilla has redesigned its popular Firefox browser, giving it a whole new look for Winter.

The not-for-profit foundation has released one of the most radical updates in the browser's history, Firefox 29, which boasts a streamlined interface and a new 'customize' tool, along with other features.

The browser update was released last week for Mac and PC, while the Android version is slowly being rolled out on Google Play.

The Google Chrome and Internet Explorer alternative now features rounded tabs, which will fade into the background when not in use, making it easier to focus on the content that is open.

Firefox's menu boasts one of the most significant changes however - as Mozilla explains on its blog the menu has been moved around and adjusted so that users can access add-ons, features, and services with fewer clicks.

"The menu includes a 'Customize' tool that transforms Firefox into a powerful customization mode where you can add or move any feature, service or add-on. This level of Firefox customization puts you in control of your Web experience and is unmatched by any other browser," Mozilla said in the blog post, here.

Certain features, particularly Firefox Sync, have been improved in a way that will allow people to use the browser on different devices in much the same way as Chrome.

It had previously been possible to use Sync to share browsing history and bookmarks across devices, but the setup was not simple. Users had to enter three different codes on each of their devices in order to sync them together.

Meanwhile a bit of controversy has erupted over Firefox's new tab page - various media outlets are reporting Mozilla has plans to sell sponsored tiles on the page.

Mozilla — which doesn’t always see eye-to-eye with advertisers — first introduced this program at an Interactive Advertising Bureau (IAB) meeting in February. Now, it’s starting to experiment with different layouts of its new new-tab page, according to Firefox's Johnathan Nightingale.

"We will experiment," Nightingale wrote.

"In the coming weeks, we’ll be landing tests on our pre-release channels to see whether we can make things like the new tab page more useful, particularly for fresh installs of Firefox, where we don’t yet have any recommendations to make from your history. We’ll test a mix of our own sites and other useful sites on the Web. We’ll mess with the layout.

What definitely won’t happen, according Nightingale, is Firefox turning “into a mess of logos sold to the highest bidder; without user control, without user benefit.”

Those sponsored tiles will typically stay around for the first 30 days after a user installs Firefox unless a user actively manages them.

Mozilla is still recovering from a worldwide outrage from pro-same sex equality activists which saw the organisation's CEO Brendan Eich step down after it was revealed he donated to the Proposition 8 'yes' campaign outlawing gay marriage in California.

More in this category: « European auction features early PCs and other IT equipment Parrot's Bebop drone is set to take off »
Share News tips for the iTWire Journalists? Your tip will be anonymous