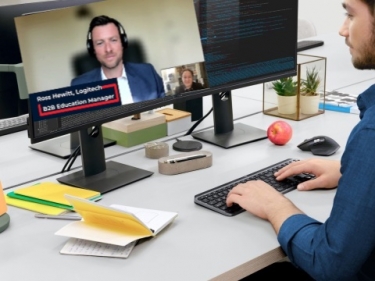 Like a bolt from the blue, lightning has struck the innovators at Logitech, whose new, high-performance, secure wireless Logi Bolt technology provides cross-platform compatibility to power a new product suite that will revolutionise enterprise IT.

"In addition to offering a secure connection, Logi Bolt powered USB receivers provide strong, drop-off free connection up to 10 meters, even in congested wireless environments. It also boasts on average up to eight times lower latency than others deployed in noisy enterprises."

Logitech Australia's B2B & Education Partner Manager, Ross Hewitt, joined us to explain the new technology in a video interview embedded immediately below, after which you'll find commentary from General Manager of B2B for Creativity and Productivity at Logitech, Joseph Mingori, followed by a summary of the topics I spoke about with Ross, and Logitech's FAQ on the technology:

General Manager of B2B for Creativity and Productivity at Logitech, Joseph Mingori said at its core, "Logi Bolt will not only support enterprises with addressing integration and security challenges, but it will also enhance overall employee experience."

Mingori added: “For decades, consumers have trusted Logitech to deliver products that help them create, communicate, work and learn at home and on-the-go. Now we look to expand that expertise to employers and offer a stellar employee experience as they evolve their requirements in a rapidly changing landscape.

“We have redefined our enterprise offering to support individual work setup solutions on a global scale while launching our new, wireless technology solution - Logi Bolt - enabling secure and robust connections to meet today’s evolving business needs. These offerings prioritise the needs of enterprise IT to keep their diverse workforces productive, collaborative and secure no matter where they work."

There's plenty more information below, but first, here's a summary of the topics I spoke about with Ross Hewitt:

Naturally, to coincide with the launch of Logi Bolt, the company has introduced a suite of five new devices that leverage the technology’s cross-platform compatibility. Among the new devices is the MX Keys for Business keyboard and the ergonomic K860 Split Keyboard for Business.

Logi Bolt works with operating systems and platforms, including but not limited to: Windows, macOS, iOS, iPadOS, Linux, Chrome OS and Android. Logitech says that "by providing reliable connections it allows IT managers to efficiently source, purchase and distribute without fearing compatibility or connectivity issues."

Logitech devices featuring Logi Bolt technology are coming soon and will be available to purchase through Logitech resellers across Australia, with more on Logitech for Business here.

The new devices are as follows, with RRP pricing yet to be released but which will be available soon.

In a world where remote and working is encouraged, there’s a rising risk in cyber security. Secure wireless mice and keyboards are essential to enable effective enterprise security safeguards.

How does Logi Bolt enable high performance and productivity?

The right work set up can make a world of difference to ergonomic comfort, productivity and performance. But, with employee needs varying by job, role, work location and personal preference, finding an enterprise solution that sets everyone up for success can be a minefield.

With Logitech’s diverse line-up of mice and keyboards for business, organisations can cater to diverse workforces with one secure, globally available and cross-platform-compatible standard.

Highly-specialised workers such as coders, creators, and analysts need highly-specialised work setups. Mice and keyboards in Logitech’s Master Series for Business are backed by decades of research and development to deliver an extra level of focus, precision and accuracy.

Further, logitech conducted an Ergonomic Lab Study with 23 participants in October 2019 and found that people are:

What are the key features IT managers need to know about?

Logi Bolt wireless mice and keyboards are ideal for environments where corporate policy does not permit use of BluetoothR connections. Though Logi Bolt is based on Bluetooth, it is an end-to-end closed system where a Logi Bolt receiver is emitting an encrypted signal that only connects with Logi Bolt products. So the Logi Bolt USB receiver can’t be paired with any non-Logi Bolt device. And because Logi Bolt works with most enterprise operating systems and is securely paired right of the box, it makes procurement and set up that much easier.

What is employee demand for an ergonomic keyboard and mouse?

Logitech conducted a proprietary, quantitative research project with decision makers and end users in 2019 and found that 9 out of 10 people who switch to an ergonomic keyboard or mouse never switch back to traditional models.

Further, in 2020 Logitech conducted another research project to gain insights into working from home practices. Key findings indicated that:

Notably, those who are new to working from home are 30% more likely to report pain/discomfort in their necks than those who worked from home prior to COVID-19.

This insight led to the development of the new Ergonomic Series with ERGO K860 Split Keyboard for Business and ERGO M575 for Business, both of which have been released with Logi Bolt.

Where can IT managers purchase Logi Bolt products from in Australia?

Logi Bolt products can be purchased from your preferred Logitech reseller in Australia.