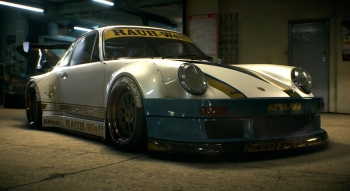 Need For Speed hits the road again - but this Speed feels rushed.

The Need For Speed franchise has been in and around the video game scene on various platforms and computers for many decades now.

This is the first game to just be called Need For Speed (even the original game in 1994 The Need For Speed contained the definite article) and this is an attempt to reboot a series that perhaps had lost its way a little.

Having said that, we really liked the last outing of Need For Speed: Rivals in 2013, particularly the combination of taking on real-world friends as virtual-world rivals whilst going up against the well-equipped cops.

Much of that thrill however goes by the wayside here though.

To begin with you really need to be a fan of FMV (Full Motion Video) in your games to enjoy Need For Speed. Your character is introduced to a number of pretty young overly-hyped things looking for the next speed rush.

The so-called intertwined stories are confusing and over-acted but light in delivery, there is only a very slightly implied dark side here despite all the cop-baiting talk and aimlessness of a culture devoted to illegal street racing. You may find yourself skipping through the cut scenes because the sequence these scenes play out is determined by which events you choose in the open world. This just adds to the confusion of the so-called story being delivered.

All of that is peripheral to the car management and racing itself.

Tinkering with your garaged cars is a step up from the previous game and performed via a simple to use interface with large graphics for parts purchase and sliders for the tuning options.

Here is a hint, this game more than many past rewards drift driving. Make sure you get in and move that drift slider (and therefore the underlying car set up) as soon as you purchase your next dream vehicle.

Once out on the slick rain strewn streets of night time Ventura Bay it is time to fill that speed need.

Graphically the game is saturated with an orange hue as if the street lamps are sodium-vapour. All game play is at night which is a shame if you are trying to show off the wicked vinyls and metallic fleck paint design you created.

Also there was not really a camera view we were completely comfortable with. Until you get one of the expensive low-riding supercars, the default view just does not have the elevation to comfortable see over your car to the oncoming road. And, at the speeds travelled, neither the bumper nor bonnet cams give the reaction time line-of-sight any normal human can deal with. There is no cockpit view.

The fictional Ventura Bay map is not huge by todays gaming standards, but it has enough variety to accommodate the five racing approaches championed by the game. “Speed” is maximised on the long straights of the overhead freeways, “Style” can be adopted through drifting the hairpin curves of the mountainous area.

Increase your “Crew” rating by driving in a group (either AI or your own friends as a crew) or you can build your “Outlaw” rating through antisocial driving, crashing and bashing through tight urban streets or running afoul of the law (more on this shortly).

Finally the “Build” skills are exploited across the entire game, showing how well you tweaked the car construction.

Everything adds to the players Reputation, unlocking new, more powerful parts to purchase for your ride.

But if there has been one thing pretty consistent in the Need For Speed games of the past, it’s the cops, and in this game they are pretty lame.

Sure bumping into them, or speeding past them will rile them and start a chase, but for the majority of the game cops are ludicrously easy to evade. Unlike Rivals where spike strips, road-blocks and helicopters would appear to escalate the chase, it takes a great deal of time and baiting for the Bears here to be poked into anger.

Playing online, which is the default, means other players join your version of the Ventura Bay area, but really they are going about their own business for the most part. Challenges can be issued and racing can be had, but for the most part Need For Speed is a solo experience from one mission race to the next. Annoyingly the only “fast travel” option is back to the garage.

Need For Speed is a somewhat disappointing reboot of the series, and definitely a disappointing follow-up to Rivals. The racing suffers from awful rubberbanding whether you are dominating out front or hopelessly stuck behind a railing you just crashed into. In either situation you will find yourself amongst AI driven cars soon afterwards.

There is a great deal that harkens back to the original game, and Drifting and Gymkahna events are actually a good deal of fun, but there are better racing games out there today, and as far as a Need For Speed branded title goes, pick up NFS: Rivals before this one.

More in this category: « Quick Review Hits: Blood Bowl II and The Talos Principle Unfinished Game Review: Fallout 4 »
Share News tips for the iTWire Journalists? Your tip will be anonymous