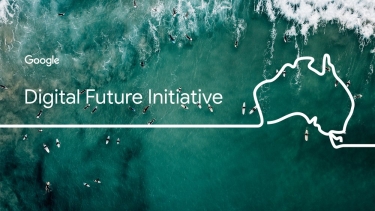 The company explained the initiative builds on its work in Australia over the last two decades by investing in:

Mel Silva, Google Australia MD, said the Digital Future Initiative was about helping accelerate our country’s progress to becoming a leading digital economy, and added: "The Digital Future Initiative is about bringing significant technology resources and capabilities to Australia, investing in the infrastructure that benefits people and businesses, and helping the best talent thrive here.

“A strong digital future creates opportunities, improves the everyday and enables the extraordinary - and we’d love to help Australia and Australians make the most of the opportunity and build for tomorrow,” added Silva.

Google points to analysis by economist Henry Ergas AO and Green Square Associates which has found that Google’s Digital Future Initiative "will support 6,529 new direct jobs and 28,057 total jobs across Australia and deliver $1.259 billion in direct investment and $6.716 billion in total economic impact."

Here's what Google Australia says about the project:

The foundations of the digital economy

Along with the Digital Future Initiative, Google has also officially launched its expanded Sydney office, in Pyrmont - Google Australia’s third Sydney office. We're told "the expansion has seen the creation of 550 new desks and an auditorium and space for national and international industry events."

The company notes that as it approaches its 20th year in Australia and a staff of almost 2,000 across the country, it has "also submitted a development application for a fourth Sydney office, which is expected to be completed in early 2024."

Sundar Pichai - CEO of Google and Alphabet said: "Australia can help lead the world’s next wave of innovation, harnessing technology to improve lives, create jobs, and make progress. To help, today we’re proud to make a five year, $1 billion commitment to launch the Digital Future Initiative to bring the benefits of technology to more Australians.”

Mel Silva - Managing Director, Google Australia & New Zealand said: "Since we started our first office here in a Sydney lounge room in 2002, Australian talent and creativity has been central to Google’s success, with products like Google Maps born right here in Australia. Today, with the Digital Future Initiative, we're making our largest single investment ever in Australia, aiming to strengthen local capabilities and help build Australia's digital economy for the future."

Alister Dias - Vice President, Google Cloud, Australia & New Zealand said: "Building Australia’s digital future starts with having the right foundation for growth. From new cloud regions here in Australia to high-bandwidth and connectivity, every aspect of our infrastructure investment is a strong reflection of our commitment to help businesses scale, innovate faster and bring their ideas to life.”

Dr Larry Marshall - Chief Executive, CSIRO said: “CSIRO solves Australia’s greatest challenges through innovative science and technology, but our partnerships with industry are what makes those solutions real – because when industry innovates Australia grows. CSIRO’s science makes life better for every Australian, and when amplified by Google’s Technology it will catalyse collaborative projects across our entire national innovation system, driving opportunity for businesses of all sizes across every market.”

Here is the media Q&A session: