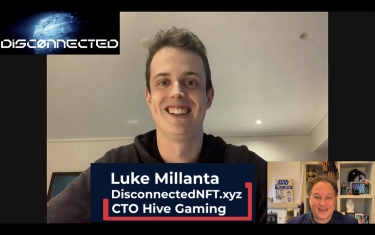 In a world where 37% of humanity has never used the Internet, a new NFT project by Guinness World Record holder Luke Millanta is raising awareness of this literal disconnect through an NFT artwork in Melbourne, Canberra and Sydney.

While most of us in the west live in a golden age of connectivity, over one third of the world is still connected, according to United Nations datasets to track global Internet connectivity rates.

To bring this to the world’s attention, the DisconnectedNFT project was born, and it represents a one-of-one, dynamic, evolving NFT artwork leveraging the aforementioned UN datasets of global Internet connectivity, with the DisconnectedNFT to evolve over time, continuing to grow as more and more people are connected to the internet.

Supported by the Royal Art Society of New South Wales, Disconnected’s creator, Luke Millanta, and his hardworking team, have created a pop-up digital installation that will appear in three Australian cities.

Here’s my video interview with Luke Millanta, filmed on Thursday 23 June, 2022, on the eve of the project’s unveiling in Federation Square. There’s plenty more info below, so please watch, and read on!

With the lack of connectivity deemed as a Human Rights Issue by the UN in 2016, DisconnectedNT’s pop-up digital installation aims to shed light on the fact that 37% of the world’s population have never used the internet, cutting them off from key medical information, education and social connectivity.

In a recent UNICEF report, Henrietta Fore, UNICEF Executive Director stated: “Lack of connectivity doesn’t just limit children and young people’s ability to connect online. It prevents them from competing in the modern economy. It isolates them from the world.”

Millanta says Disconnected has been created not only to raise awareness but to allow the Australian public to pause and reflect on the privilege that is virtual connectivity. After years of physical separation due to Covid-19, the internet has never been more important in keeping people Connected.

Millanta added: “I thought about how sadly poetic it would be to build a dynamic NFT, hosted on and powered by the internet, that’s purpose was to raise awareness of the lack of internet connectivity in developing nations.”

This is not Millanta’s first foray into the art world. He was invited to join the Royal Art Society of New South Wales in 2019 after submitting a number of his paintings for consideration. His Guinness World Record is for having the world’s largest following on the game publishing platform, Steam, where he publishes custom game content to an audience of millions.

iTWire last spoke to Millanta in April 2021, when he launched AlerTOR, the Dark Web tracking tool, and before that, we profiled Millanta’s successes as Guinness World Record holder and sucessful businessman.

More in this category: « Australians want more government digital services and are comfortable with personalised artificial intelligence: survey
Share News tips for the iTWire Journalists? Your tip will be anonymous