Shouldn’t Microsoft stand ON Surface rather than behind it? 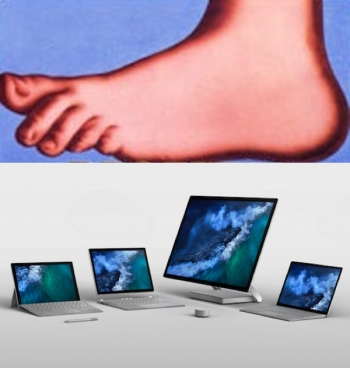 The news comes due to Consumer Reports, the consumer advocacy organisation in the US, removing its “recommended” designation from four Microsoft Surface devices “because of poor reliability compared to most other brands,” as iTWire colleague Sam Varghese reported.

The issue was also widely reported by the tech press, and clearly, is a massive embarrassment for Microsoft given how much time, effort, money, technology and brainpower has gone into designing and manufacturing, via its partners, Surface devices over the past few years.

This is especially so, considering Consumer Reports is the platinum standard where it comes to product reliability reports – it’s like Australia’s consumer advocate CHOICE, but on legal steroids.

Clearly, the embarrassment is brutal for Microsoft, with its chief Surface spruiker, Panos Panay, forced to issue an official blog post entitled “We stand behind Surface.”

In the blog post, Panay states that “the Surface Team’s mission is and has always been to make devices that deliver great experiences to our customers and fans. It’s the motivation for everything we do, and we are proud of the Surface devices we have built,” while expressing disappointment over the Consuemr Reports survey.

Panos says: “This is why today’s Consumer Reports survey is disappointing. While we respect Consumer Reports, we disagree with their findings. Surface has had quite a journey over the last few years, and we’ve learned a lot.

“In the Surface team we track quality constantly, using metrics that include failure and return rates – both our predicted 1-2-year failure and actual return rates for Surface Pro 4 and Surface Book are significantly lower than 25%. Additionally, we track other indicators of quality such as incidents per unit (IPU), which have improved from generation to generation and are now at record lows of well below 1%.

“Surface also ranks highly in customer satisfaction. 98% of Surface Pro 4 users and Surface Book users say they are satisfied with their device, and our Surface Laptop and new Surface Pro continue to get rave reviews.”

Naturally, Panos says he is proud of Surface, and of course, he would say that - he is the executive that has been the driving force behind making sure Surface does far more that just scratch itself, but instead, embeds itself deeply into the zeitgeist, and into the hands, minds and wallets of consumers and businesses across the planet.

Whether that has truly happened or not is not in question - Surface is well known as Microsoft’s own brand. Despite issues with football team coaches getting annoyed with the Surface, or sports TV people calling them iPads, Surface surfaced as Microsoft’s bigger and most important brand in decades, and the one atop all of its other products and services are available on – even Xbox games!

So, what of my own personal experience with Surface? Well, I have a Surface Pro 3, and in the time I’ve had it, I too have had problems.

I openly admit to using my MacBook 99.9% of the time as my daily driver, and have done so many times in the past, but given the amount of tech support I do helping Windows users, it’s very handy to have a native Windows device rather than relying on a virtual machine, at least for some of the time.

Also I was a huge supporter of the Tablet PC style of computer from the start, years before iPads arrived, so while it is great to see Microsoft continuing to refine tablets, it’s such a shame the Windows XP Tablet PC that Bill Gates introduced in the early 2000’s wasn’t the original Surface Pro - the technology simply wasn’t available in the XP era.

So, with a Mac my main computer, that means my usage of my SP3 has been dramatically lower than that of the average Surface owner, and yet, my Surface pen stopped working, and my power supply failed, too.

However, I did what I’d do with an Apple product – I went to the company store, but in this case, the Microsoft Store in Pitt St Mall.

I can’t remember if I made an appointment or simply turned up unannounced (as this happened about a year ago and I don’t remember), but I do remember being given a repair slot that would open up in about 20 minutes, and was ushered upstairs to wait for the equivalent of an Apple "Genius Bar" person to help.

Help they did, noting the power supply was flaky (as it worked at first, but then clearly wasn’t charging, which was the issue) and also noted that my Surface pen had also died.

So, without fuss, both were replaced, and about 10 or 15 minutes after my slot with the Microsoft tech started, I was out the door with working equipment.

Both the replaced power supply and replaced Surface Pen continue working beautifully to this day.

That said, I do have some anecdotes from a couple of other Surface users. One has a Surface Pro 4, and a Surface Dock.

The Surface Pro 4 has always worked smoothly, but the dock has failed on two different occasions. Each time, the dock was replaced by the Microsoft Store in Pitt St without issue, but as it is a simple part that never moves and just has cords plugged into it, you do have to wonder what it is inside the dock that is burning out or whatever it is that causes it to stop working.

This user is worried the dock will fail a third time, because history has a habit of repeating, and hopes it doesn’t happen again.

Another friend also has an SP4 and his just stopped working one day, with no warning, out of the blue.

You sure do appreciate having back-ups, whether local or cloud, whether via services like Dropbox with its partial backup capabilities, or whether by using top-notch backup software like Acronis True Image 2017, or a combination of them all to be safest.

Anyway, we naturally tried Microsoft’s recovery OS file for Surface PCs that needs a serial number typed in to download, that could then be loaded onto a USB stick to re-image the SP4 with, but that didn’t work – we just saw an error message after a while instead.

So, he needed to take it to the Microsoft Store to have them look at it, and they were able to re-image the device and have it ready the next day, even though we tried to do the same thing.

The re-imaging done by Microsoft Store tech worked, and that SP4 has worked fine ever since.

This handful of examples including my own is but anecdotal, and hardly a representative sample of Surface device owners, but even so, it does tell a story.

Whether that story ends with Microsoft standing ON its Surfaces as much as it stands BEHIND them isn’t obviously the end of the story either, but it’s where this article will conclude, in the hope that everyone, all the princes and princesses, and all the King’s men and women and their Surfaces live happily ever after.

And, if you do experience Surface issues, please see your tech health professional at a Microsoft Store or an authorised service centre as soon as possible.

Not portrayed by a real dentist. Your mileage may vary. Lithium-ion batteries included where devices have batteries, unless stated otherwise. Product may vary by country. Shipped by weight not volume. May the Force be with you, to infinity and beyond. Compatible with Windows. 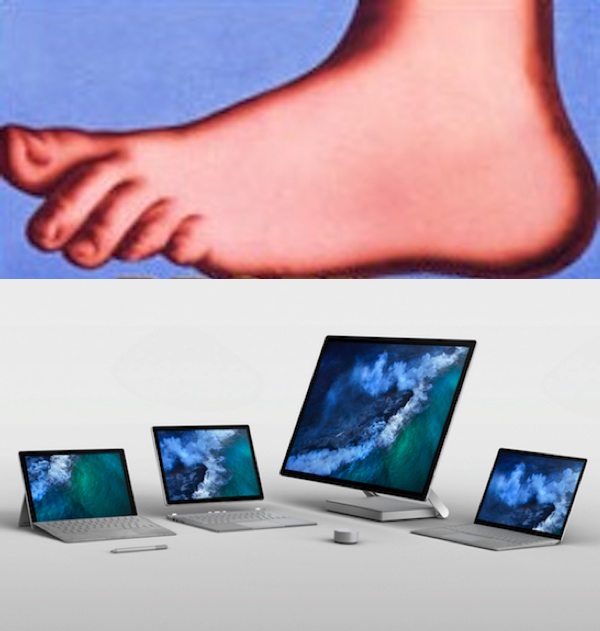 More in this category: « Origin’s trial of next-gen home energy solution – will it cut bills? OMGoogle: Pixel 2 to be a success or an XL 2 giant mess? »
Share News tips for the iTWire Journalists? Your tip will be anonymous