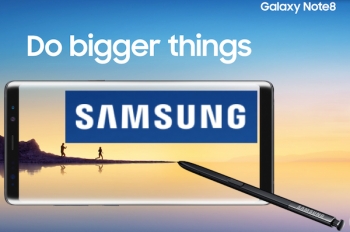 I’ve just finished watching the New York launch of the Galaxy Note8 via live YouTube stream, and here are my thoughts.

Samsung has just launched its most impressive smartphone ever, filled with virtually every feature imaginable.

I wrote up the Note8 media release that was sent to me and other journalists around the world a few hours ago, and you can read all the features, benefits and specs here.

Here’s the Samsung Galaxy Note8 presentation that you can watch for yourself, it’s definitely worth watching for the full effect.

My thoughts continue below.

Sadly, no Samsung phone or TV can replicate that massive experience as yet, because those kinds of displays are designed for huge auditoriums and mass presentations, but hey, until we get holographic displays or AR glasses, a 6.3-inch screen in your hand will just have to do the job for the time being.

The screen itself is an evolution of the existing Infinity Display seen on the S8 and S8+, but it is a little larger, while still easily fitting in your hand – or so the Samsung presenters reassured us was the case.

The S Pen has been refined, with a thinner tip and more pressure sensitivity, and a promise that despite having a “brain” within, it needs no batteries or charging to work.

You can use the S Pen to send drawings when using messaging apps that support animated GIFs, and the screen-off memo taking feature has been improved too.

Harman headphones are included in the box, and as they’re wired, Samsung’s presenter noted the Note8 also had a headphone port, unlike the iPhone 7, 7 Plus and various competing Android smartphones out there.

The multi-tasking feature can be enhanced by allowing a button on the “Edge screen” to automatically bring up your preferred two apps, called “App Pair” such as a GPS app and a streaming app, for example.

Whether you can set up multiple such pairings with multi App Pairs isn’t clear – hopefully this is the case.

We got to see the camera in action, with the iPhone 7 Plus particularly badly represented in comparison to the Note 8’s cameras, which also boast 2x optical zoom to match that of the iPhone 7 Plus (a year later!)

To me, it looked like the iPhone 7 Plus was shown in the worst possible light, such as zooming in a lot while taking a video, while the Note8 showed the same video but nice and stable.

This is due to OIS or optical image stabilisation being available on both of the Note8’s cameras, and I certainly look forward to testing this out for myself in the not-too-distant future.

Also shown was the ability to take two photos at once, one a close up and the other a full frame photo. You could even adjust the amount of blur taken in portrait photos after having taken a photo.

We got to see more of Samsung DeX in action – a feature I wish Apple would copy on the iPhone and even iPad, allowing me, should I so wish, to turn a phone into a PC-like experience as desired.

I know, I know, iPhones are supposed to be all about touch, and doing so would make me wonder if I still needed my beloved MacBook Pro, but Samsung’s implementation sure looked impressive and it just makes you wonder if or when Apple will respond to that one, should it ever choose to.

Wireless charging of course was still available, but there’s no long distance wireless charging as yet – you still need to place your Note 8 onto a charging pad of some kind, which merely saves you the hassle of actually plugging your phone in.

This kind of wireless charging is akin to needing to place your phone or tablet onto a Wi-Fi router to get wireless data – I mean, imagine if you had to do that! It would not qualify as wireless, as such, because it would be ridiculous.

There is speculation Apple might launch this new kind of long distance wireless charging with its new iPhones due to launch next month, but who knows – it might be something we won’t see for a year or two yet.

Hopefully we get it this decade.

We also got to see a demo of Bixby and how it could perform multiple actions with one voice command, such as “food photo”, which took a photo of a plate of food, and then automatically added it to the food folder in the photos app.

Another was saying “good night”, which put the phone in do not disturb mode, set the alarm for 6am, and turned on the blue light filter.

Many more such voice commands are possible, and customisable. Heck, it makes me wonder whether I can create multiple “App Pair” voice commands so a command can launch two apps of my choice – we’ll just have to wait and see.

Look, the best thing to do is to watch the presentation. Samsung made to sure reflect upon and deal with the Note7 debacle upfront, and thanked its loyal fans for sticking with the company.

We got to suffer through Samsung’s president of Mobile Communications Business, D.J. Koh’s thick and heavy Korean accent, but nevertheless, he did his level best to enunciate as clearly as he could, with all subsequent presenters having clearly and easily understandable native English speakers.

Of course, if I were to give a presentation in Korean to a global audience, I’d completely fail and would certainly sound atrocious, so in noting Koh’s accent, he did the best job he could.

Maybe a future Samsung Galaxy Note will be able to take what Koh says in real time, and morph his voice into the most perfect English accent you will ever have heard, but we might have to wait for Bixby 5.0 and the Galaxy Note 15 or something like that first.

Also, while Samsung can surely put on incredibly advanced presentations, they still lack that “reality field distortion” feeling that you still get with Apple presentations.

I’m sure people will dispute that, and hey, it’s just my subjective feeling, but while the presentation truly was very impressive, and that on-stage display something from the future brought into the present, Apple still has a stranglehold on RDF, or at least, in my opinion.

So with the Note8 available for pre-order from tomorrow in Australia, 25 August, and on sale from 22 September for $1499, which is for the 64GB version (meaning the 128GB and 256GB versions will be even more expensive), Samsung will undoubtedly enjoy a massive boost in sales from Note fans who have been patiently waiting for this new model to arrive.

It will be a very strong contender against anything Apple launches this year, and naturally, increases the pressure for Apple’s launches to be its most spectacular yet, not that Apple wouldn’t have already been planning this no matter what Samsung would or wouldn’t have launched.

The Note8 has arrived at long last, and for many after nearly a year-long wait since the Note7 was recalled out from under them.

The only thing that should explode this time is pre-orders and sales, even as Apple prepares to break all sales records again with its 2017 range of iPhones.

The Note8 will be a great buffer, and looks set to have the opposite reaction from the public that was had for the much maligned Windows 8, even as Samsung looks to outdo the need for PCs with its DeX device offering a PC-like experience.

At the time of publication, only Amaysim and Vodafone have announced deals for the Note 8, with Vodafone even going as far as offering trade-in credit offers, so more detail on future offers from other telcos as they come through.

All the specs on the Note 8 in my earlier article here.

All the other info you could possibly want is available at Samsung’s Galaxy site here.