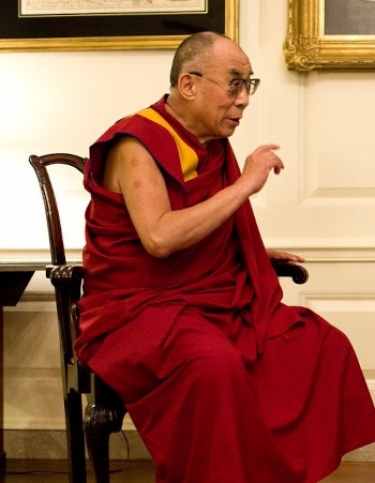 The Tibetan spiritual leader, the Dalai Lama. Image by Welcome to all and thank you for your visit ! ツ from Pixabay

Protesters have rallied in numbers outside the Apple Store in Washington DC, demanding that the company take steps to protect free speech and human rights.

The protesters, who included Tibetans and Uighurs — Muslims from China's Xinjiang Province who claim they are garrisoned in areas similar to concentration camps and not allowed free movement — wore face masks with an Apple logo which had been changed to resemble the logo of the Chinese Communist Party.

The protest follows an appearance by Apple chief executive Tim Cook before a Congressional panel on Wednesday, and ahead of the announcement of the company's third-quarter results.

The protesters maintained silence to show that that they were being silenced by Apple's censorship in China.

The protest was organised by activist group SumOfUs and the group Students for a Free Tibet. China invaded Tibet in 1959 and annexed the region, leaving the domestic populace to flee to India and seek refuge there. The Tibetan spiritual leader, the Dalai Lama, was among those who fled and now lives in India. 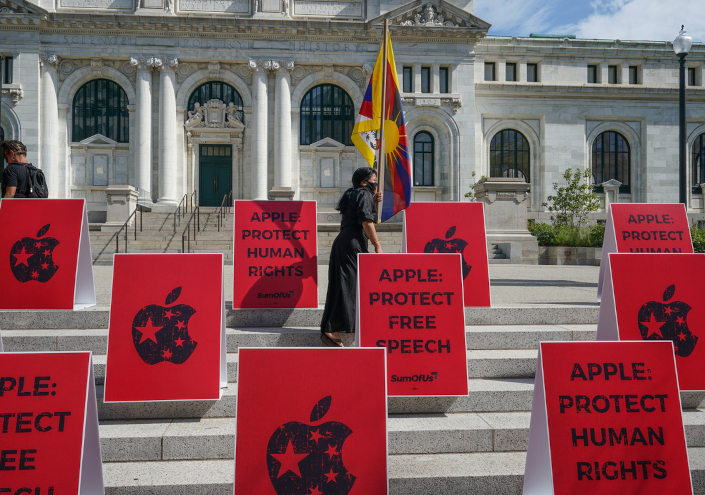 Tibetan activist Sonam takes part in a protest outside the Apple Store on K Street in Washington DC on 30 July. Photo: Getty Images

Many Tibetans live in settlements in Dharamsala in north India and in Karnataka (Odeyarpalaya and Bylakuppe) in the south.

A statement from the protesters claimed Apple had deleted over 1000 virtual private network apps from its China App Store at the request of the Chinese Communist Party in recent years, leaving Tibetans, Uighurs, citizens of Hong Kong and other human rights defenders unable to protect themselves from government surveillance and repression.

The campaigners expressed their solidarity with the people of Hong Kong as what they claim is a draconian National Security Law has been made law.

SumOfUs campaigns manager Sondhya Gupta said: "In opening a store in the Carnegie Library, Apple has made quite a statement. However, far from securing freedom of expression and access to information for all its users, it is removing news, podcast and VPN apps at the behest of the government of China. And that government is so emboldened by years of coddling by corporations like Apple, it is expanding its unprecedented censorship machine and actually removing books from libraries in Hong Kong." 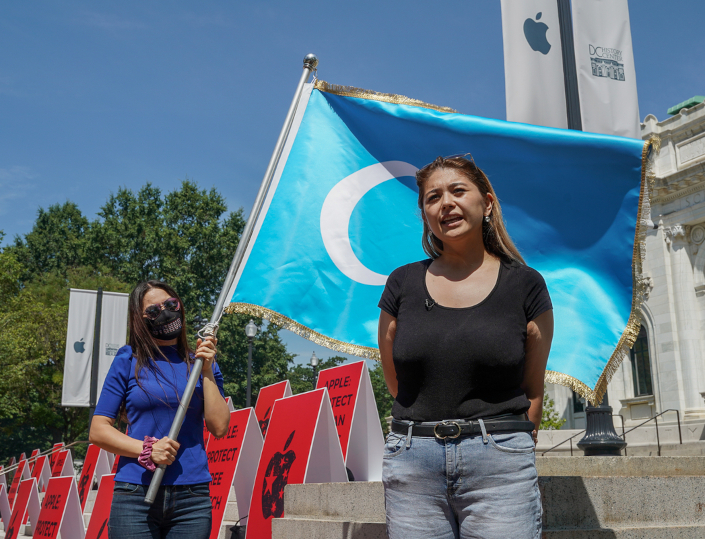 Activist Irade Kashgary from the Uighur American Association speaks to journalists during the protest. It was organised to urge Apple to take action to protect human rights. Photo: Getty Images

Pema Doma, campaign director of Students for a Free Tibet, said: "As the second most valuable company in the world, Apple is undeniably a leader in establishing global norms around technology and innovation. Apple's actions today will affect the privacy and digital security of billions for generations to come, especially in places like Tibet that are ruled by authoritarian regimes.

"If Apple wants to be recognised as a responsible global leader, it needs to start respecting the rights of all its consumers and stop kowtowing to dictators."

Irade Kashgary from the Uighur American Association, who attended the protest, said: "Companies like Apple can't continue to claim to the American public and Congress that they support freedom and privacy, whilst at the same time enabling the Chinese Communist Party's surveillance and oppression.

"We ask that everyone speak up against companies that suppress freedom of expression in China. As we stand here beside allies who have also faced immense persecution at the hands of the CCP, we trust that our voices are getting stronger and louder, as we continue to work together so that censorship and oppression will never be tolerated in China or internationally."

More in this category: « No software to let Muslims perform virtual Haj pilgrimage Vivaldi offers ad tracking and blocking in new Android version »
Share News tips for the iTWire Journalists? Your tip will be anonymous