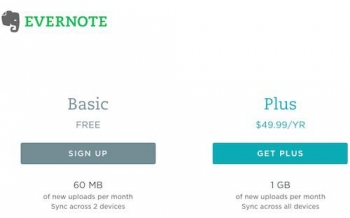 Evernote is a popular service for capturing notes and documents, making them available across a user's devices, and sharing them with other people.

Like many online services, it has operated on the freemium model: new users were tempted into Evernote with the free (basic) tier that limited uploads to 60MB a month, with the option to pay to upload more and gain access to additional features (the plus and premium tiers).

But the company has announced that "in the coming weeks, Evernote Basic accounts will be limited to two devices, such as a computer and phone, two computers, or a phone and a tablet".

Users are being notified individually, and given at least 30 days notice of the change.

The objective appears to be to convert free users into paying customers, or to encourage them to abandon Evernote, thereby reducing the company's costs.

Anecdotally, the size of Evernote's user community seems to have been driven by word of mouth, combined with the availability of a free tier that allowed people to access a modest amount of information from their phone, tablet and computer; phone, home computer and office computer; or other multiple-device combinations.

The two-device limit has understandably not been well received if the Evernote forum is anything to go by, with a significant number of users saying they have switched or will be switching to Microsoft's OneNote which is free to use (it stores the data in OneDrive which offers 15GB of free storage). OneNote apps are available for Windows, OS X, iOS, Android and others, and Microsoft provides a Windows-based program to import from Evernote to OneNote.

As 'lucac81' observed, "The device limit encourages people to leave, not to pay for premium."

'crazylegsmurphy' expressed it this way: "Evernote is kind of like that friend that you don't really want to be friends with, but you keep inviting them over because you hope they'll someday just not be a jerk... one day, your ridiculous business decisions are going to push me to the point where it just isn't worth the effort to play your little games."

The question is whether those basic users are just a drain on Evernote's resources, or the paying customers of the future. Also, how many of them have served as unofficial evangelists, attracting other users who became subscribers?

In addition, Evernote has increased the annual subscription for the plus and premium tiers by around 40% to $49.99 (US$34.99) and $89.99 (US$69.99) respectively. These prices apparently apply to new subscribers: according to the company "Not everyone will be affected by a price change. If you are affected by a price change, you will be notified of the details by email in the next few weeks."