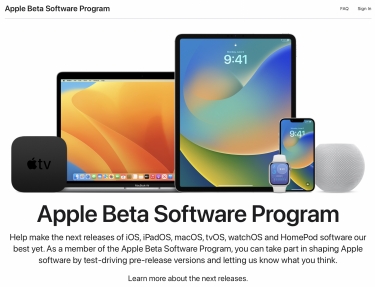 While the macOS Ventura public beta isn't out yet, four public betas are, and the comments about battery life, overheating, whether particular banking or other apps work or not are flying thick and fast at the iOS Beta forum at Reddit and elsewhere on the Internet.

While I tried out the first developer beta of iOS 16 on one of my iPhones, and installed Dev beta 3 (DB3) on another, I'm still holding out on installing the Public Beta 1 or PB1 on my daily driver iPhone 13 Pro Max - or at least, as yet.

Most people who comment at Reddit seem quite happy, with bug reports relatively minimal, although reports of phones getting hot, bugs with Apple Music or CarPlay and elsewhere are holding me back - again, for now.

While I did experience some bugs in previous beta cycles, one of which was the very annoying bug which caused the spotlight search on iOS to not display any results - something fixed in a subsequent beta release to much relief to all - I simply got around it by moving all of my most used apps to the first page, rather than lazily relying on spotlight search to do the job for me.

iOS also now has the App Library which shows results in alphabetical order, which wasn't available in whatever beta cycle that was, three or four years ago, so even if this issue were to pop up again, there are always workarounds.

Ultimately, I'm likely to give in to the desire to be on the beta before too long, although I will try to hold out until at least PB2 on my daily driver, and experiment with PB1 on a non-daily driver iPhone in my possession.

I haven't updated an iPad to the public beta yet either, but will also do so in due course, and just put up with any bugs in the meantime.

So, how do you get enrolled yourself into the official new public betas?

MacRumors has a great guide for iOS 16 and iPadOS 16, and as always, they strongly recommend you make a backup to your computer first, because it is possible to downgrade back to iOS 15.5 if you want to.

That said, you can't downgrade an Apple Watch from watchOS 9 back to watchOS 8 without taking your Apple Watch to an Apple Store and getting them to do it for you - and it isn't an instant process either, with reports saying it will either have to be swapped or sent back to you.

You can, however, use the existing watchOS 8 with iOS 16 PB1, but if you're already throwing your hat into the ring of the beta gods arena, such things are unlikely to be of major concern to you and you'll just ride out whatever the bugs are that get fixed with each new release until the software goes gold and is officially released, presumably sometime in late September or early October.

As always, be careful. If you're not a seasoned user and don't want to experience bugs, don't tempt fate. People who absolutely rely on their devices as daily drivers shouldn't tempt fate either.

But if you're adventurous, brave, reckless, curious or just want to see what all this beta fuss is all about, give it a go - and of course if you have non-maily drivers spare that you can try this out on first, do that.

You can also always jump on the beta bandwagon in a few weeks' time, or just wait it out until the final releases. There are bound to be bugs then too - great advice is always to wait for the .1 version after any new release, but with that likely to come in November, you will be in for a very long wait.

In the meantime, those who love betas and especially public betas are now having a lot of fun, and sharing their experiences at Reddit and elsewhere, so do some reading to see what others and experiencing, and when you're ready, the betas beckon!

More in this category: « Amazon Australia's Prime Day shopping event now live, are you primed for bargains? Reddit's Australian presence turns one, launches campaign to 'find your people' »
Share News tips for the iTWire Journalists? Your tip will be anonymous