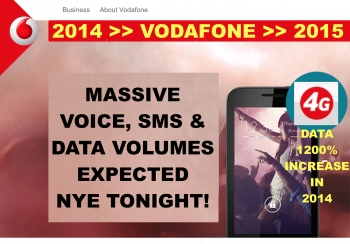 It’s Vodafone’s turn for a massive NYE night, with 11 million SMS to be delivered, 4.5 million voice calls to come and lots of extra staff!

It’s doing all this ’to ensure its customers around Australia are able to have a trouble-free evening contacting friends and family during the celebration.’

If all goes as planned, the V in Vodafone will stand for Victory, as it will have facilitated over 4.5 million phone calls between 10pm tonight and 2am tomorrow morning, New Year’s Day, a 70% increase in data usage and more than 11 million SMS messages - a 10% increase on last year’s SMS tally.

The number of MMS expected was not specified.

The extra staff will also include ‘a special team of engineers’ who will be ‘closely monitoring all key sites to make sure call, text and data services operate normally’.

Vodka will also have technicians ‘on site at key CBD locations around the country.’

So, what about that network capacity boost? It’s not the first time a telco has done something like this on New Year’s Eve or at various major special events, and it clearly won’t be the last.

To ensure its customers don’t have a cow through bad service, Vodafone is deploying COWs - or special mobile cell sites called ‘Cells on Whees’.

The company is doing this for Sydney’s Harbour tonight and at several major events, which is sure to keep calls and data… ‘mooving’ along nicely through the network.

Vodafone CTO, Benoit Hanssen, who we presume is an adroit, hands-on guy, said: “New Years Eve is about having fun and sharing the good times and making memories with your mates and family.

"Our job is to make sure our customers can call, text, MMS, Snapchat, upload photos on Facebook and Instagram - or whatever they usually do with their mobile phone or device - during this celebration. We're there to help them share the moment."

Then there’s Vodafone’s SON, which we will avoid writing any sonnets about.

Vodafone deployed a new ‘Self Organising Network’ solution for its 3G network in November, which the company says ‘has already improved mobile phone call reliability during high usage periods.’

Hanssen said that ”The SON deployment provides better call success rates, faster connections and consistent data downloads for our customers during peak periods such as New Year's Eve,” while Vodafone noted all of its preparations for tonight are additional to the benefits its beloved SON is already delivering.

Hanssen concluded by stating that “As Australia's love affair with smartphones continues to blossom, there's been a corresponding growth in data usage and the increased consumption figures are impressive to say the least, especially on 4G,” with Vodafone seeing a 1200% increase in 4G data consumption over 2014.

Vodafone reminds us all that its 4G network ‘now reaches 95% of Australia’s metropolitan population’ with ‘around 2 million’ 4G devices connected to the network.