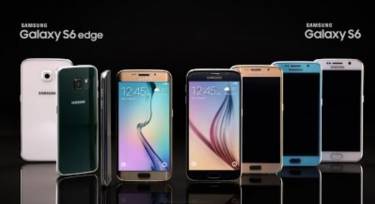 Metal edges and Gorilla Glass 4 on both sides, a non-removable battery with superfast wired charging and plenty more, Samsung wants to kill all competition.

If the Samsung Galaxy S6 were another plastic phone with a few new features, it wouldn’t have been enough - Samsung needed a game changer and the S6 and S6 edge are its versions of just that.

However, there are still unanswered questions despite the launch. While the fingerprint scanner has ‘enhanced touch’, does this mean instant touch recognition, or do you still have to swipe?

Has Samsung added to and improved its gesture controls?

Is the phone waterproof like the S5? The specs make no mention of IPX ratings, so perhaps this feature as seen on the S5 has been removed.

And what happened to the microSD card slots which seem to have been removed?

What we do know is what Samsung has shared, which it did in a strong presentation that was a step above its previous efforts, being smoothly businesslike and wrapping up in 45 minutes, with a 45 minute post-launch ‘talk show’ going over the main points again with three excited hosts.

You will be able to watch the launch event stream here at Samsung Mobile’s YouTube page, although at time of publication the 45 minute launch video and 45 minute chat show have not been posted yet.

There are two shorter videos, embedded below, while much more information on both handsets plus the new VR headset can be seen here.

Samsung promised the best screens, the fastest 14nm 64-bit processor, the best cameras front and back able to take what appears to be remarkably good low-light photos and videos, wireless charging, an inbuilt battery offering super fast charging with 4 hours ‘basic’ use in just 10 minutes of charge, the best LTE connectivity, a new Samsung Pay payment system compatible with magnetic stripe devices and NFC, a simplified and improved UI and more.

Quad HD screens are now the norm, with the S6 and S6 edge having Super AMOLED 5.1-inch screens with 577 pixels per inch, promising ‘enhanced outdoor visibility with a brighter display (600cd/mm)’ for anytime, anywhere access, even in the bright sun.

The S6 edge screen can be customised to display different colours when up to 5 different contacts are calling, better keeping you in touch with your most important contacts across family, friends and work.

Samsung’s speakers also spoke at length about ‘design with purpose’, a simple philosophy, relentless innovation, listening to customers and Samsung’s most beautiful smartphones ever.

On the design front, Samsung has made its devices ‘shimmer’ thanks to having Gorilla Glass 4 on the front and back, which is 50% stronger than Gorilla Glass 3, with metal edges that are 50% stronger too, prompting Samsung’s speaker to exclaim that ‘it won’t bend’.

And with the Samsung S6 edge, the company has gone one better than the Note Edge by featuring curved edges on both the left and right hand side of the screen.

Both S6 and S6 edge are also compatible with a new Galaxy VR headset specifically designed for the S6 family.

Due on 10 April 2015, pricing has not yet been announced, however with 20 countries on the initial launch list, it appears Australia is on that list with a local representative saying they will arrive in Australia ‘shortly’.

Samsung’s CEO of its mobile division, JK Shin said: “With the all new Galaxy S6 and Galaxy S6 edge, Samsung is offering what’s next in mobility, along with a new standard to drive the global mobile agenda.

“By listening to our customers, and learning from both our success and missteps, we continuously push forward new technologies and ideas. With a reimagined design, robust partner network and novel services, the Samsung Galaxy S6 and Galaxy S6 edge offer users the ultimate experience in smartphone options.”

Samsung Mobile Australia’s VP of IT and Mobile, Prasad Gokhale said: “I’m very excited to confirm that the Samsung Galaxy S6 and Galaxy S6 edge will be arriving in Australia shortly. The new devices integrate some of Samsung’s newest cutting edge technology to help make the lives of Australians more efficient every day. I look forward to sharing more information closer to the launch date.

“The new Galaxy S6 range demonstrates Samsung’s commitment to developing beautiful technology that brings innovation and performance together in an amazing device.

“We look forward to sharing more information closer to the launch date.”

So, what is some more detail on the new features?

Gorilla Glass 4 with ‘an array of colourful jewel tones’ sets off the ‘White Pearl, Black Sapphire, Gold Platinum, Blue Topaz and Green Emerald’ colours that have a ‘unique visual texture as it reflects natural light.’

Samsung used the term ‘only Samsung’ in the way you’d expect to hear Apple say ‘only Apple’, noting the new design for both models ‘required first-of-its-kind glass crafting technology and unmatched quality control’.

The front and back cameras now have F1.9 rather than F2.4 as with the S5, letting in more light for what was demonstrated as being brighter images in still photos and videos, with Samsung directly comparing the S6 against the iPhone 6.

The front camera is 5 megapixels while the real camera is 16 megapixels, with larger piexls on the sensor, real-time HDR, automatic smart optical image stabilisation, a better white balance feature and the ability to double click on the home screen to bring up the camera in ‘0.7 seconds’.

For wired charging, this is claimed to be 1.5 times faster than the S5, ‘providing about 4 hours of usage after only 10 minutes of charging. Samsung says both models charge 50% faster than the iPhone 6.

The processor, which is presumed to be one of Samsung’s own Exynos processors, has four processors running at 2.1GHz and another four at 1.5Ghz for an ‘octacore’ configuration.

The processor is the ‘world’s first’ 14nm 64-bit processor, with 3GB of LPDDR4 RAM blended with ‘UFS 2.0 flash memory’ for ‘’higher performance and enhanced memory speed with lower power consumption.’

Samsung Pay, which sounds just like Apple Pay, goes a step further than NFC compatibility and ‘tokenisation’ - it apparently uses Magnetic Secure Transmission or MST to magnetically send the info a card readers expects when you swipe a card.

Samsung boasts this makes Samsung Pay the most compatible mobile payments system available, especially with only 10% of mobile payment terminals in the US supporting NFC.

The company also talks up its ‘KNOX’ feature for business and enterprise security.

Samsung has also shared that its new Gear VR headset, specifically designed to work with both the S6 and S6 edge, is 15% smaller than the original version for the Note 4 and has straps ‘ergonomically designed’ to give ‘better weight balance, while mechanical ventilation supports an extended VR experience.’

Is it better than the iPhone 6 and 6 Plus?

On paper, in many ways, both models are definitely better than any other phone on the market. However, a phone isn’t just its built-in features but the entire ecosystem, something Apple excels at.

Apple's stellar ecosystem and extremely popular iPhone 6 and 6 Plus ensures Samsung still has incredible competition to contend with despite the new S6 and S6 edge, but when hasn’t that been the case?

On a personal level I will need to compare and contrast both models of the S6 with both iPhone 6 models, but Samsung has certainly gone all out to dramatically upgrade the design and feature set of the S6’s to present Samsung’s strongest challengers yet to the world.

It's the upgrade they really needed to deliver and Samsung has well and truly set the S6 cat amongst the attack of the Android clone pigeons, and done a lot to answer both iPhone 6 models. Whether it's enough to restore profitability is yet to be seen but on first impressions they've done a fantastic job at laying the foundations for Samsung's best Galaxy sales ever.

S6 and S6 Specifications are as follows: