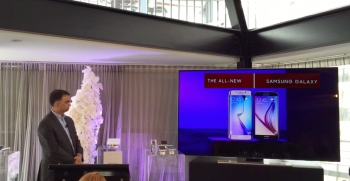 The full video of the S6 and S6 edge launch in Australia can now be seen here.

Ray Shaw was first with his story entitled ‘On the edge of another Galaxy - first looks’.

Then I Samsung’s media release in an article entitled ‘Samsung Galaxy S6 and S6 edge arrive in OZ, prices match iPhone 6/6 Plus’.

This was followed by Stephen Withers in his article entitled ‘Up to 6GB a month for Samsung Galaxy S6 and edge on Optus’.

Also being published shortly by Stephen Withers is an article with Virgin Mobile pricing - no word at time of publication from Telstra or Vodafone, however, although it is undoubtedly coming later today or tomorrow morning.

The notes below are me typing what Prasad had to say, there’s a little paraphrasing here and there but you can see it pretty closely matches the video embedded a couple of paragraphs below.

I also have a second video which shows the functions that the ‘edge’ on the S6 edge offers, as the S6 edge is very different to the capabilities of the Note 4 Edge. The Note 4 edge is much more capable, but it is only on the right hand side, while the S6 edge is on both sides, letting you choose which one you want to use.

It doesn’t appear that you can use both edges at the same time if the settings screen is anything to go by - you’ll see in the video below the launch video, after which I have my typing of Prasad’s talk.

Samsung Galaxy S6 launch above, the 'edge' settings screen on the S6 edge below, followed by notes from Prasad's talk below.

Here’s what Prasad Gokhale, Vice President - IT & Mobile - Samsung Electronics Australia said during the S6 and S5 edge launch in Australia - SEE THE LAUNCH VIDEO ABOVE for the full experience:

Note: an example of our big screen leadership

A couple of years ago launched tap and go.

Not saying we are the best, we are trying our best.

2nd mantra - how do we get feedback from customers and incorporate into products and services.

We have listened to the feedback of customers from today you will be able to see Samsung in a different light - leading the world in design, craftsmanship and performance.

Those who have thought S5 and what happens next - we will redefine the category of mobility - phones, tablets, wearables and where it takes us too.

important the passion is meaningful and delivers today. Introduce you to all to the best device ever launched by Samsung in Australia and the globe.

Bring out the future of smartphones in terms of screen tech - going to make sure that we receive a device each to lay our hands on.

What’s most important - these two devices are really - they’re no bounded by convention. The edge goes beyond - strong, beautiful and brings you a new immersive experience.

We used premium metals, glass - what it does - you can’t bend the devices, they are very strong. Also very light - these two things matter.

A lot of effort to go beyond across the Australian lifestyle - the way the phones work.

How difficult it has been to build the curved tech - we are the only brand that can do that at the moment.

It’s not about innovation on the top level or outside - we have given birth to a new baby and it is powered by high quality DNA on the inside.

Very powerful and secure - not just about Android or Samsung security - we are delivering security to the kernel layer. Click, flip and it’s secure.

Is it made for Australia with the GS5 - what’s the story going forward?

Vivid bright and fast cameras - help to capture the best moments in the fastest way. Low light - capture the low light photo.. and you will love it, please try it yourself - compare it to other phones.

An adaptor which support fast adaptive charging - use it for four hours with the charger supplied in the box.

Removed microSD card? Yes - but we are including 2 years free subscription to OneDrive - 100GB on One Drive. Aussies have access to LTE and Wi-Fi - it should be no problem accessing the cloud.

Minimum capacity is 32GB - better than other phones - goes to 64 and 128GB. Enough latency built into the device and cloud for storage support.

With microSD people could move content - but we have a SmartSwitch solution - works seamlessly, supports meta data - even if you are moving from iOS we are making sure it works seamlessly.

We believe we have done a reasonably good job this time very comfortably without any pain.

UX - people say to us - your phones are too difficult - iconography we don’t understand.

Wherever relevant we have added context, we have removed unnecessary applications. To support that we have built a beautiful smart manager on the device a simple app that tracks battery, malware status, how much is your data being used - it’s fantastic and allows a customer to be free.

That’s how we look at the UX and then we take it to the next level - we integrate it into the platform. We have integrated our own Octa-core processor. All Samsung now - we are not reliant from anyone from San Diego or elsewhere. A 14nm processor - super thin - nobody has it - improves power consumption by 40%.

Play fantastic car racing games - it doesn’t heat it. Enables us to improve battery life, render content better and a great job with the camera.

In terms of other Australian services - tap and pay - it will come to all Australians soon - it will work with Westpac and CommBank. Samsung Pay? It is different from Tap and Pay.

That is a solution for the US - a mag strip based payment system - they don’t have the chip based systems as much. We are working with Aust banks - how do we bring Samsung Pay to Australia so watch this space - we will come back to you soon/

In terms of music - we have launched n Australia our music streaming service Milk. Milk on all these devices and out of the box devices coming forward we will be offering Milk services included in the box.

Please experience the Milk service. Have a look at the music service and how it works immersively through the device - we have not just launched a service to compete with Spotify - we want to give customers a choice to use and play music in a contextual way on the go and have fun with it.

In terms of relevance for Australia - one of the issues is we have ignored - not deliberately - our enterprise customers or SME customers or the prosumers.

What we have done this time is we have worked tirelessly with partners like Microsoft, MDM, mobile iron, blackberry, oracle and more - to make sure our devices powered by KNOX - deliver a great enterprise grade security solution that is relevant to Australian enterprises. we will organise a separate session to showcase the power and capability of S6 for the enterprise.

Also with the Note 4 - a partnership with Belkin, Mont Blanc and Swarovski. We will extend that further - a lot of accessories supported by those customers. also quality accessories created by Samsung.

Look at the edges of your phones - they get scratched - our accessories will ensure that doesn’t happen.