US smartphone shipments drifted lower by 5% in 2Q2020: Canalys

The US smartphone market saw a 5% year-on-year decline in shipments for the second quarter of 2020, the technology analyst firm Canalys says, adding that 31.9 million units were shipped in toto.

The figure represented an 11% quarter-on-quarter rise, with shipments have been sharply hit in the first quarter due to the COVID-19 pandemic.

And, in an ironical twist, at a time when US criticism of all things Chinese was increasingly on the rise, the percentage of devices made in China shipped to the US during that quarter rose to 70% from 60% in the corresponding quarter a year ago, the company noted.

Canalys analyst Vincent Thielke commented: “Tensions between the US and China have escalated in recent years, creating a perpetual state of uncertainty for all smartphone vendors except Samsung and LG.

"The worsening relationship has resulted in extreme instability that has global onlookers eagerly awaiting November’s presidential election. This may guide the US-China trade war into a new phase of détente – or reignite flare-ups.” 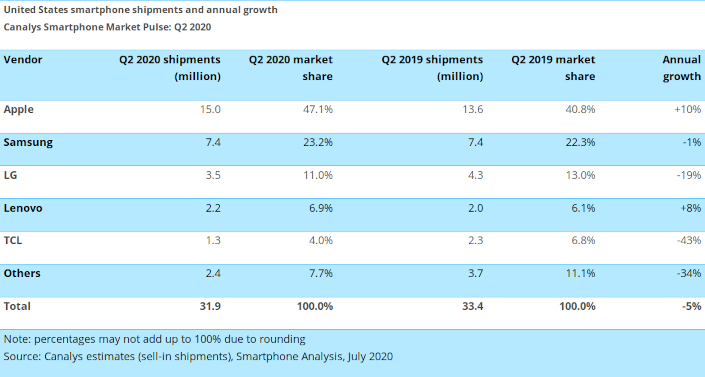 Canalys said the key reasons for the rise in sequential market growth were the fact that Chinese factories had resumed business at the end of March and stores had reopened in May and June.

Apple was the top vendor for the quarter, shipping 15 million units, a domestic record, with second-placed Samsung shipping less than half that number: 7.4 million units.

Canalys said Apple shipped more than 15% of its flagship iPhone 11s than the previous year's best-selling device, the iPhone XR. The launch of the iPhone SE enabled Apple to grab 47% of market share for the quarter.

Numerous point-of-sale closures followed the saturation of Q1, and Samsung became dependent on its low-end Galaxy A10e and A20 devices to prop up shipments. 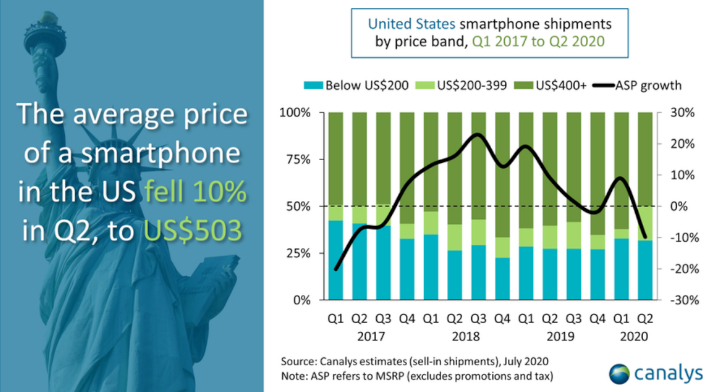 Thielke said, “As the coronavirus pandemic forced consumers to stay at home, 5G adoption in the US failed to take off. Store closures and virus fears limited interaction with demonstration models, tight consumer budgets further constrained spending power, and with scarce 5G network coverage in American suburbia, consumers saw plenty of reasons to buy a 4G device instead.

"Despite the lacklustre 5G rollout so far, strong carrier marketing in coming quarters will be instrumental in catalysing a multi-year transition period from LTE to 5G.”

In the US, the federally-subsidised Lifeline program provides discounted phones for people with low incomes, Canalys said.

As millions found themselves out of work, distributors were increasing orders for ultra-low-end Android smartphones from lesser-known brands, such as Unimax and Wiko, for qualifying citizens.

Thielke commented: “Greater unemployment has cut consumer choice, in some cases restricting the ability to buy a new device or cover phone-related expenses.

"With economic challenges likely to persist, the sub-US$400 segment is poised to gain more prominence, particularly as Google and other Android players increase their exposure to the low-end and mid-range segments.”

More in this category: « IDC says Indian smartphone shipments expected to recover in second half of year Microsoft re-enters mobile phone space with foldable Android device »
Share News tips for the iTWire Journalists? Your tip will be anonymous