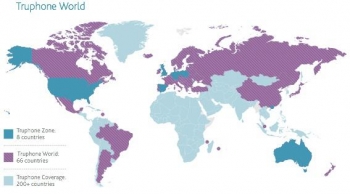 Multi-national mobile network operator Truphone will soon make its plan inclusions available in a total of 66 countries around the world.

Truphone's distinctive feature is a patented multi-number SIM that can provide local numbers in up to eight countries: Australia, Hong Kong, the UK, the US, the Netherlands, Germany, Spain, and Poland. This part of the service means users can be rung by their contacts in one or more of those countries without the expense of an overseas call.

The other important difference is that where Australian carriers tend to express plans in terms of 'funny money' (you know the sort of thing: "$600 value for $60" thanks to calls being charged at higher rates than you'd normally pay), Truphone's plans are expressed in voice minutes, SMSes, and gigabytes of data.

For example, $159.50 gets you 2000 minutes, 2000 SMSes, and 2GB of data a month. "We took a conscious decision to do it differently," Truphone Australia managing director Alex Blinko told iTWire.

Those allowances have been available for use within any of the eight countries, but from 2 June, Truphone will allow its customers - new or existing - to use their allowances in an additional 58 countries.

This is in response to a customer survey that found "three out of five were going overseas every quarter," Mr Blinko told iTWire, at least in terms of at least one employee of the organisation travelling internationally. And a survey conducted earlier this year for the company found more than half of Australian businesses regularly send at least 10 employees on overseas trips, and a similar number of respondents thought communications costs are too high when employees are travelling internationally or contacting people overseas.

More than 80% said they would be interested in a provider that offered mobile service in multiple countries at local rates.

Truphone offers shared plans (starting at $627 a month) where multiple employees use a common pool of allowances, and this smooths out the peaks and troughs of individual usage.

The selection of the extra countries was not random, he explained, but based on real-world traffic patterns. The 66 countries cover 72% of international travel routes and 82% of global GDP.

"We are a niche, targeted business," Mr Blinko said, so Truphone aims to meet the needs of customers with global needs. One local example is gaming machine manufacturer Aristocrat.

The benefits of Truphone's plans are usually evident to companies that often send employees overseas, but "we do a lot of tailoring" for customers with more complex needs, he added.

Truphone CEO Steve Robertson said "Our unique global mobile network connects people across international borders in a way which no one else can match. We bring businesses closer to their international contacts and give them an unparalleled global service experience. Today we're going a step further to help make our customers more productive in 66 countries.

"Last year data usage increased five-fold in some places; and the internet has opened up a new dimension to global trade. The urgent need of businesses is there right now, Truphone World will enable businesses to use their mobile devices around the major business centres of the world in the Americas, Europe, Asia and Oceania."

More in this category: « ZTE wants to become ‘As easy as ABC’ with its V969 Is this the world’s coolest smartphone? »
Share News tips for the iTWire Journalists? Your tip will be anonymous